Ok… the first days of living in Montreal.

Initially, there was a lot of dining out… there was no stuff to cook with… no appliances… no coffee machine. I will say that the food in Montreal is fantastic; it’s a takeout culture.

We’ve discovered things like Syrian, halal, and kosher foods (fantastic for La Niña who is very allergic to corn… the food is very pure). And, it’s probably sacrilege, but after the oven arrived, I started to bring home Challah dough braids that we can cook in the oven (the baking drawer to be specific… I was unaware that such a thing as a baking drawer even existed). The ingredients are simple and uncomplicated… and the bread is fun.

There’s been lots of sleeping on the floor, which has destroyed one of my shoulders. I bought a lightweight air mattress for backpacking/biking (because for some reason I think that I still do that) and it’s really light but sounds like crinkle wrap every time I move, which is not conducive to sleep. Dumb dumb dumb.

Our house is old. It creaks a lot and makes noises that old houses make. It also has a unique history. The house was built by the architect who planned Pierrefonds (our community). It was his personal house and unlike the rest of the community (which sprung up quickly), he bought the land and waited a few years before building a house. As such, it is completely unique and with every friend La Niña makes, the family suddenly shows up so they can see the inside of the house.

We think the architect (his name was Michel) wanted to see all the seasons and see how the other houses came together before he built his house. As such, we are discovering all kinds of neat things… like you don’t need an air conditioner when it gets hot (the flow of air in the house and the shape of the ceiling keeps it cool), when it rains you don’t need to close the windows (the angles of the walls/roof keep water away from the house), the fireplace is intertwined with every section of the house (it will likely heat the entire house in the winter). It’s soundproof (even with the open concept) and super quiet (I startle every time someone makes a noise).

We’ve found loads of “easter eggs” like stash spots under the floors and hidden nooks/crannies that probably had a function at one point. The house was once “off the grid” likely because of the era it comes from. If we put up some solar panels, we would definitely be self-sufficient in an ice storm.

So far… we love it… except…

The previous homeowners presented us with a unique challenge. It wasn’t a pinky-orange-I-love-Cuba colour scheme. Or the rather erratic and mind-numbingly unique angles created by the cathedral ceiling. The openness or even the very large, yellow stoned fireplace that dominates the entire house… making it difficult to find a unifying colour. 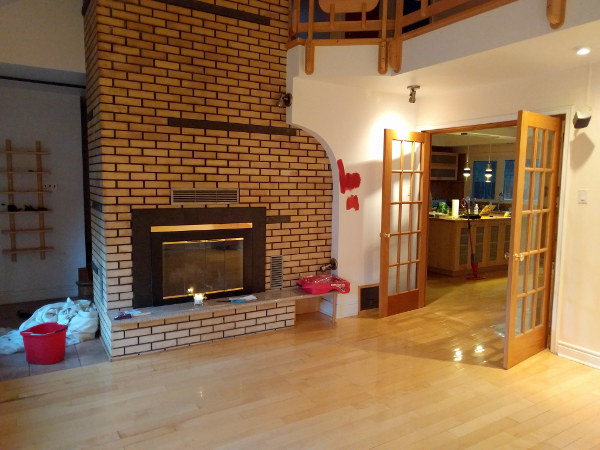 It was the fact that they were smokers. And, for 12-years they puffed cigarettes in the house until nicotine became a part of everything. I swear that I completely scrubbed this house within an inch of its life… did the time consuming whole 9-yards: threw out all fabrics, washed ceilings/walls/floors/bricks/doors/windows/mirrors with vinegar. Soaked all the outlet covers and light covers in vinegar. Then cleaned with a strong odorizing cleaner (like pine sol, Murphy’s oil soap, glass cleaner, etc).

Check out the nicotine in the window grooves in the half-bath (after partial cleaning). 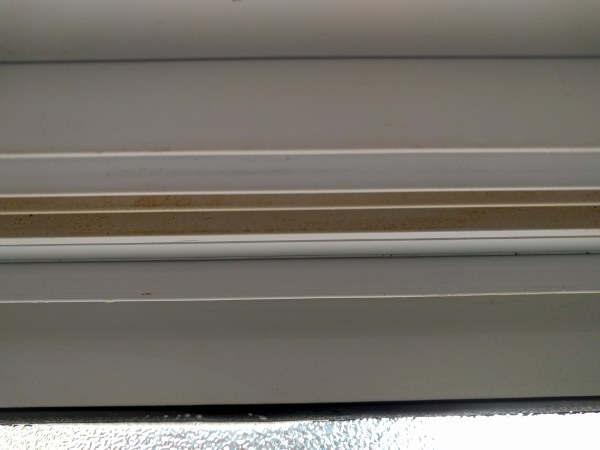 The white paper towel turned yellow. If it were fireplace soot it would be black. 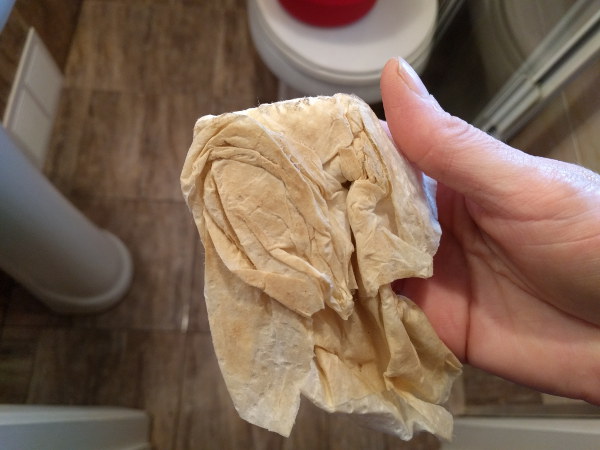 The resulting cleaned windows. It comes off easily but not completely. Think of this in your lungs and in your bloodstream. 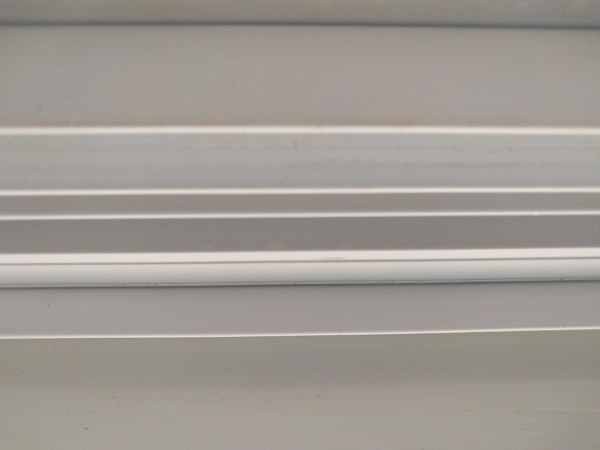 I had to clean the window screen several times to get the smell out. As it stands, after one 3-hour scrub and clean of the half-bath (a room the size of a closet), the smell has lessened but hasn’t gone away. I’m going to have to do the same thing again before priming and painting. The internets tell me I need to do this three times.

We even know the frequent paths of each of the smokers based on the nicotine they preferred: the husband would watch TV and smoke… then walk to the half-bath and smoke. The wife would smoke outside on the porch and in the dining room. Never upstairs (the grandkids kids rooms) or the kitchen (for some reason). The son smoked in the basement in what was once a music studio (he was an audio technician). I can now tell the difference between the smell of a fireplace (when it’s windy outside) and cigarettes.

But even after all this scrubbing, the smell still persists and we’ve since moved to the big guns. The most obvious is a furnace cleaning/disinfecting, which has never been done in the 60-years this house has been in existence. I know this because the original mouldings cover for each of the grates are still on the walls (uncut) and there are no holes in the ductwork for cleaning. 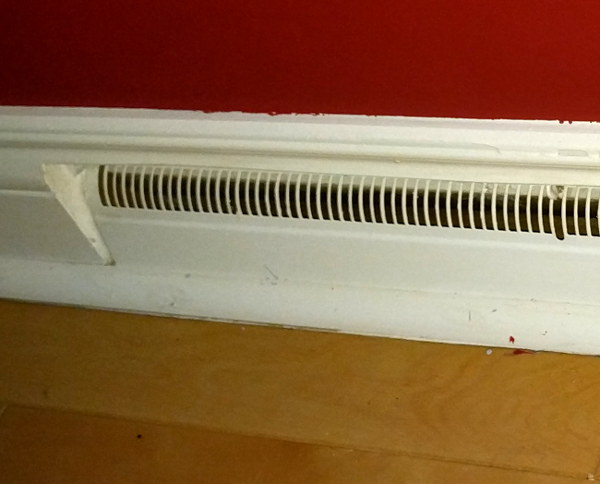 Next is an addition of air purifiers: the Dyson Air Purifier to be exact because it is ruthless when it comes to air quality. I know because the app tells us whenever we open a box or come in from the outside and blasts us with purified air. This completely transformed air in the studio basement.

Then there was the paint. For the first time in my painting history, I used a primer that wasn’t added to the paint. And, not any primer, but the sticky, stinky, messy, frustrating, smells-like-urinal-pucks primer used by professional painters who want to seal walls. Nothing is coming out of these walls: smells, stains, or angry spirits. 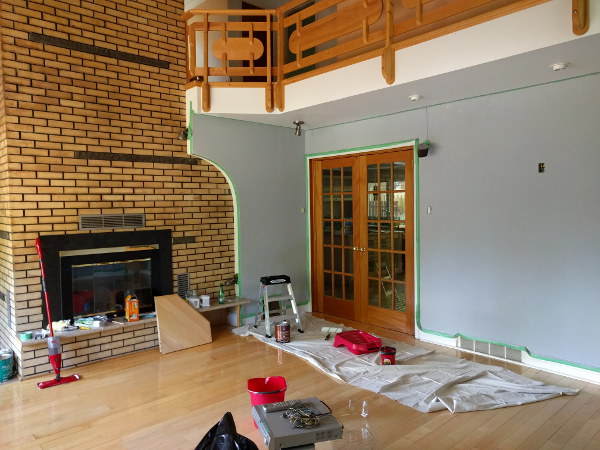 If you simply paint in a place where there were smokers, in 3-months the nicotine works its way out of the walls and you have to paint again. There is a new and troubling concept circulating around in medical communities: that of 3rd hand smoke. I suspect that as this concept becomes more widely know, it could impact the value of a house.

The goal here was to chemically change the nicotine and I swear the primer changed my chemical structure. But now, the living room smells like roses… literally… because of the chemical reaction. I don’t know how they do it but the only smell coming from the living room is the smell of roses. 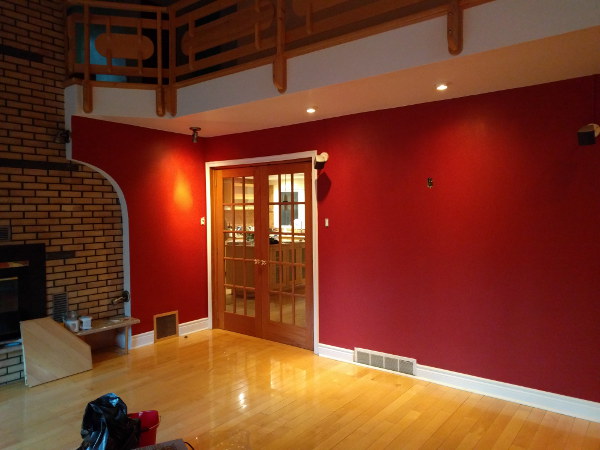 Not all rooms needed “the primer,” only the smoking rooms. Thankfully the library didn’t need a primer and we could create a whiteboard wall, which has already come in handy with the French tutor. 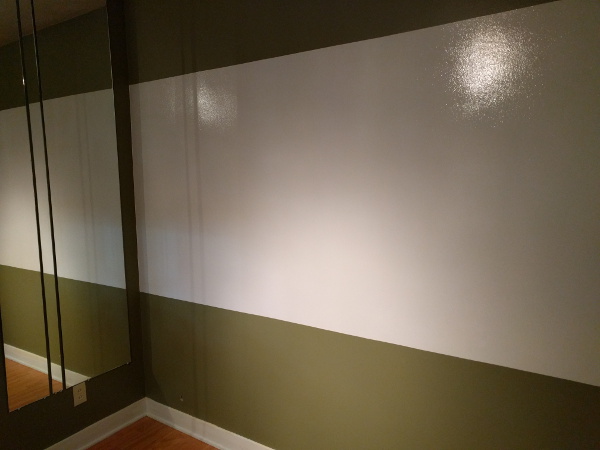 0 comments on “Those first days in Montreal”Add yours →