Ahhh… la belle ville de Québec is my favourite city in all of North America… perhaps the world. It’s old. It’s very European. The food is fantastic. The people are friendly. There is always something going on. Best of all, the city is built like a layer cake; you keep carving off section after section and there’s STILL more too explore. It’s a never-ending experience.

The city is tiered. The oldest part, le Vieux Québec (1600s) is down by the waterfront; here you’ll find old houses and streets that look a heck of a lot like Diagon Alley. Wandering the streets means being accosted by performers, people in period costumes, and discovering weird things in every nook and cranny. It was here that we found rainbow poop emoji pillows for $5. 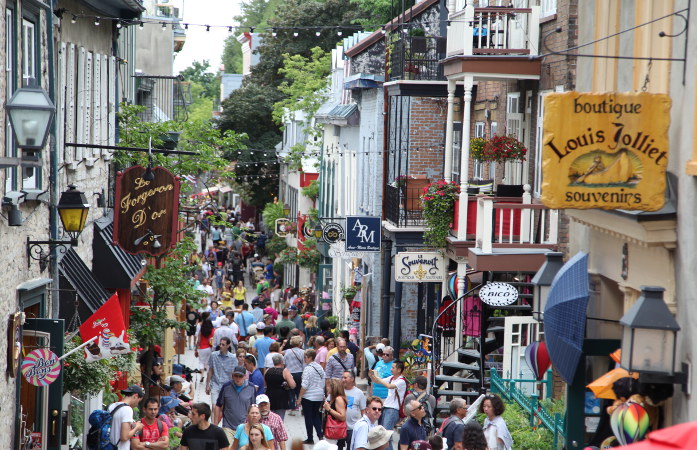 To get here (or out) you don’t have to climb hundreds of stairs and walk down steep streets. Instead, you can take the very civilized funicular, which may be the only one in Canada. They only take $2.50 in cash so make sure you have it before getting into line (or be willing to pay the $5 service fee needed to use the cash machine). 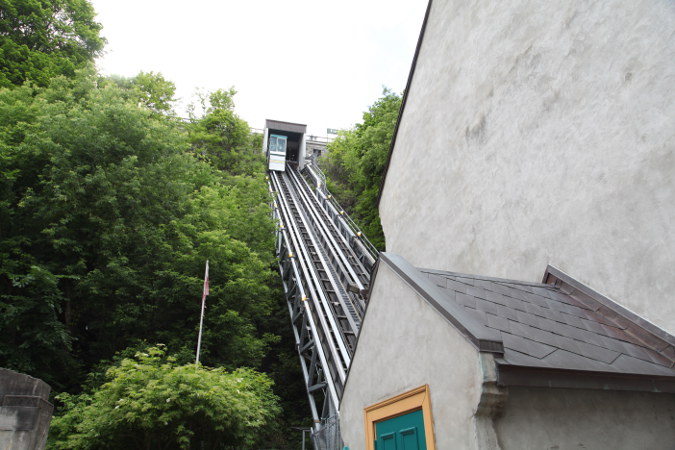 If in the old city, I highly recommend a meal at Le Lapin Sauté (the cooked rabbit), which reminds me of something that you’d find in Hobbiton.

If you’re not hungry, certainly hang out in the park outside for great people watching. We somehow managed to snag one of the only two-person swings in the park and EVERYONE from that point on hovered close by in hopes that we’d vacate. It was like playing a game of musical chairs and we had the last chair. We eventually left just to see what’d happen. 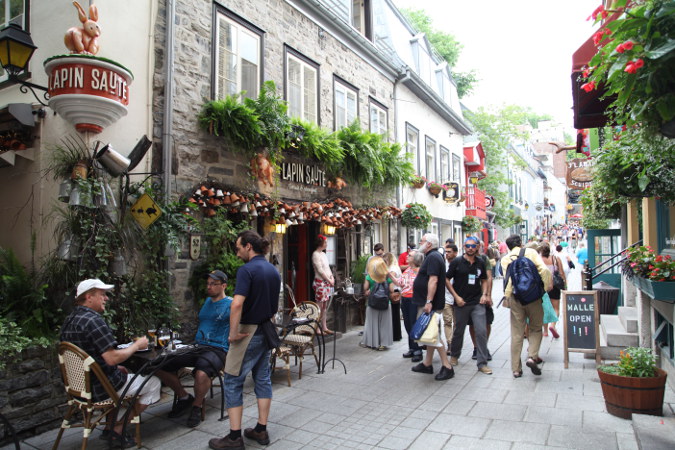 Above Vieux Québec is the 1700s version of the city, marked by large stone buildings, rich decorative features, and the walls of a citadel. The building that the city is most famous for, the Château Frontenac, looms over the city. The photo below is not the Château Frontenac but rather the gates to the city. 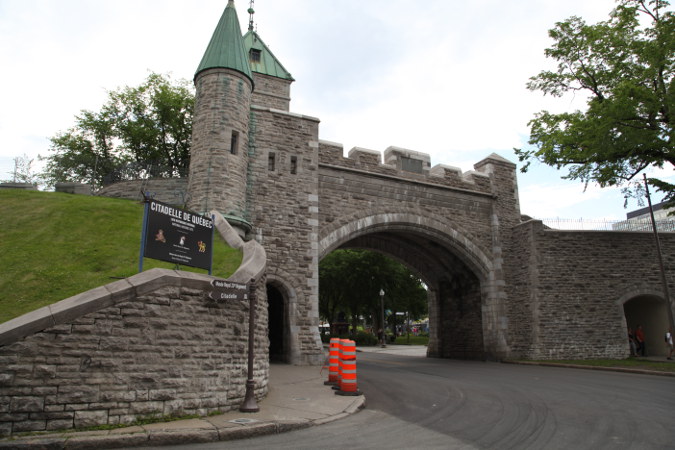 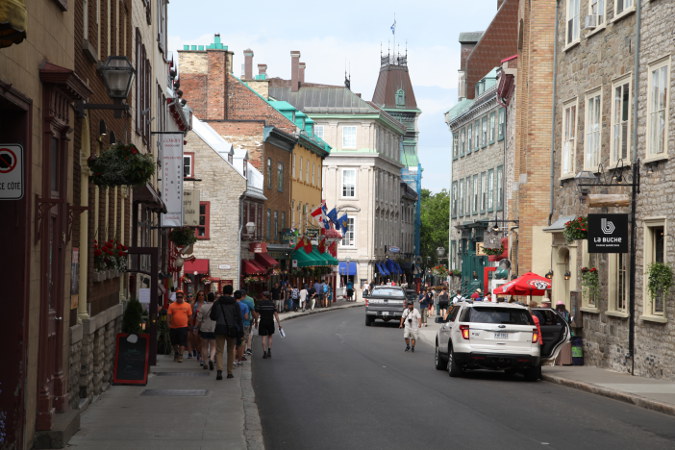 This layer comes from a tremulous time in Canada’s history when control of Québec city flopped between the French and English (and for a very brief time, Americans). The city was eventually ceded to the English in 1763, because France could no longer afford their colonies (both financially and politically). This was in the decades leading into the French Revolution.

Even though Quebec was controlled by the British, the Quebec Act in 1774 allowed the Québécois to openly speak French and practice Catholicism. I wonder if the British occupation of the city, and the French’s refusal to participate in the American Revolution, was the reason why Americans were able to take the city so easily. This only lasted a few weeks and the city went back to English control.

My favourite “nook/cranny” surprise was the discovery of a canon ball (later determined by historians to be a bomb) wedged in the roots of a tree. No one knows the real story behind the bomb but it’s unlikely that locals would just leave one sitting by a tree for centuries until the roots grew around it. It was likely used as a wheel bumper or decoration for whatever building sat there over the years. 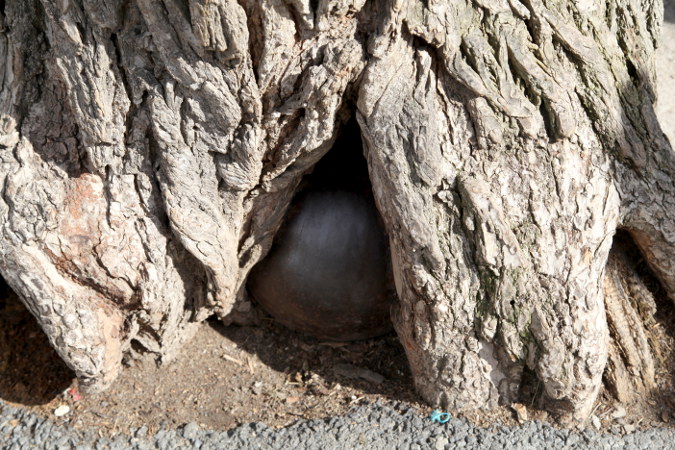 Outside the walls of the citadel are more streets filled with restaurants, churches, and parks. There’s always “something” going on in the summer and we happened to visit during Le Festival d’été de Québec (Summer Festival) so there was plenty of activity. As we were leaving (after a day of exploring), hordes and hordes of people were making their way down to this part of town for a summer concert. 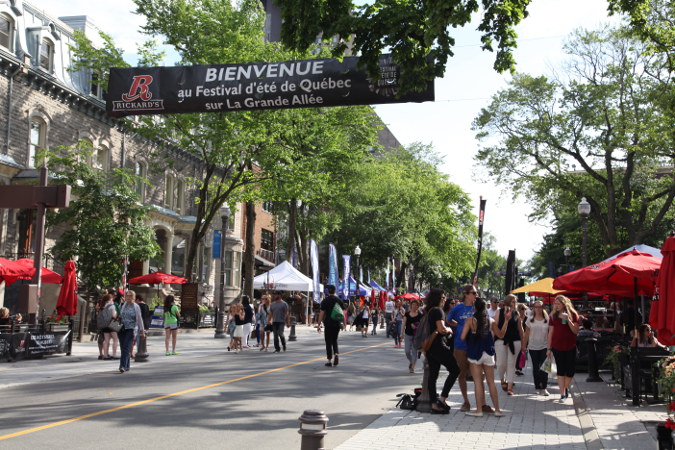 Speaking of surprises, we meandered into one church that’s for sale and discovered a book sale. It was a poignant reminder of where we were… all the books were in French. The add to the atmosphere, a guy with crazy wild hair was playing classical music at the front for everyone to enjoy. I love these little offbeat life moments.