The beach close to the lighthouse in Biloxi was the site of the “Bloody Wade-in” where civil rights activists waded into the water along the “white” section of the beach to protest racial segregation on Biloxi’s beaches.

There were a handful of protests, and on the third (1960), a mob armed arrived with chains, blackjacks, and sticks to harass the peaceful protesters who had arrived with beach balls and umbrellas. The situation quickly escalated and became violent in two separate incidents.

The first incident happened in front of a beachfront hotel. About 50-activists were quickly chased off the beach by the mob after people walked into the water. Most of the violence came during the second incident, further along the beach and across the New Biloxi Hospital. Here, a group of mostly women and children were attacked by the same mob.

One thing I find very interesting is you only see photos of men being assaulted… and not women and children. 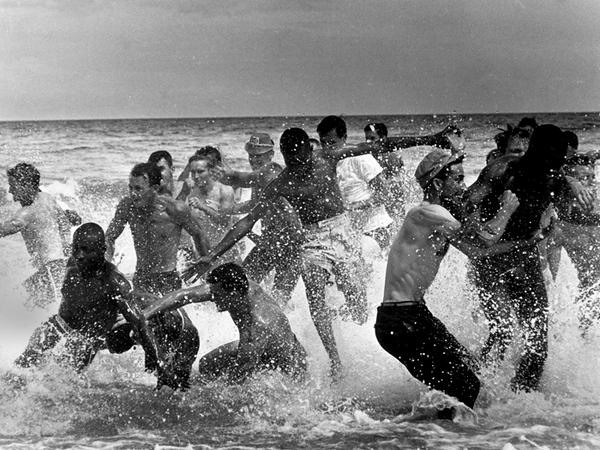 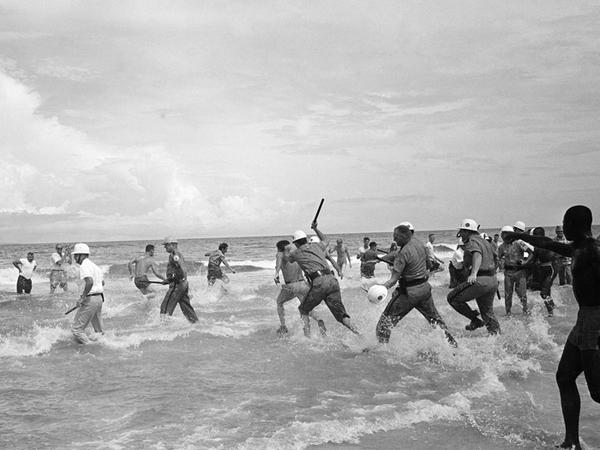 People were beaten, property set on fire, and riots went on for days in Biloxi. The wade-in did not end well and for days after the world watched Biloxi tear itself apart.

One of the relatively unknown but important outcomes from the April 24th violence comes from the New Biloxi Hospital, which was the location of the second round of violence. On April 28th, a 42-year old man named Sam Frazier arrived at the hospital with a brachial artery wound after being shot during the violence that followed the wade-ins.

Even though nurses and ambulance attendants were with the patient frequently over the course of two hours, no one even attempted to touch Frazier to stop the bleeding. Instead, a nurse simply covered him with a towel and Frazier was left to bleed to death in front of his family.

At some point, a doctor arrived who recommended Frazier be moved to a military hospital (because Frazier was a WWII veteran). During the logistical confusion that followed, the bleeding continued, the man went into shock, was left untreated, and he died on the way to the VA hospital.

The family sued the hospital and the case went all the way to the Supreme Court of Mississippi where it was determined that “Frazier was permitted to bleed to death, in the emergency room of appellant’s Hospital, through the concurrent negligence of the Hospital’s nurses and that of the doctor.” (New Biloxi Hospital, Inc. v. Frazier, November 26, 1962)

This case set a precedent in malpractice lawsuits. In the 1960s, racial segregation in hospitals was not viewed as a problem by lawmakers: many hospitals still had separate entrances for people of colour and in Mississippi, laws existed stating that medical treatment would be available to African Americans only after all the other patients were treated.

But, New Biloxi Hospital, Inc. v. Frazier, November 26, 1962 set the precedent to change this because hospitals had to uphold the standard and accepted duty of care regardless of the patient’s ethnicity, socioeconomic status, or whatever other prejudices exist. This opened the doors to other malpractice lawsuits and the beginnings of change. It was an important moment in medical history.

Ironically, this medical precedent was set in 1962, but the beaches in Biloxi would not open up to African Americans until 1968.