Tis a long weekend, that means that the Thursday night travel line-ups in Boston, Toronto, and Montreal were insanely long… and for my connections, I found myself just barely making it to my flight just because of the sheer number of people I had to wade through.

This line-up of people is waiting to get out of one of the arrival exits at the airport in Montreal… after 11pm. I live in a destination city now. 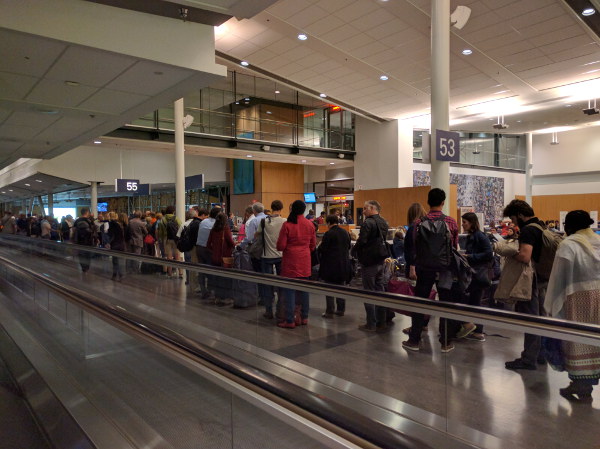 The number of people trying to get through the funnel-shaped exit at customs and immigration in Toronto took almost 30-minutes.

This mob of people are waiting to get onto a flight with the rest of us trying to get through to a different arrivals exit. 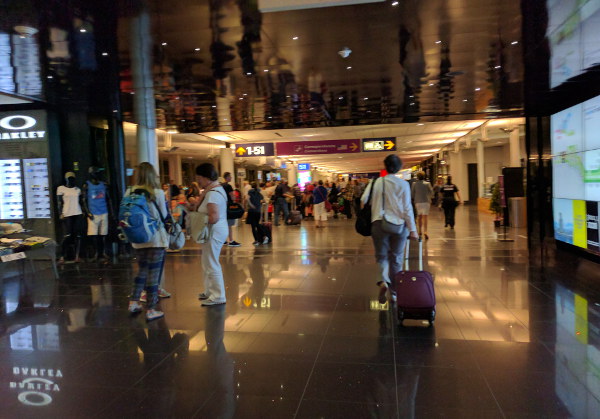 Luckily, the taxi queue was non-existent and I got to experience my bi-weekly panic attack about having to talk in only French. 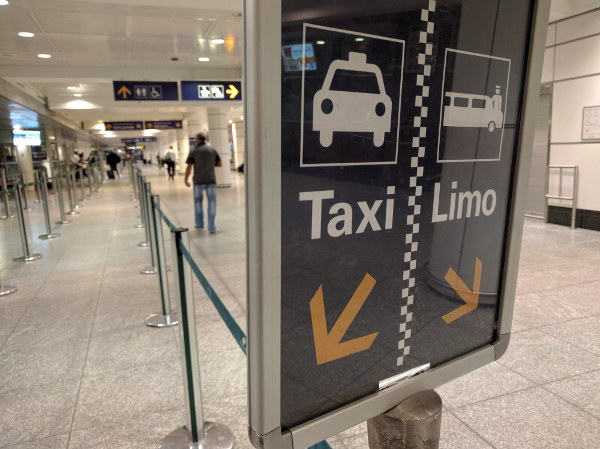 Before moving to Quebec, I read a blog where the writer talked about starting to avoid certain situations because of a fear of not being able to speak French. I now understand that… but I’ll take that fear head-on.

I was feeling pretty good about my French… and then I got my ass handed to me by my Thursday night cab driver. “Non. Ce n’est pas tournez gauche, c’est tournez à gauche.” He also said I’m not saying the name of my city correct, “C’est MonT-re-al et ce n’est pas more-real.”

He was a teacher and I got perhaps the best French lesson I’ve ever received in my life. He refused to speak English and he corrected everything that came out of my mouth. He later told me (en français) that my French was so terrible that I needed to attend a conversation group where people could constantly correct the pronunciation… and I needed to re-learn the French alphabet. Ouch! The good news is these groups are rather prolific in the city and also free.

I told him (en français) that my previous Uber driver only spoke Spanish and that French has made my Spanish better. Unfortunately, talking to my Uber driver in Spanish only destroyed any progress that I’ve made in Quebec. I’m now back to focusing on each individual sound at the back of my mouth.

I also learned a few phrases of Quebecois. I knew that the language spoken on the street in Quebec is not the same as the language taught in schools. But, I didn’t realize how different it is. This is an ongoing struggle for newcomers who learned French in school.

Anyway… back to Boston and earlier in the week.

This large group of children are all going to kindergarten this year… so starting next week. 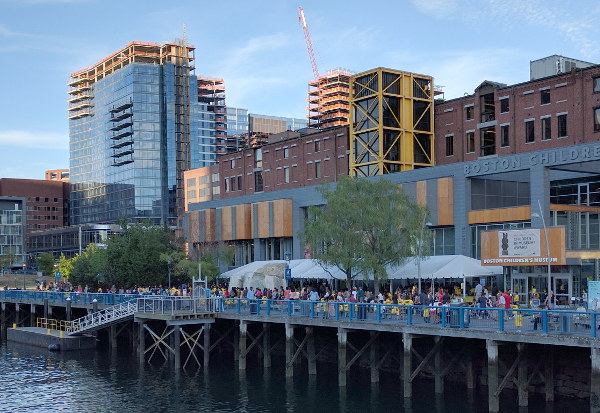 The Children’s Museum threw a huge party for kids starting school this year and the Seaport area was flooded with spunky, excited little 5-year olds.

I love elementary-aged kids and it’s encouraging to see their spunk and vibrant energy. They’re our future and they’re the ones that will solve the problems that we create today.