The underground world in Napoli is complex and rich with a history that surpasses that of the world above. 60% of the city is said to sit atop some sort of ruin, tunnel, chasm, or underground cistern. In many cases, entire sections of Greek and Roman cities were covered, abandoned, and then left undiscovered for centuries.

Archaeologists often try to purchase houses whenever they go up for sale in certain parts of the city because under each of these could be another piece of a puzzle that gives insight into Neapolitan history.

For example, the purchase of one house owned by a little old lady who lived there her entire life yielded an entrance into a massive 64AD Roman theatre (as seen on the Napoli Sotterranea tour); and, repairs on pipes in another apartment yielded an entrance to Emperor Nero‘s private access to the same theatre.

In the 5th century AD, the entire Roman market of Macellum was swallowed by a mudslide that sealed the streets for later discovery. It lay silently buried below a 12th-century church (San Lorenzo Maggiore), until exposed after the church experienced foundational damage during air raids in World War II.

So, if there are so many hollow chambers under the city, why don’t entire sections simply collapse (like parts of Paris and Fukuoka)?

The earth and rock in Napoli come from Mount Vesuvius, which has been spewing igneous tuff (called Peperino by the locals) and volcanic mud for millions of years. The entire city sits atop this extremely solid but malleable rock. And, for thousands of years, locals have been removing this tuff for use as building materials. Inadvertently, they’d been creating large underground chambers.

The tunnel we explored on our first day in Napoli is known as the Galleria Borbonica, built by the “Bomba” king, Ferdinand II of Bourbon; he lived in constant fear of revolution so he built an escape tunnel that ran from the palace to the armouries in 1853. The tunnel was big enough to move his family, horses, and soldiers between the two. It was also large enough to be used as a car park for vehicles impounded in the years following the Second World War. 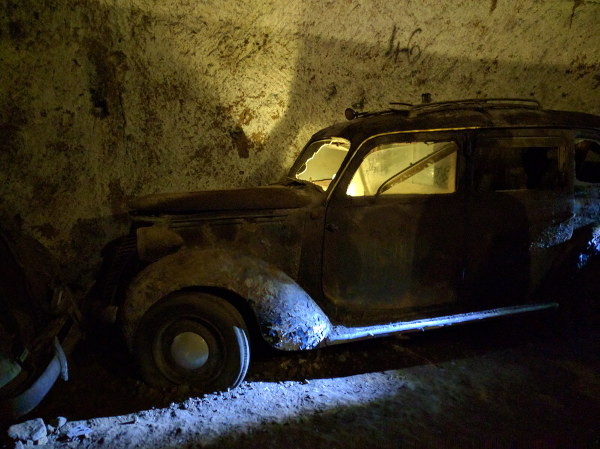 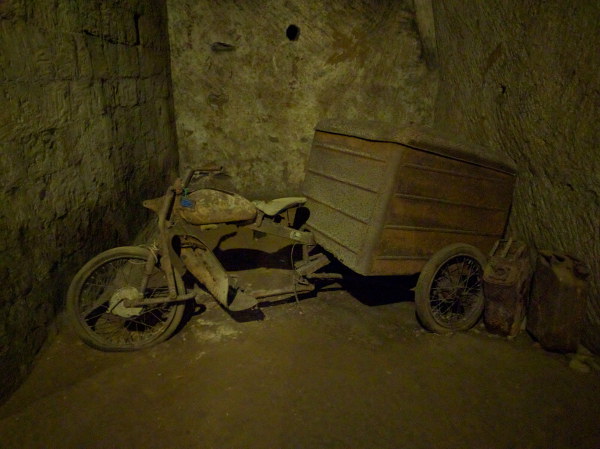 But, this wasn’t the first underground tunnel built under the core of the city; it merely connected what was already there and used by other residents for water and escape: the Carmignano (Spanish, 1600s) and Bolla (Roman) aqueducts.

The Bolla aqueduct runs on an angle from a water source near Mount Vesuvius and once supplied cisterns in Napoli, Pompeii, and Herculaneum. The Carmignano aqueduct was built by Cesare Carmignano and used channels that already existed. Both were abandoned in the 19th century after a cholera epidemic forced a modern upgrade to the city’s water system.

The tour starts with a descent down what seems like hundreds on uneven, stone stairs; the distance you have to walk underground is 167 feet. If you’re not paying attention, you’ll fall into the darkness.

You first see where Napoli residents hid during the American bombings of the city during the war. The walls contain a wealth of scribblings and graffiti that were used by archaeologists and historians to track down survivors for their stories. 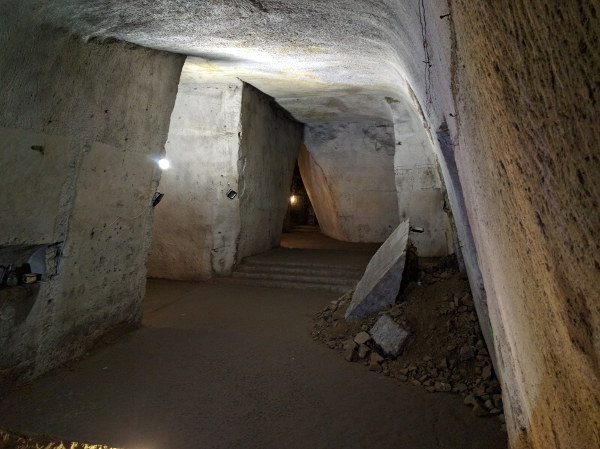 In the centre of the main part of the shelter lay communal beds that have long ago disintegrated into the dirt; the outline and some fibres are all that remain. Homemade toys are on display to show that kids used whatever they could find in play; they were allowed to run free in the caverns. It was these children that were later tracked down by archaeologists.

Large chunks of the tour focus on explaining how the different toilets work and how they were always located near the entrances to the underground. 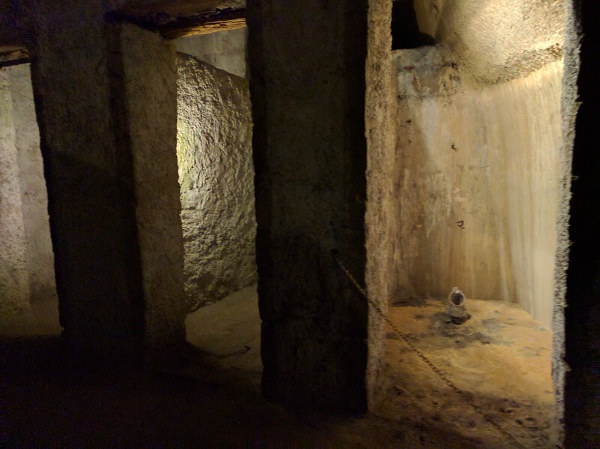 The second part of the tour takes you through the tunnels built by the “Bomba” King and showcases the cars that were left abandoned under the city. 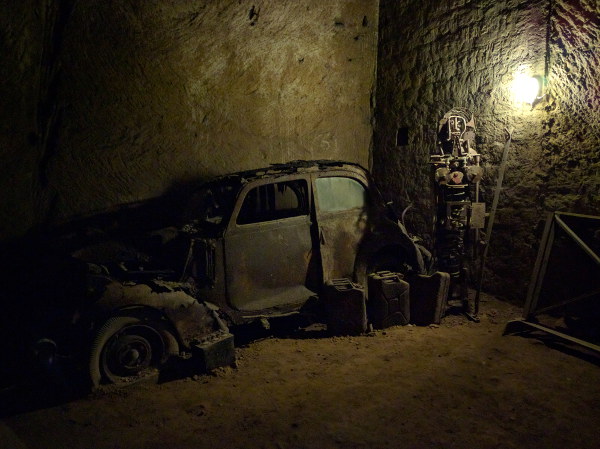 Some cars sit with interesting bits of garbage that were left behind during the tunnel clean-up. The tunnels were used by residents as a dumping area for decades. All of this needed to be cleaned out before the Galleria Borbonica could be opened up to the public. 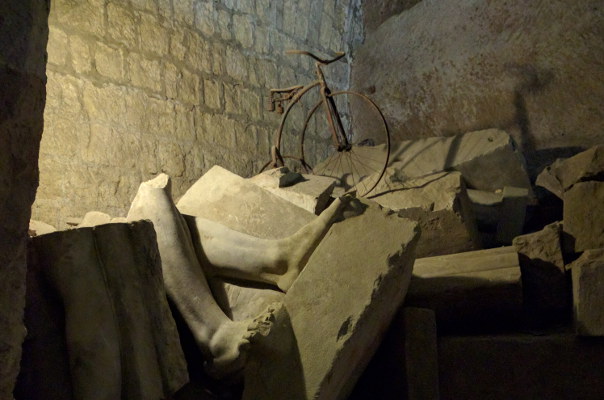 The third part of the tour shows the cisterns and gives glimpses into the lives of the pozzaro (the men responsible for maintaining the cisterns) and the “Munaciello” who (as folk legend has it) were men so good and stealthy at climbing that they would enter people’s houses at night and play tricks on residents. Apparently, the women of Napoli would often blame surprise pregnancies on the Munaciello. 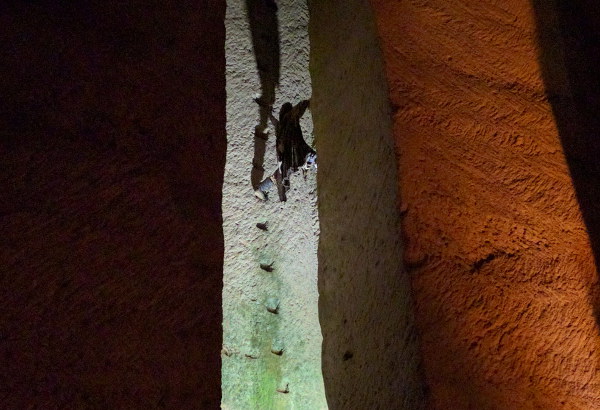 Finally, the tour ends with a walk past an elaborate underground nightclub, which reminded me of the secret underground scene of the Paris catacombs. 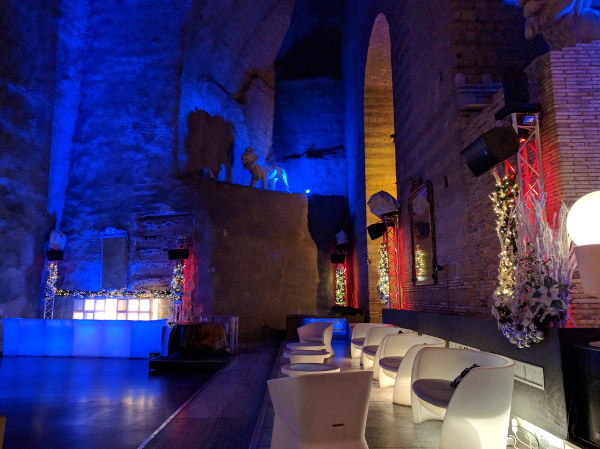