I’ll start this post by saying: the San Gaudioso experience is new for me.

I’ve studied osteology, graves, and death rituals for almost two and a half decades and I’ve never before seen anything like what I saw in Catacombe San Gaudioso. It is a completely refreshing and unique experience… like finding a new species of animal after years of only studying rhesus macaques.

Tour of the tomb starts with a descent under Santa Maria della Sanità, but unlike the descent into Galleria Borbonica, the journey down is not a long one. The tomb is just under the church and parts of it can be accessed via stairs or a sliding door from one of the smaller chapels.

The first section of the catacombs dates to the 17th century and was a burial place for the very wealthy or noted in Napoli: nobles, royalty, clergy, and one artist who requested to be buried with nobility.

There’s both vertical and horizontal inhumation; bones were laid out on platforms behind frescoes of that person, painted to depict their status and role in life. The skulls are the only body part imbedded in the plaster walls above each fresco because skulls were seen as beautiful and limbs and body parts were not.

The majority of the frescoes were painted by Giovanni Balducci, who is the only artist buried in the tomb (depicted on the right in the photo below). He refused payment for his work both in the church and in the crypt in order to secure a spot in the highly coveted space.

You can find one of his paintings in the church above, St. Dominic promoting the Rosary / the martyrdom of San Peter from Verona.

Men and women were not buried together except in a few cases where the very wealthy purchased “a couples tomb.” When you first walk into the ambulatory there is one example of a couples painting at the entrance. But, from this point on, the burials and frescos on the right are of women…

… and the frescos and burials on the left are of men.

Another burial practice common to Naples is body draining. Bodies were dropped into the catacombs from the church above through various holes in the floor. There are different holes for different sizes of people (skinny people, tall people, fat people).

Each body would then sit in a vestibule and decay. Periodically, the schiattamuorto would come and pierce the body to allow fluids to escape during the desiccation process. Towards the end of the process, when all of the flesh had rotted away, the bones were then cleaned and the bodies moved to the tomb or laid to rest elsewhere.

The 17th-century tomb containing Napoli’s nobility is not the only burials found in the catacomb. There is another, simpler tomb dating to the 5th century that once contained the bodies of early persecuted Christian leaders.

The original catacombs were sealed off shortly after Prince Sico of Benevento stole the remains of Januarius I from San Gennaro (the catacombs down the street from St. Gaudiosus). The closing of the catacombs preserved some of the early Christian paintings from this era.

How to Get There

The Catacombe di San Gaudioso is located under the Santa Maria della Sanità church in the Rione Sanità neighbourhood in Napoli. It can only be accessed from within the church and via a guided tour. Tours run every hour between 10am – 1pm.

Google Maps will take you to the general location of the church, but the city is layered so depending on how you got there you may have to take a street elevator to the church. Santa Maria della Sanità is located on the lowest level. 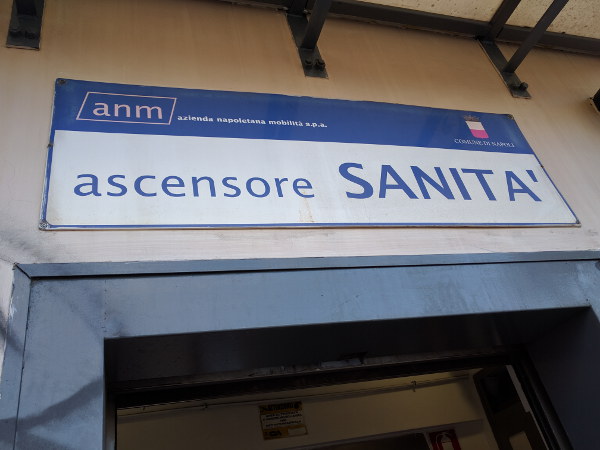