As a city, Napoli has let itself go. Seems everyone uses anything they can as their canvas and there is no attempt by officials to cover or clean. There are tags everywhere… possibly because there are gangs everywhere and they use the walls as a means of declaring their territory. 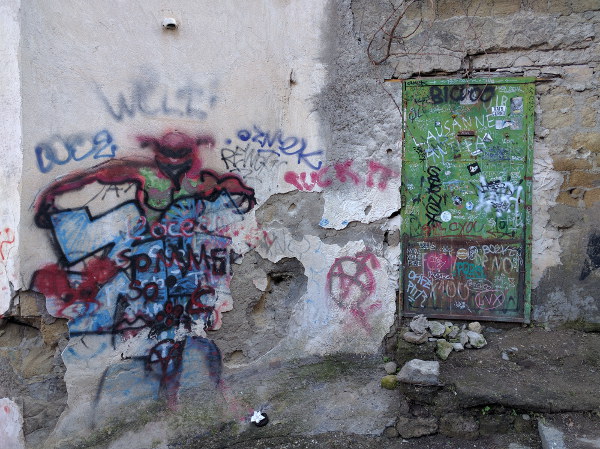 But, this is not new for Napoli. People have been defacing, signing, tagging, and drawing on their walls for hundred and hundreds of years. Historians use this to glean insights into the mental state of society, what people rallied against and even track down survivors. Places like the Galleria Borbonica and the catacombs are ripe with historical wall art.

And, amongst all the poop, dirt, and tags there are some real works of art. There are two artists that I was able to identify (below). The rest of the artists are a mystery for now. 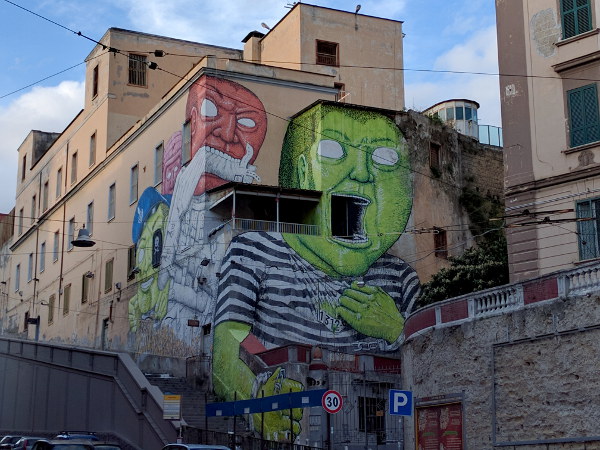 BLU is an Italian artist who hails from Bologna; his work can be seen all over Europe. He is also known to destroy his own work to make a statement.

The monetization of public works of art has become a bit of a sore spot for artists. We see this with Banksy all the time… a painting will go up and within a short period will disappear and show up in a gallery. Often, they sell for hundreds of thousands of dollars. Banksy has turned this around and will create art (sometimes movable/portable) in poverty-stricken communities to bring money back to that community.

For BLU, the monetization of street art is both a travesty and a contradiction. In an explanation via Wu Ming (on his blog) BLU believes that “After having denounced and criminalised graffiti as vandalism, after having oppressed the youth culture that created them, after having evacuated the places which functioned as laboratories for those artists, now Bologna’s powers-that-be pose as the saviours of street art.

And to add insult to injury, private financiers will sell the art to make money without the artist’s permission. So, on one hand, street artists are fined for their work when caught… and on the other, rich locals steal the art and sell it in galleries in the name of preservation.

I agree with BLU on this one. And, I like that his work in the photo above cannot be removed from the building.

C&K are street artists that also hail from Italy; I’m having some difficulty determining if Cyop & Kaf are one artist or two. In videos, the same artist is always displayed and on the C&K website the artist talks in the first person. But, a few sites describe the artist as a “duo” and there seem to be two distinct styles contributing to the art.

Perhaps both periodically work on projects independently and come together for their street art.

Regardless, Cyop & Kaf are Napoli locals who have worked in the Spanish Quarter of the city for years. All of the work below comes from that part of the city. You can download a map of their work in Napoli from their website.

As an artist(s), Cyop & Kaf has made the move into the Contemporary Art world via video and books.

The Rest of the Art

The rest of the art found around the city is random and from various locations. Some are from a trek up to Castle Saint Elmo and others from the streets around the catacombs.