I don’t know how to describe the intent of this trip. The idea started when La Niña was much younger and in a Spanish immersion school. We decided that when she was ready to experience and appreciate the totality of Spanish language and culture, we’d take 4-months and backpack through South America.

However, a lot changed in the last few years: La Niña is no longer in a Spanish immersion school, she is studying French. I no longer have a 4-month sabbatical, so we will have to break our adventures into smaller pieces.

Also (frankly), I’m getting older and no longer have the fortitude to tolerate the raw adventures of a budget-minded backpacker. I have the open, free spirit, adventurous mindset… but no longer have the physical ability to carry around a 100lb backpack during a search for an obscure hostel in the middle of the night while suffering from some physical ailment like travellers diarrhea, dysentery or typhoid.

So for this trip, La Niña will be getting her first taste of South American culture from within the safety net of guest houses and local connections. The objective is to experience the culture, practice the language, and find ways to open her eyes to different perspectives (not clouded by what we hear in the media). And yes, we’ll be going to museums and on tours to understand the political history and influences that created the current culture.

The destination is Colombia; Cartagena was recommended by my Colombian and Venezuelan friends who say it’s their favourite Colombian city.

Getting to Colombia from Montreal

The flight was veeeeery long with lots of mundane but memorable moments: three flights, being asked to pay 30USD for “free wifi” in Panama (no… we didn’t pay for it), and leaving Montreal at 5:30 am in -25C weather and arriving in Cartagena in +30C weather 16-hours later.

The haze covering Panama City was intense as we landed and experienced instant humidity and hot country smell when we walked off the plane.

After leaving Panama, we got to see a Colombian torrential rainstorm from above the clouds over Bogotá.

But none of these was the most memorable moment.

The most memorable moment was in Bogotá. We were trying to find our gate after getting lost through the very confusing connexiones part of the airport. Our Spanish is surprisingly fantastic in a pinch (mostly La Niña).

Being helpful but naive and not knowing what it was, we asked the man if he dropped it. He quickly pointed in the direction of the fast-running man (who was long gone) and denied all knowledge of “the tool.” Afterwards, no one would have anything to do with “the tool” so we moved to our gate, which was very close to where the object fell.

A few minutes later a sniffer dog arrived with its handler. The dog sat next to “the tool” and a whole lot of action ensued. There were many radio conversations and no one was allowed near the tool. 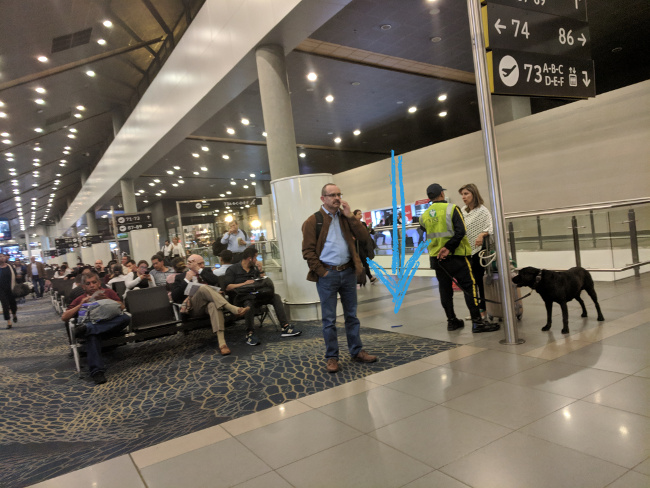 Then more staff showed up followed by a manager with a very demanding presence.

The dog did another “sniff” test and a staff member was asked to poke the mysterious item. They then removed “the tool” and the dog began to find other interesting bits close to where “the tool” originally fell. Shortly after “the removal,” the dog caught a scent and everyone walked away.

This was the end of our observations but I couldn’t help but wonder what sorts of things the dogs and their handlers experience in Bogotá’s airport. I still have no understanding of the purpose of “the tool.”

We boarded the flight shortly after everyone left and finally made it to Cartagena after 16-hours of flying.

0 comments on “The South American Culture Trip”Add yours →