You can find references to the Plaza de Los Coches clock tower in Cartagena from just about anywhere. And throughout our entire stay, we used this as a directional beacon whenever we were lost… because Cartagena and its meandering streets are a maze. It was planned this way… so invaders would get lost… and now tourists get lost.

Beyond being easy to recognize, this clock tower and the square it sits in is an epicentre for activity in Cartagena: most tours start from here, in the evening there are dancers who come and do a variety of local dances, there are sellers who work within the wall of the tower, and the horse carts you see meandering the city at night all start from this location. I was also warned that after 10 pm, this is where prostitution and drug trafficking happens.

Like many places in Cartagena, this public square has more than one name: it was first called Plaza del Juez (Judge’s Square) based on the first inhabitant of the colonial houses surrounding the square (Francisco de Santa Cruz).

In the late 1500s, the name changed to Plaza del Esclavo to call out the square’s purpose at that time: as the main slave market in Colombia. The name was then quickly changed to Plaza de Mercaderes because… not only could you purchase a slave in the square but you could also buy dulces from one of the sweets vendors who line the market.

These sweet vendors are still in Cartagena and many of the women and men you see along Dulces Alley are the descendants of the original sweet sellers. Their families have worked here for hundreds of years.

According to Armin Schwegler, a professor from the University of California in Irvine who studies African language influences on Colombian Spanish, 12-million slaves were brought to the Americas during the 400-years that the trade existed (20% of these people died on the journey); another name for the slave trade is the Maafa.

96% of these people were brought to Latin America, with this little square in Cartagena de las Indias being one of the main hubs. The remaining 4% of these people ended up in North America.

This is a terrible, terrible time in human history. It has left an indelible mark on South America that is still seen everywhere in Cartagena. I encourage you to watch Schwegler’s TEDTalk on the Palenqueras. He references this interactive map, put together by Slate Magazine’s Andrew Kahn; it shows the flow of slave ships from Africa to the Americas.

They are the descendants of Africans who came to Cartagena during the Maafa between 1600-1650 and escaped to settle in an area South of the city called San Basilio de Palenque. This is considered to be the first free slave town in the Americas (1691).

These women travel to Cartagena every day to sell fruit and dulces on the streets; they’ll also happily pose for photos for money. This is how their community survives.

One of the dulces you can only get from the Palenqueras is a peanut-based ball called las bolitas de maní. The Palenqueras make these balls from the peanuts grown by their husbands. They’re sweet and very much like the inside of a Reese’s peanut butter cup. 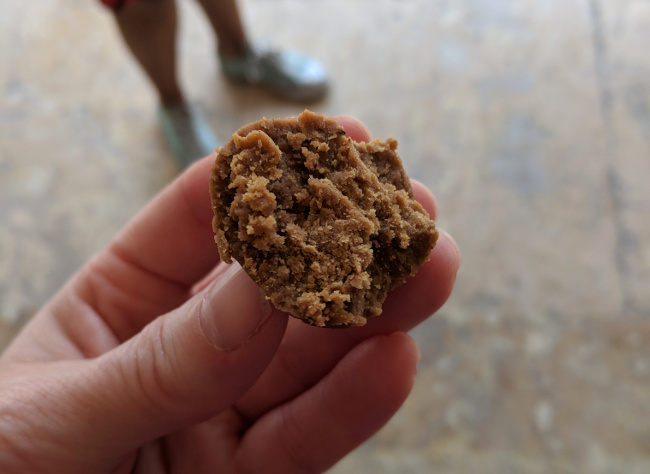 When African slaves were brought to Colombia, many of the women braided rice or seeds into their hair (or the hair of their children) to ensure that they’d have a food source when they arrived in the Americas (this article shows how).

Millet was one of the seeds braided into hair, which is still used to create one of the more popular cocadas made in the traditional Africa way by the Palenqueras: Alegría. We saw these for sale in the Mercado Bazurto.

Mapalé shows the African heritage of people in Cartagena; it is the most traditional and unchanged of the dances introduced to Colombia by African peoples.

Mapalé is the name of a fish and the dance is thought to be originally performed by Afro-Caribbean fishermen returning to the village after a long day of fishing. The men represent the flopping of the fish that have just arrived on the shore (out of water) and the women represent the power of the waves.

It’s terribly one-sided for me to only show what Afro-Caribbean culture is presented to tourists as they wander the streets of Cartagena. For a more holistic view of the poverty and racism that still exists in Colombia, check out Nicole Morgan’s post called An Unfiltered Look At Black Life In Colombia from her visit in 2018.