There is a preamble-post that sets the stage for pirate attacks on Cartagena by looking at the relationships of the people in Europe who are making the decisions for the colonies. For the back story, read this post.

Jean-François de La Rocque de Roberval was a French Huguenot and the first “pirate” to threaten Cartagena de Indias (arguably Pedro de Heredia was the first pirate for raiding aboriginal tombs in Cartagena). Roberval was a personal friend of King Francis I (the two fought together during the the Italian Wars) and a corsair for the French crown; in the Hispanic world he was known as Roberto Baal.

By 1543, Roberval was angry because his friend, Jacques Cartier, was successful in discovering and exploring the St. Lawerence and Maritime provinces in Canada; this was an expedition that Roberval was supposed to lead but he was delayed in Spain and arrived in North America a year too late.

Roberval had borrowed heavily to fund the Canadian expedition and was facing forfeiture of his lands in Spain. He partnered with fellow corsair, Pierre de Bidoux Sieur de Lartigue, to pirate in the Caribbean and find a source of revenue that would help him clear his debts.

They both knew Cartagena was an unprotected port and on one evening during celebrations in 1544, Roberval attacked the unarmed city and in return received 200k ducats if he promised to go away without doing any damage. This is the equivalent of 30-million dollars in today’s money. 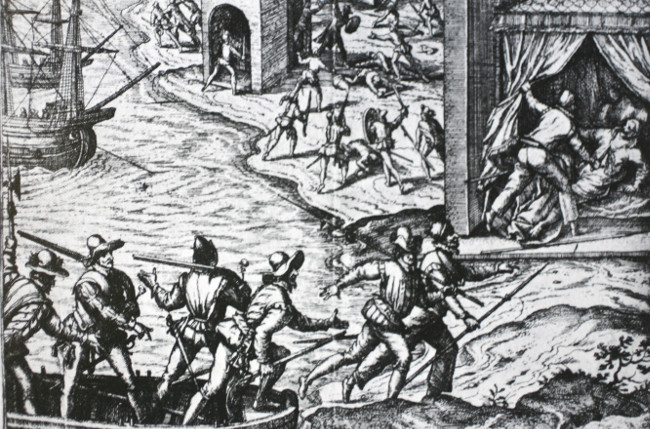 Francis I died in 1547. His beloved Huguenot pirate Roberval was assassinated in 1560 in Paris.

16-years later, Philip II of Spain and Henry II of France were bankrupt after decades of fighting against each other in the Italian Wars; their insolvency forced the two countries into the signing of the Treaty of Cateau-Cambrésis (1559), which forced peace in Europe.

The European territories in the New World were ignored in the treaty, which meant that the Spanish and French could continue to fight each other in the colonies. The treaty also ended a peace agreement between Spain and England, which led to attacks on Spanish galleons by English pirates.

Many of the French corsairs were Protestant Huguenots that were granted concessions and support from Catherine de Medici to continue piracy and resettlement in the Americas. And, why not… this solved two problems for France: piracy helped re-fill the empty royal coffers and resettlement took Protestants away from Europe.

By 1559, Spanish Conquistadors had conquered the Incan, Mayan, and Aztec Civilizations and had a fortune in plundered gold, silver, and emeralds waiting to go back to Spain. In Cartagena was a fortified imperial warehouse where the majority of this stolen loot was being stored.

This sets the stage for an attack by two French corsairs looking to capitalize on Spanish wealth: Martin Côté and Jean de Beautemps. Their attack on Cartagena was very well orchestrated when they arrived in seven ships with more than a thousand men.

The city initially fought back but was facing many deaths and a gutting of Cartagena; as such, the city’s leaders negotiated the ransom and managed to save Cartagena from complete destruction.

In 1558, when Elizabeth ascended to the throne, she became the head of what was considered a poor and insignificant country to the rest of Europe.

The only means in which she had to build wealth was by stealing it from the Spanish; and, she had a secret Spanish-hating weapon: Sir Francis Drake.

Drake was a master at sea born guerrilla warfare (if not “the” master) and immediately does what no other sailer has been successful at doing: he sails around the Strait of Magellan and attacks the Spanish towns along the West coast of South America. He quickly becomes known as El Draque to the people of South America.

Drake’s piracy catches the attention of Philip II of Spain (who also happens to be a good friend of Elizabeth’s); and, with each new attack on a city or ship, Drake pulls in hundreds of thousands of pieces of gold. When he finally returns to England, the Queen is able to pay off the country’s entire national debt. And, rather than arresting him for piracy (which Philip II asked her to do), Elizabeth knights Drake (1581). 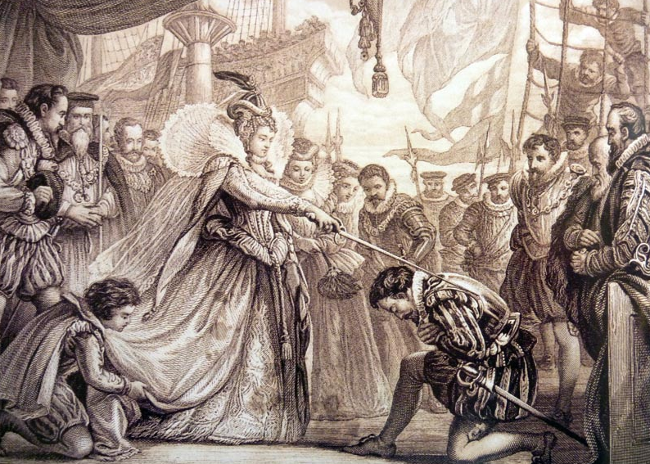 Pissed that his good friend and half sister-in-law betrayed him, Philip unofficially declares war on England… and the Anglo-Spanish War begins in 1585.

Drake’s attacks on the Spanish colonies are only one of the factors leading to war. Another is the reinstatement of the Act of Supremacy in 1559 by Elizabeth I. This act restores royal supremacy over the church in England and sealed England’s fate as a Protestant nation, thus undoing what Mary I (the wife of Philip II) had achieved during her reign (this post). This added fuel to the Protestant and Catholic violence in both Europe and the Americas.

The pièce de résistance for the whole affair was Elizabeth’s final instructions to Drake: attack the Spanish and bring home gold. He knows were to go: Cartagena and in 1586 he occupies the city. 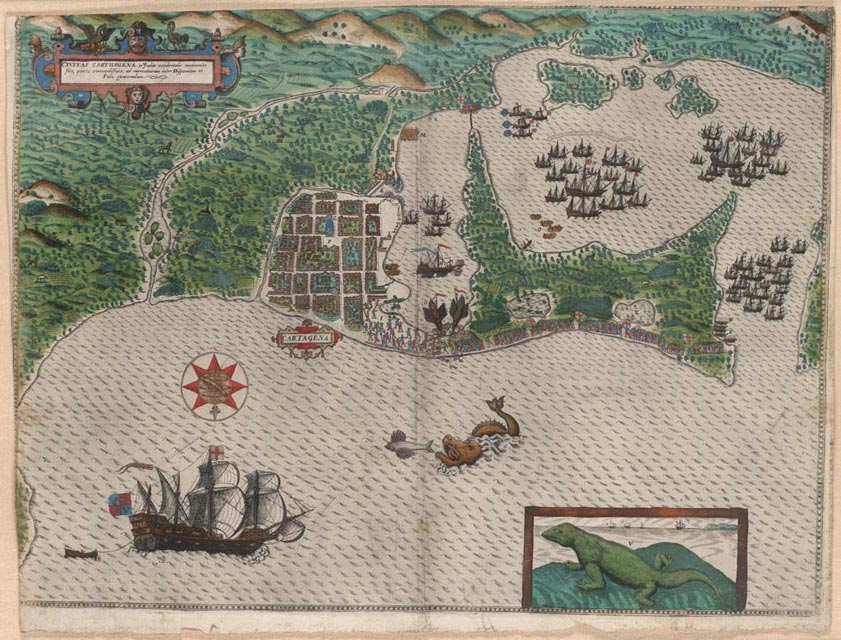 This drawing from Giovanni Battista Boazio illustrates the attack on Cartagena. You have “El Draque” or the Drake catching a fish (the prize) while the Lizard (representing Royalty) is watching from a distance. It’s said that Philip II watched helplessly from afar as Drake stole a fortune in the Spanish colonies.

This was Drake’s second raid on Cartagena so he knew exactly where to go and what to expect. He arrived in the dead of night with a fleet of 25-ships and a well trained English army… and they had control of the city in less than 24-hours.

Wait… there’s more. I had to break up one post into three because it was so unwieldy. Up next: Old buildings in Cartagena and the wall that makes the city famous.