The decorations on many of the doors in old Cartagena tell a story of status; much like the crow-stepped gables you see on buildings in Belgium.

The size of the door, the number of knobs you find on the door, and the type of knocker indicate both the status of the original homeowner (historical) and their profession. Cartageneros are very proud of the aldabas that decorate the doors in the city.

The practice of showing status on doors originates in Ancient Greece. The popularity spread to the rest of Europe with the Romans and then to the colonies when the Spanish arrived in the 1500s.

Traditionally, one of the most enduring themes for knockers throughout the world is that of a lion’s head. The lion is seen as the king of beasts and a lion’s head is a symbol for bravery, strength, and valour.

In Cartagena, a lion head on a door is found at the home of a person who was in the military or was a protector of the city.

A house with a lizard door knocker in Cartagena means that the owners were related to or connected to royalty. This is certainly apropos because royalty was often seen as God’s spiritual representative on earth.

In a city like Cartagena, with close ties to the ocean, folk stories about the leviathan, mermaids, sea serpents, and giant octopi are prevalent. The ocean itself is a symbol of freedom and mobility.

Houses with sea creatures on the door mean that the former occupants were linked to a merchant or seafaring profession.

We saw a number of aldabas that did not fit into the typical mould of the three knocker types listed above. I don’t believe there are any “reglas” about what you can and cannot put on the door to your house so the type of knocker that appears is likely chosen based on the whim of the current owner (there does seem to be an abnormally large number of royal lizards in the city… more than you would expect).

Of the atypical ones we saw, some looked like family crests, religious symbols (prayer hands or the hand of Fatima), aboriginal imagery, faces, and masonic symbols (not all pictured).

The bigger, more ornate, and more elaborate on the door, the more impressive your family’s heritage and social positioning.

The number of knobs on the door indicates importance; the more you had, the more power you hold in the community.

At some of the houses, you’ll find inner and outer doors; this was often for practical reasons. Opening the little door kept the heat out and requires little to no effort to open.

When the Lord, Lady, or important guest entered, the bigger door was opened and people entered, sometimes on horses; the doors needed to be big enough for people to enter on horseback.

One final note, if you were accused of a crime or of witchcraft during the Inquisition, you were not allowed to enter through the front door at the Palacio de la Inquisición.

Instead, you were brought to the side of the building on horseback and forced to enter through a small window (it’s up high because you would have been on a horse or in a cart). 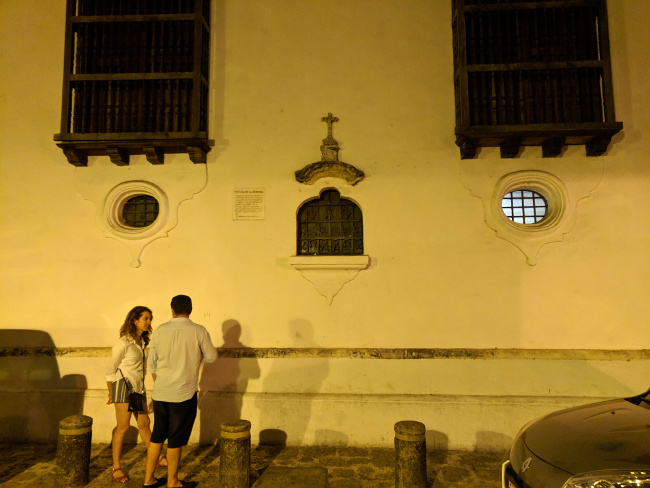