One of the smartest things we did before arriving in Cartagena was to find a local guide to take us to the places that we were hesitant to visit.

The Mercado de Bazurto is a place we really wanted to go (because markets are a huge part of local culture… and… fruit!!), but Bazurto is like nothing I’ve ever seen before (even after decades of meandering markets around the world and living in India).

It’s a dirty, smelly, muddy maze, where crime is widespread, and one wrong turn could take you to an elicit area where locals don’t dare to venture (our guide had a story about this). It’s probably for these reasons that we saw no other tourists. The reviews online are written by a mixture of people who are either horrified or impressed by the authentic, raw experience.

And, eating there is certainly not for the faint of heart… or weak of stomach.

As you can see, it was very very empty on the day we visited: on a Sunday, which is strange because Sundays are busy market days in Cartagena like they are everywhere else in the world! 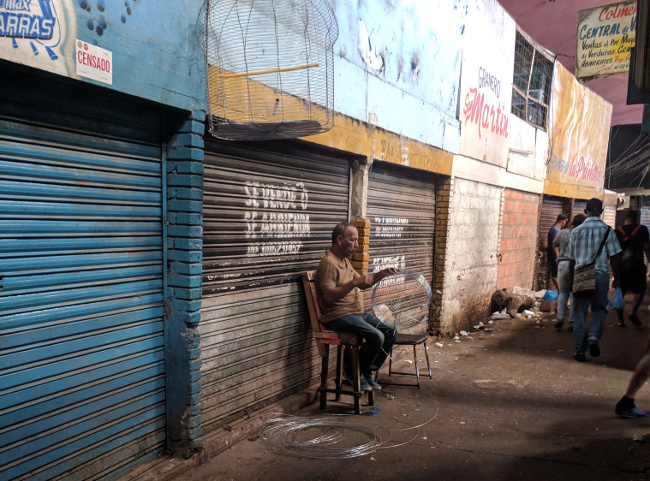 You may have noticed the birdcage in the upper part of the image above.

It’s common practice for sellers in the market to keep a bird at their stall for good luck. Perhaps the luck sought is keeping away police because la policía will periodically raid the market to remove illegal sellers; however, I think this is probably more about controlling market spread and less about shutting down unlicensed sellers.

Regardless, this unlicensed market is where 90% of the sellers work. They arrive at some ungodly hour in the morning (like 4 am) to start preparing for the day. This is because all the food in the market is prepared “fresh” to make up for the lack of refrigeration.

From what we could see, there was very little time between when the farmers/fishermen arrived, the sellers prepared the food, and the buyer purchased or ate (in the case of the open kitchens).

Throughout our travels, our favourite market section is usually the fishmongers; there seems to be an unwritten rule that people who work with fish do so with a tremendous amount of joy. They throw fish around, sing songs, and are just plain boisterous.

The fish sellers in Bazurto are no exception. We took a photo of the man below and our guide gave him a few pesos. He gleefully yelled out, tengo pesos para una foto. Everyone laughed. 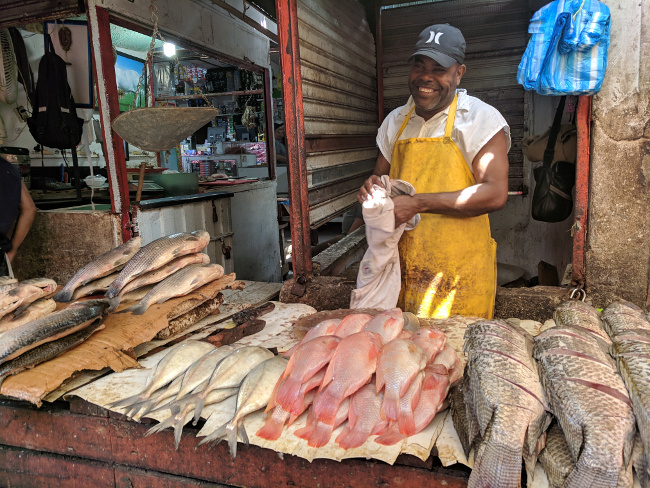 We didn’t get to sample much from the fruit stands. The market was overstuffed with people in this section, which made it nearly impossible to spend time sampling different types of fruit (like in Bogota).

The only one we managed to snag on the way through was a granadilla, which locals will jokingly crack open using their head. The vegetables were pretty standard (potatoes, onions, tomatoes, cabbage, ginger, etc).

The meat market, however, is a much more unsettling and raw experience (pardon the pun). Ironically, the area we meandered through was in the legal market, but they were selling illegal meat like armadillo and turtle.

These are popular during lent because many Catholics in Colombia will give up meat during lent but armadillos and turtles are not considered meat in Colombia so they are seen as an alternative to beef and pork.

Enjoying a Sunday meal with locals

A typical Sunday for people in Cartagena is to wake up early, go to Catholic mass, head to the market to shop and finish it all off with a meal at a corriente with your family and friends.

Lunch is usually fried fish and yucca served on butcher paper, which is what we enjoyed with a pitcher of aguapanella (panela water… cane sugar water).

As you are eating, people who cannot afford food hover nearby to see if there will be any leftover food. When you step away, they descend on the food pretty quickly.

What surprised me is that when we left, a man who’d been waiting didn’t go for the yucca and fish, he went for the agua-Panella and dumped it into a plastic bag before hurrying away. We found out later that agua-Panella is thought to have healing properties in Colombia.

One local delicacy that people go completely crazy for is baby shark. Our guide took us for a “special” meal in a small alcove behind all the women cooking food.

We felt very conflicted eating baby shark… but I will say: it’s very tasty. The only shark in the photos below is the orange food on the plate in the centre photo.

One final tip about the market if you plan to visit: think carefully about the clothing and shoes you wear.

Definitely wear closed-toe shoes because at times you don’t know what you are stepping in. Also, don’t wear anything you are really attached to because the smell of the market lingers in your clothing and shoes even after you wash them.

0 comments on “That maze called Bazurto Market”Add yours →