Getsemaní used to be really dangerous. Drugs and prostitution happened openly on the streets and locals were reluctant to be outside at night; security bars adorn all the windows of once crumbling buildings. Historically, this was a marginalized community outside the walls of the rich, affluent fortified city.

But, like many other culturally rich but monetarily poor communities (e.g. the Mission in San Francisco and Harlem in New York) this community has transformed from an authentic, impoverished, tightly knit community that is mired in crime to one fighting a new invader: gentrification.

Big chain hotels are all vying for space in Getsemaní to accommodate a growing high-end, boutique tourist economy; people are being pressured to sell their 200-year old homes and leave the only community they’ve ever known. This pushes out a culturally rich spirit that draws artists and bohemian free spirits who love to explore this type of neighbourhood.

We’re lucky to have experienced Getsemaní in a semi-transformed but mostly authentic state. We’re blessed to have had the opportunity to meander the streets and talk openly to the welcoming people who live in the community.

While here we heard stories and witnessed the street art that documents the community history, their struggles, and the people that make up the communal tapestry.

Many of the stories revolve around gentrification and how locals are fighting for the right to stay in their homes.

Some of the stories involve folk tales like that of Maria Mulata.

In Getsemaní, people and animals once lived in harmony. One such creature was a beautiful, multi-coloured bird named Maria Mulata who had feathers that included all the colours of the rainbow.

One day Maria Mulata saved the good people of Getsemaní during a fire by carrying locals to safety in her beak. However, after repeated trips through the smoke and ash, the bird’s colourful plumage turned black; afterwards, all of her children were born with black feathers. It’s only one a really bright day will you see some of the original colours in Maria’s descendants. 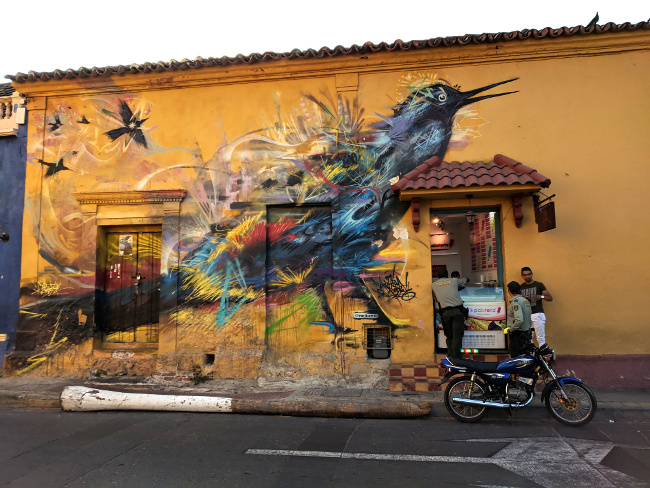 A mural illustrating this story is painted on one of the buildings facing Trinidad Square. In the evenings, people from the community meet here to socialize, sing songs, play music, and dance; anyone is welcome to attend and it is a great opportunity to newcomers to meet the people of Getsemaní.

0 comments on “The wonderful street art of Getsemaní”Add yours →