I started writing this post a few days ago; and then, it didn’t seem like the flooding would be as bad as what we experienced in 2017. However, today I deleted everything I wrote before because… the flooding is bad and is getting worse.

Soldiers arrived; we heard helicopters before we saw police vehicles and trucks towing massive pumping machinery and hoses. Earlier in the week, while walking the dogs, we overheard one of the officials say that the water was rising at a rate of 1cm per hour. That’s insane and most news reports say that when the water comes, it will be fast and it will be unstoppable. Water has already broken through the dikes in other parts of Québec; everyone is on edge.

The flooding was supposed to peak on Wednesday… and then it was Thursday… and now officials have no idea when the water will peak. It’s still rising.

In 2017, people had to drive around to find sandbags. And, because there was no traffic control, it was a struggle to keep gawkers from driving fast through the flood zone and causing waves that overtook the small, pitiful protection from the rising water. 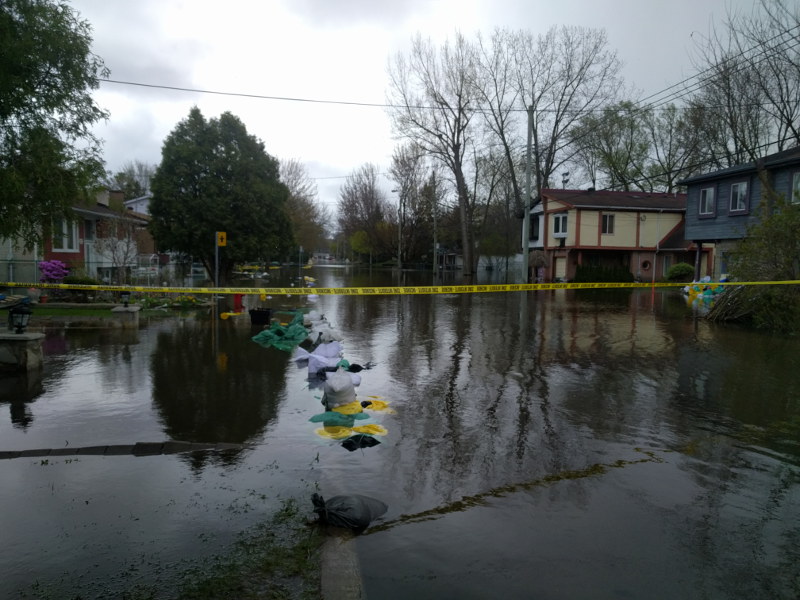 In 2017, Facebook was used to rally together people to help fill the bags… and then feed the volunteers who were working… the community made the food to feed volunteers.

But, it was too little too late and in a short period of time, most houses along the flood zone were half underwater and people were evacuated. The community pool and centre were heavily damaged, the running track underwater, and the soccer field was taken over by aquatic wildlife. Local schools were cancelled because no one could get there safely; La Niña‘s school was turned into a Red Cross response centre.

Then there was the clean-up, the sandbags, the goose poop, the dead fish in the streets, and sadly, people’s washed away belongings that swept away with the river. 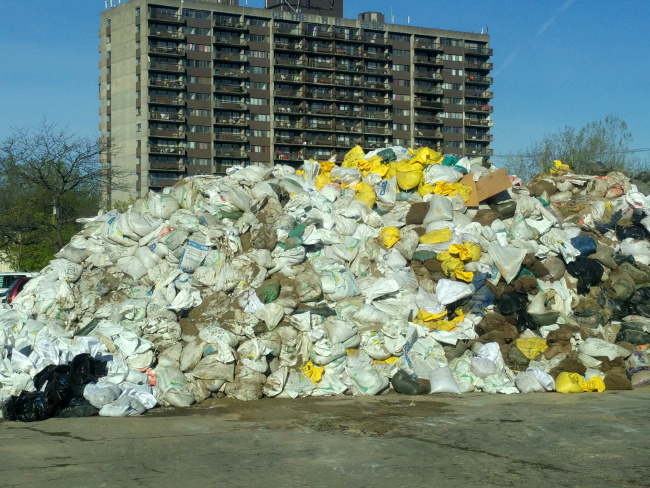 This year there was no-nonsense. Big trucks came through the community overnight and people awoke to find crates of sandbags and plastic tarps on the street or their front lawn. 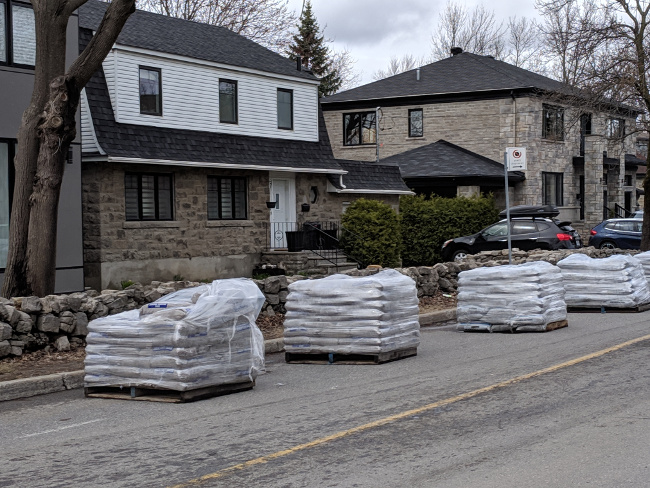 There were so many bags that people are now able to build two layers of trenches in front of their house (military style) and the entire community was out to help build.

Some people along the river held “beer & bag barbecues” and invited all their friends and family out to help with building sand/plastic walls.

Along Rive Boisee, the military set-up gigantic rubber barriers that are filled with water from the river. Rather ingenious, this harnesses the power of the flood to fight itself!

Already it is keeping the water out of the community pool, parks, and away from the people who live along one of the worst flooded areas from 2017.

However, this doesn’t stop the water, it simply diverts it somewhere else. And, even after all these efforts, there are still properties and businesses underwater.

We went to help with the sandbagging. However, the city has so many people on site that were turned away.

One of our neighbours is hauling bags to the flood sites and said that when he shows up with sandbags no one wants them because there are so many bags already.

There is a literal army of people with big machines taking care of things this year, which is the exact opposite of 2017.

This year there are pumping stations; these are elaborate and manned by city workers. Access to the area is controlled by police, which has kept some of the gawkers and cars away from the flood zone.

But not everyone. There are still people going around the barriers and blasting through the water in their cars, which creates waves that affect the sand barriers.

There are still people who stop to take pictures or who get confused when they see the water and get in the way of city vehicles who are trying to move materials around quickly.

There is an increase in traffic along the only streets that locals can use to get in and out. When these people park along Rive Boisee, it takes space away from those who had to evacuate their vehicles from the effected apartments and condos along the river.

Here’s a video of some of the flood scenes… taken over the course of the week… so you don’t have to come to see for yourself.