I’m sure you all remember Beetlejuice. The 80s classic starring a very young Alec Baldwin and Geena Davis. They’re living an idyllic life in small-town America until they are suddenly killed by a wayward dog, a red coloured covered bridge, and a fast-flowing river.

Shortly after their demise, they return as ghosts to haunt the new owners of their house (one of whom is a teenage Winona Ryder). The outside scenes of the movie were filmed in East Corinth, Vermont (indoor scenes were done in a studio).

We drove around the small town and surrounding hillside to see if we could recognize scenes from the movies. We found a lot of mud and potholes.

It’s not hard to find familiar sights because not much has changed for the town since the movie was filmed 30-years ago. The buildings and scenes are undoubtedly recognizable. 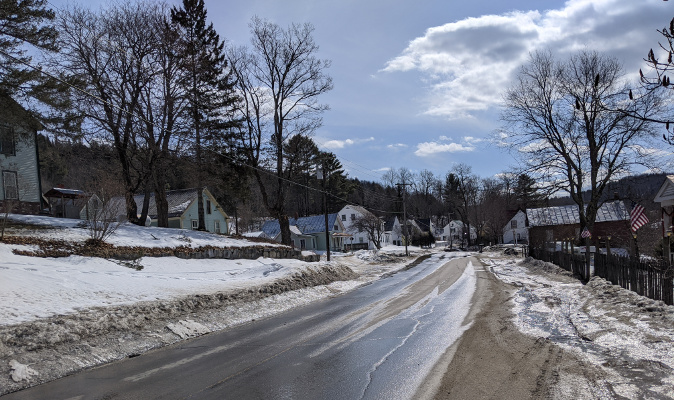 The only difference between reality and the movie is the absence of the family house.

That’s because the house was never real. It was a blow-up house that crews erected as needed for outdoor shots. The house was fabricated but I feel like it took design elements from the one pictured in the gallery below.

I took the photos while standing on Chicken Farm Road by the bridge. The actual bridge is not covered. The red cover was explicitly added for the movie and later moved to a local ski hill.