Going to the Altas Coal Mine brought back many stories from my childhood in Nova Scotia. The mines were damp and warm, my Grandmother would say, in the harsh of winter my father loved going into to the mine because that’s where it was warm. Once you felt the pull, you always went back to the mines. I think the men felt a connection to the earth.

Lamps and lighting for miners were often a hotly debated topic that involved safety, light quality and reliability. The last thing a miner wants is to be in the depths of the pit and have his light go out (or worse, have the flame ignite an explosion).

For decades, carbide lamps were the lamp of choice because the light was very bright and clear. This type of lamp produces and burns acetylene, which is created when you drop a chunk of calcium carbide into water. I remember being told as a child that carbide lamps were dangerous in Nova Scotia mines where firedamp often ignited with a flame and caused an explosion.

Below is a “safer” battery pack used in an “electric headlamp with battery pack combo” that became standard mining equipment after the Second World War. 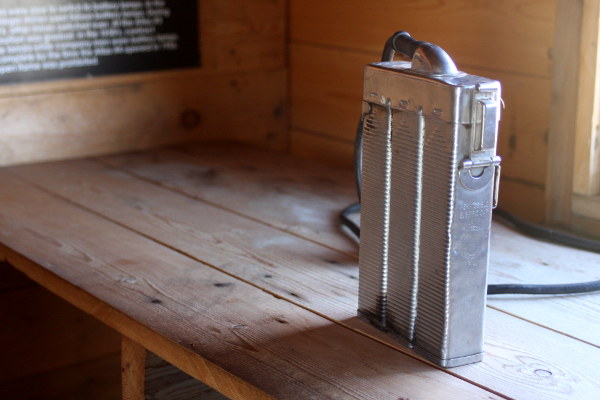 From a plaque in the Atlas Mine Lamp House:

When Thomas Edison developed battery-powered cap lamps in 1913, it seemed the solution to safe underground lighting had arrived. However, they were slow to catch on in many mining regions, including the Drumheller valley. Problems that plagued early battery lamps included excessive weight, acid or alkaline burns, and light that faded towards the end of the shift. In addition, they cost more than open flame lamps and required an entire infrastructure to maintain them, with a lap house, recharging racks and a lamp man.

Mines with serious gas problems were the first to adopt the new lamps. In these mines, each miner was assigned a lamp with his number on it. At the beginning of his shift, he picked up his lamp at the lamphouse. Fully charged, he could expect 10 hours of light to work by. At the end of his shift, he returned his lamp to the lamp man, who maintained and recharged it.

The smaller black roof building in the photo below is the lamp house (often called a lamp cabin) from the Atlas Mine. It was here that the lamp man and batteries resided. 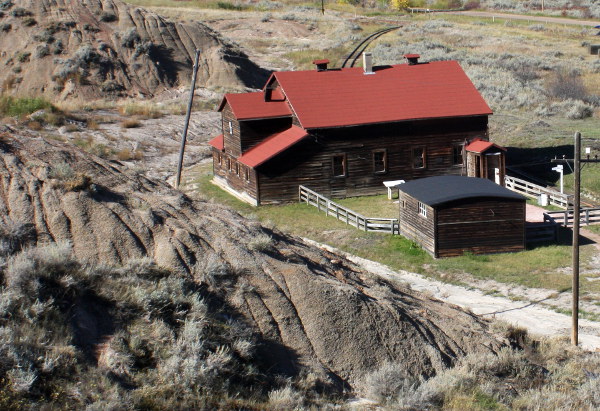 For years, the staff at the Atlas Mine were mystified about what role the little cabin played in the lives of the miners. From a plaque:

Big mysteries sometimes come in small packages. What was this little “cartop shed” used for? Atlas museum staff puzzled over this question for years. Its contents and location suggested use as a lamp house, but no one who worked here remembered it that way. Atlas #3 miners remembered bringing their own carbide lamps to work, and not using a lamp house. Atlas #4 miners recalled picking up their battery lamps at a lamp house by the shaft, some distance from here.

In 2003, Museums Alberta and AltaGas Utilities supported research and display development for this intriguing building. Staff and volunteers talked to miners, studied archival and aerial photographs, cataloged objects inside the building, and studied the building fabric itself.

The conclusion? Evidence suggests this shed was a lamp house at the Murray Mine, then moved to the Atlas in the 1960s. After that, it was used for storage. There is more to learn, and research continues. In the meantime, this little building provides an excellent setting to discuss mine lamps, and how they lit in the dark underground

0 comments on “Lamps for Coal Miners”Add yours →