It’s taken me a while to grasp the news that my Nana passed away; and, I suspect it will take even longer to fully comprehend that she’s no longer occupying space somewhere on Earth. Perhaps that’s the hardest part.

It’s the little moments that get me, like standing on a packed bus and remembering the first time I rode the bus in Vancouver. It was my grandmother who showed me how to ride the bus, how to put your coins into the receptacle, when to sit and when to stand – and who not to talk to. See – my grandmother took the Hastings Street bus every day. It’s not something I really thought about until today — my little grandmother from small-town Nova Scotia, taking the Hastings Street bus from Vancouver’s Lower East Side.

She was tough, in a time when women weren’t supposed to be tough. But my grandmother survived the mines in Nova Scotia, watched her brothers die one by one – and eventually her father. And, when she became a war bride, she headed back to England to endure the aftermath of the blitz in a cold country where the people were broken and unfriendly because of the war.

In the years that followed she travelled the globe as a military wife. She wanted to work and took a job at a local factory like so many women in the 40s – but was booted out when she was diagnosed as epileptic and subsequently was not allowed to join the workforce. I can’t imagine how hard this must have been for a woman who was so strong-willed, who had a lot of pride and who wanted to work but was not able to because of societal times and beliefs.

The thing I remember most about my Nana was her hands. My grandmother did a lot with her hands – gardening, baking, cooking, nurturing, painting, crafts, etc. She is one of the only people I know who could cook anything from scratch and could rework any terrain into a jungle because her thumb was so green. She rarely followed a recipe and those that she did she wrote down. That was one of two things I asked for: all of her handwritten recipes.

The other thing I asked for has a long story attached that started in the 70s. In the summer of 1974, my grandparents went camping on Vancouver Island. They had a little VW camper van that saw many a journey through Washington and British Columbia. While at one campground, Nana was washing her hands in one of the public bathrooms when another woman grabbed the wedding ring Nana had placed on the basin and quickly ran out of the building.

Now, Nana grew up in a mining community and if she’d caught the woman she would have beaten her into a pulp; however, the woman got away and my grandmother was heartbroken that her little war bride wedding ring was gone forever. Shortly after Papa bought her a new ring – one that she chose. The centre setting holds an amethyst that represents Nova Scotia and has two set diamonds on either side that represent Nana and Papa. I remember this ring from a young age. I remember seeing her wear it when she taught us how to play cards, when we picked apples together, while we were camping in their little camper van, and I remember her taking it off when she baked us cookies and gardened. It reminds me more of her than anything else and it now sits on one of my fingers.

There are lots of other little memories that pop up; like when La Niña plays with Playdough I remember being little and my grandmother mistakenly eating a piece of blue playdough and then making such a big deal out of it that my brother and I fell over we were laughing so hard. I remember her coming for visits and bringing hundreds of boxes of raisins in her suitcase (to this day I still hate raisins); I remember going for walks in the park and spending sunny afternoons at Stanley Park; I remember being little and her coming for a visit with a little brush and mirror set – and her meticulously brushing my hair with the little gold plated brush while singing songs. She loved to sing and sang all the songs to me that I now sing to La Niña. It hasn’t always been easy, however. I inherited Nana’s strong will/pride and the fights we had were monumental.

My Nana was sick for as long as La Niña has been alive so La Niña never really got to know her; it’s a shame that Nana wasn’t able to practice her magical way with kids with her great-granddaughter. For La Niña we’ve been answering all kinds of questions about “Grandma’s momma who died in her sleep.” Like: what does it feel like to die, what happens when you die, what does a dead person look like, why did she die, and what do angels look like. People struggle with these questions their entire lives, so who am I to know answers. Luckily, La Niña is content to look at photograph after photograph of the woman who lived life with such passion.

One of the things my grandfather said while we visited for the private funeral was: “Rose was sick with the most terrible disease (Alzheimer’s) and I wouldn’t wish it on my worst enemy.” And yet, it was his best friend who was afflicted. I’m glad she’s finally free of her hell.

Here are some pictures:

Riding her bike. She never learned how to drive a car, which I always wondered about. She walked everywhere or took the bus. 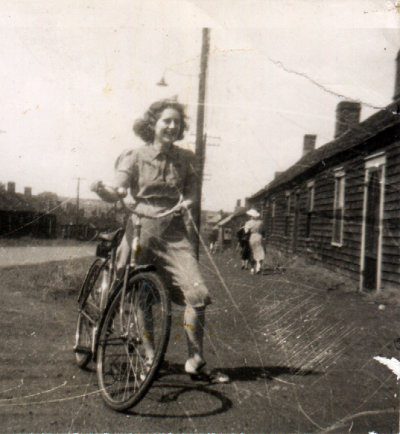 With her brother Willard who died in the Mines. 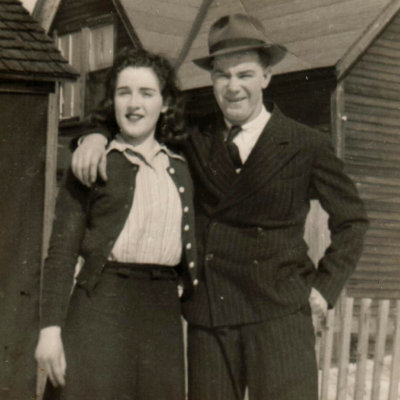 With her father who died of black lung. 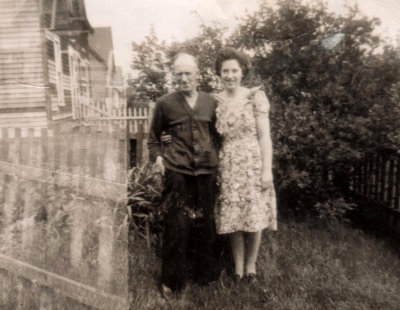 Wedding day. Her beloved sister Mae is on the right. 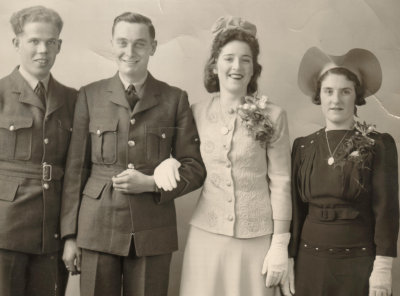 Nana lived in England, Germany, France, Montreal, Nova Scotia, B.C., Manitoba and travelled all around the world. Here she is when she lived in Montreal. 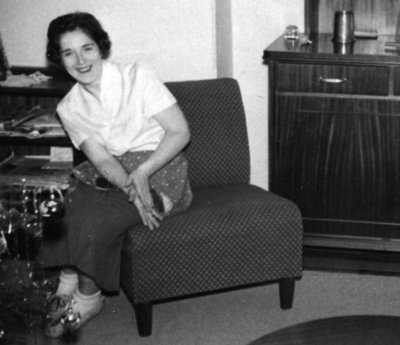