One of the things that slow you down the most in the winter is the switch from slicks to knobbies. When the weather is nice and there’s not a lot of crap on the road like cookie dough snow and an ankle-deep salt/sand mixture, I have slicks on my bike. For those who don’t know what this means, this is a slick tread: 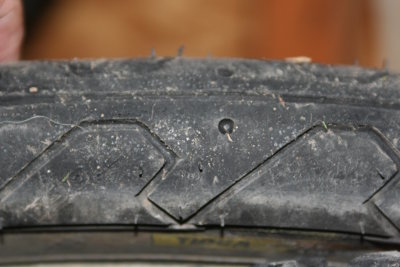 Slicks are pretty much bald tires. Their purpose is to provide less resistance so you can go faster. Some say that if you put slicks on a mountain bike and increase your psi to the max allowed for your tire you can actually go as fast as a road bike. I would agree that you go faster but disagree that it is as fast as a road bike. There are too many factors involved in being fast. However, on the same bike with the same rider, I do know that there is a huge difference between slicks and knobbies when it comes to speed.

This is a knobby tread: 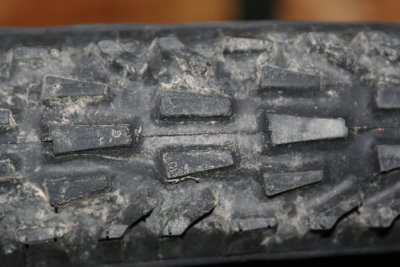 Knobbies are designed to help keep you from wiping out on terrain that slicks do poorly on: sand, dirt, gravel, and snow. They provide a lot of resistance and are excellent for off-roading. However, in creating resistance you are slowing yourself down. Knobbies are not to be confused with studs. Studs are tires with little metal studs that help on ice; knobbies don’t do well on ice.

When I put slicks on my tires in November it felt like I was suddenly out of shape — there was so much resistance that it slowed my ride down to a crawl; so much so that I stopped riding because it didn’t make sense for me to continue be constantly be late and risk freeze body parts when it was cold. I also made the mistake of putting a pair of dP’s aggressive off-roading high-performance knobbies on. These are great for hardcore mountain rides but not commuting.

However, I’ve missed my daily bike rides and this weekend I went out and bought hybrid tires that incorporate a combination of slick and knobby. 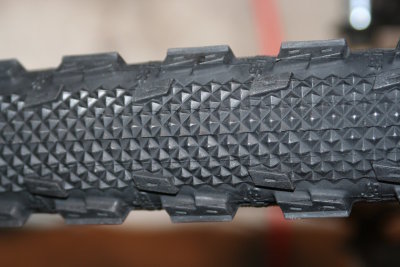 These have a knobby edge and a slick-ish middle. The thought behind the design is that most people wipe out when they turn or skid sideways; so, with this tire when you turn you are on the knobby edge — but on the straightaway, you are using a faster slick. The first time I rode with these tires I could feel them grip every time I started to skid — and was able to maintain my normal biking speed. There is one annoying thing about these tires, however: they throw a lot of little rocks — so if you use these tires wear some sort of eye protection.

Below is La Niña riding her new bike. I promised her I would buy her a bike when she turned three. So, we went to Bow Cycle yesterday and had her fitted to her “Little Mermaid” (which is really fricken cool bike). We went yesterday because next weekend (when her birthday actually is) we will be in B.C. at a non-funeral.

She’s still working on the logistics of biking. Right now she’s got knobbies on her bike. 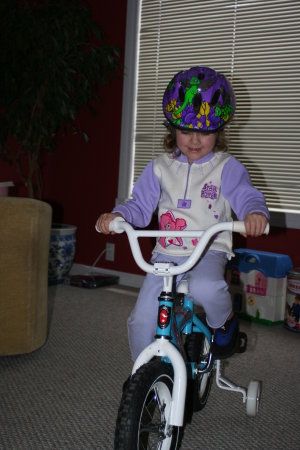 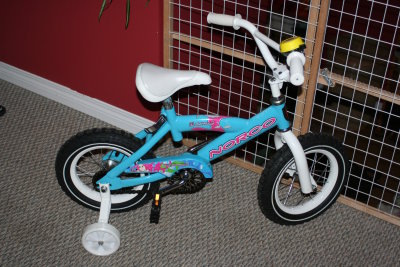 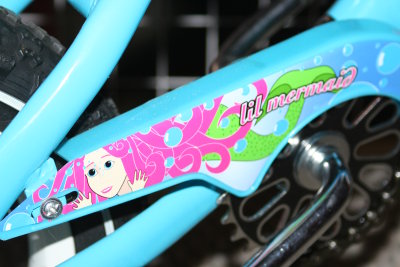 0 comments on “Bikes (and Parts) Everywhere”Add yours →