There are so many interesting things to do in Calgary and we never get a chance to do them because our days are a tightly weaved matrix of “must dos” and “need to dos” that never seem to ever happen.

This year we made an effort to take in a Christmas breakfast or two around town, one of which was the Heritage Park breakfast. The food was so good that La Niña managed to fit an adult portioned amount of food into her tiny little body; much to our chagrin because we’d just finished telling the staff that she was two years old and should eat for free because she wouldn’t eat much (kids under 3 years old eat for free but because La Niña is so tall I’m sure the staff thought she was older than 4). 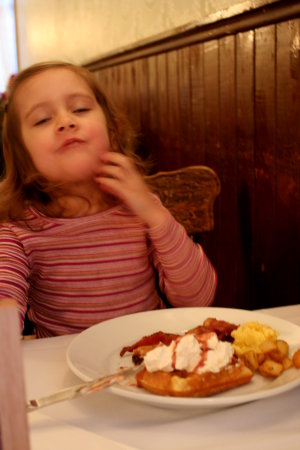 A little note for anyone thinking of partaking in the Heritage Park breakfast: book reservations. It’s pretty much a packed house from the start at 9am until 3pm when it ends. Without a reservation there is a slim chance of getting in. The good news is this year they’ve opened two locations for the breakfast: the Wainwright Hotel and Gunn’s Dairy Barn (down the hill from the hotel).

Once breakfast was over we headed out for a horse and wagon ride. 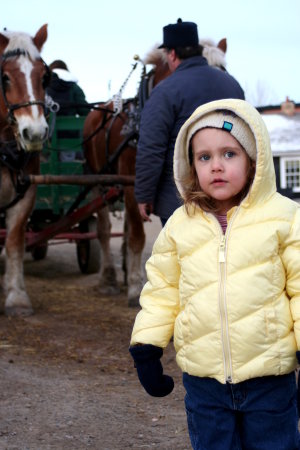 This was a huge hit with La Niña who is going through a horse phase; her smile could have lit up an entire field of Christmas trees. The ride is so popular after the breakfast that they have two wagons running. We were on the “brown horsie” wagon.

After we managed to drag La Niña away from her new equine friends we checked out the Christmas Market. La Niña spends an inordinate amount of time playing house with things like candles and spoons (who become little people in her mind). So, as we worked our way through the market she made all the toys and figurines talk to one another and act out little scenarios. I’m hoping Santa brings her a doll house with lots of little people (then I can have my candles back). 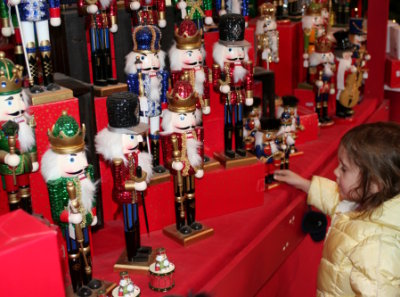 Speaking of Santa… we saw Santa but decided to avoid him because he was far too skinny and pimply to be the real Mr. Claus. When he yelled out “Merry Christmas Everyone,” I think his voice actually squeaked and then cracked. We want to preserve the memory she has of the real Santa from Santa’s Playland and rushed by this imposter while describing him as “a fake Santa wearing clothes that are way too big.” 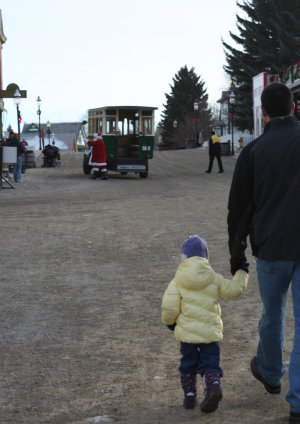 The next stop was the Smoking Parlour (no smoking allowed) where a massive train exhibit is always running. La Niña managed to find Thomas, Annie and Clarabel pretty quickly. Here’s another tip for the parents of Thomas fans: if you buy a Heritage Park Season Pass before January 4 2008, you get first dibs on A Day Out with Thomas tickets — at a discount rate. I’m happy that this year there’ll be no last minute searching on Ebay, Craig’s List or waiting in line at 6am in hopes of getting tickets. Tickets go on sale for the general public in late January and if it’s anything like last year, they’ll be sold out soon after. 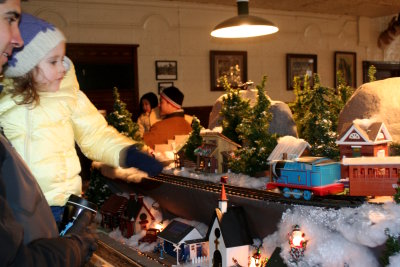 Our final destination was the hay fort. Not much is left of the fort part, but the hay part was a blast. It was such a success that we’re still picking hay out of La Niña‘s jacket, mittens and hat. 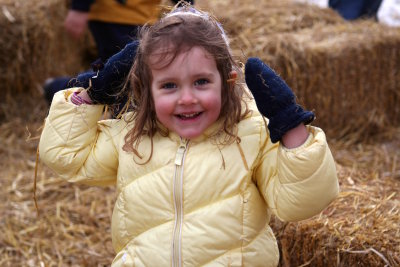 0 comments on “Heritage Breakfast”Add yours →