The food in Belgium is amazing; but, the thing that really stands out is the culture and mindset that sits behind it. I was given one insight that has since changed my entire perspective around food. In NA, we tend to guilt people into eating right: it’s better for the environment, it’s sustainable, it’s healthier for you, you aren’t killing animals, eating wrong can cause diseases, etc.

In Belgium, the belief is that if you want people to eat healthily and sustainably then make the food options that fall into this realm really really tasty and affordable to everyone.

We immediately discovered that vegan, gluten-free, vegetarian, and variations of this were what was available cheaply in quick food outlets. And, if you wanted to venture into fried dishes with meat, you have to pay a premium. This flies in the face of the NA concept of making people pay more for organic, healthy food. And, it makes sense because it costs less to make a good salad. Essentially, you aren’t paying to “be healthy.”

Below is a Middle Eastern salad we got at a quick kiosk at a train station! Served with water. For this, an espresso, a blended raspberry juice, and a sweetie, we paid less than 15 euros. 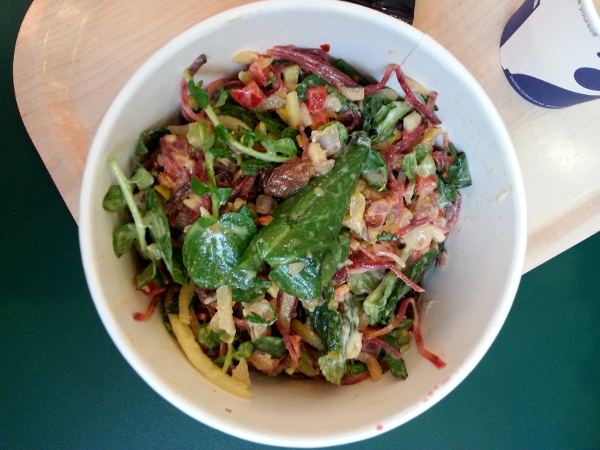 Also, most Belgians don’t really eat waffles smothered in fruit… or frites with their food. The tourists do. And, both taste good… finding a waffle vendor was the way kidlet started every day. I just kicked myself awake with espresso, which was strangely satisfying. 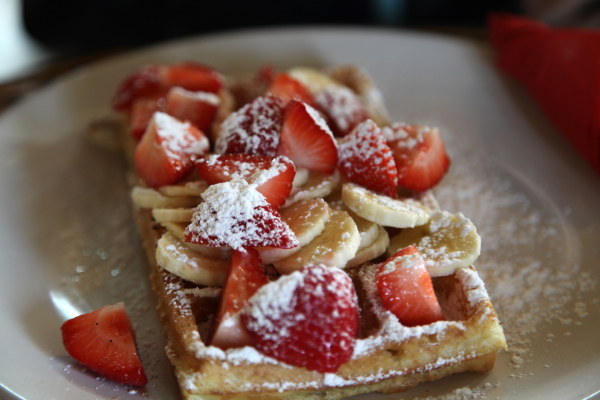 Before I dive into the rest of this piece, I want to point out that we enjoyed Ghent. It’s a lovely little medieval town. I’d recommend visiting Ghent to anyone. It allowed us to relax, explore, shop (Belgium has the best shoes!), and figure out the food thing before going back to Paris.

But… it wasn’t entirely chocolate, candy noses, and roses. And, because I’m in a feedback-giving-mood I thought I’d deliver a bit of “feedback” on Ghent.

One of the people I talked to while in Ghent mentioned that she was perplexed as to why Brugge drew significantly more tourists than Ghent every year. It was a goal of the city to become equal with or surpass Brugge in the realm of tourist numbers.

I didn’t want to say anything at that point (because we were having such a nice conversation), but Ghent is actually not a tourist-friendly place, and it’s certainly not designed for people who want to stay for longer periods to explore what the city has to offer (like us).

What we discovered was a few open and accessible attractions in the core, but once you’d explored these and started to venture away from the medieval centre, we found locked doors, cold and annoyed people, and restricted access to historical buildings. And, when I say “historical buildings” I mean churches, the historical city hall, monasteries, galleries, museums, and other sights that you could only view from the outside. While at Castle Gravensteen, we were ushered through the site quickly because the staff “wanted to go home early that day.” Kidlet was disappointed because she was really interested in the medieval torture section and wanted to read more.

In Brugge, I went everywhere and met friendly people at every step of the journey… and spent days exploring the city. In contrast, we saw everything in Ghent immediately and were anxious to move on to the next place because there was nothing else to see or do.

So, back to my conversation with a local, if Ghent is serious about wanting to become more of a tourist destination (like Brugge), they need to rethink their community involvement in the tourist industry. If they aren’t particularly interested in promoting “sites,” then they need to think about what Ghent has to offer and about how to pitch and communicate/market this (like experiences, food, festivals, gatherings, relaxed place, theatre). But honestly, the preserved medieval history is the gem that draws people to Ghent.

And, now we head back to Paris… but not before charging my cell phone via pedal/kid power.

0 comments on “Some yummy food… and then back to Paris!”Add yours →