Near the beginning of the movie A Star is Born, you see Jackson Maine watching Ally as she sings the French song La Vie en Rose in a drag bar dressed up as the song’s original singer, Édith Piaf (pencil-thin eyebrows and all).

The singing of this particular monumental song is a foreshadowing and subtle shout out to Piaf’s own life in which she is well known for taking her lovers/husbands out of obscurity and making them stars as she herself spirals downward into a world filled with pain, sadness, and addiction.

Piaf’s birth name was Édith Giovanna Gassion and she was born on the streets of Paris to performing parents who abandoned her. She spent her childhood living in her grandmother’s brothel in Bernay and would later sing on the streets in Ménilmontant with her childhood friend Simone Berteaut.

One day in 1935, she chose to venture to a different part of town to perform, on the Champs-Élysées at Rue Troyon. It was here that she was “discovered” by Louis Leplée, a cabaret owner who encouraged and paid Édith to sing in his establishment Le Gerny’s under the name of “La Môme Piaf,” French slang for little sparrow.

She started to call him Papa Leplée and credited him for being an important mentor in the beginnings of her career. Less than a year later he was dead.

Montmartre, the mountain of martyrs, was long seen as the scrublands of Paris; a place where nothing could grow or flourish.

In the late 19th century, artists like Salvador Dalí, Claude Monet, Henri de Toulouse-Lautrec, Pablo Picasso, and Vincent van Gogh came to the top of the hill to soak in and find inspiration in an odd but paintable combination of windmills, barren landscape, run-down buildings, poverty, and bohemian freedom. The area still attracts street painters but the barren landscape is long gone.

As a free-spirited bohemian culture evolved at the top of Montmartre, around the lower part of the hill formed a darker nightlife filled with cabarets and dance halls filled by both the rich and poor and fuelled by excess and promiscuity.

Before Piaf became a big star, she fit in best in this world (remember, she grew up in a brothel) and moved around in mafia-like circles that frequented and extorted in these cabarets. There is a saying in the Montmartre subculture: Si tu ne paies pas… t’auras des ennuis… If you do not pay … you’ll get in trouble. The understanding is that in Montmartre, each cabaret owner paid a ransom to mobsters or they face possible scandal or death.

The Murder of Louis Leplée

Louis Leplée was considered the prince of the Montmartre homosexual subculture and his cabaret Le Gerny’s in Pigalle was thought to be a part of the underworld of gay prostitution, blackmail, and bribery. This is where Piaf worked. 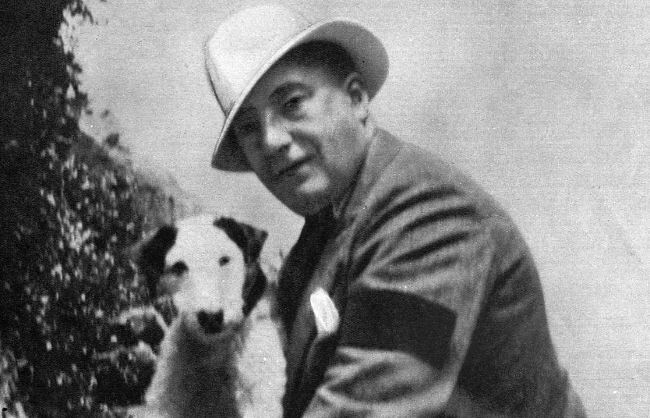 It’s difficult to separate the details of Louis Leplée’s death from the myth surrounding Édith Piaf because in her later years she was such a huge star and the details surrounding the murder seem to have evolved with time.

The murder of Leplée almost cost Piaf her career because she was a suspect. At that point in time, she wasn’t the Piaf who was the chanteuse of France, she was:

The little sparrow, in her repertoire of street songs with her gestures of a little girl beaten, a pale kid who rose up from the cobblestones. Police Magazine #282. 19 Avril 1936.

What is below comes from various Paris newspapers and magazines published in the weeks that follow the assassination. 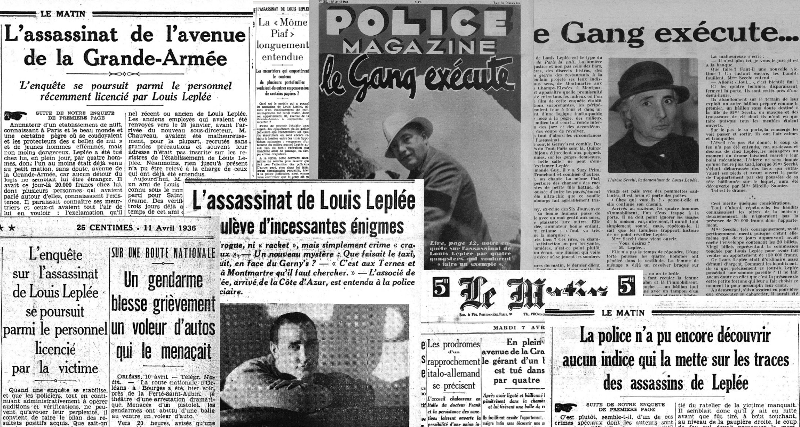 On the morning of April 6, 1936, gay club owner, Louis Leplée was murdered in his apartment. According to his housekeeper, four men pushed their way through the door at gunpoint and brutally assassinated Leplée by shooting him in the head while he slept. She said they were looking for ₣20,000 that was in the apartment, which they did not find.

Even though Piaf was not present or even physically capable of murder, she was accused of being “responsible” for the death and arrested while she at a cafe (the press was there to take pictures of her arrest). She was interrogated for hours and later released because there was no evidence.

The police thought that by working in the Le Gerny’s, Piaf brought the attention of her friends in the street mafia to the establishment. Albert Valette, one of her lovers, became a primary suspect in the murder but was never convicted.

There was a lot of speculation surrounding Leplée’s murder but the crime was never officially solved; coincidentally, his close friend, entertainment promoter, gay activist, and politician Oscar Dufrenne was murdered in a similar fashion a few years earlier.

The Wall of Love

It’s doubtful Édith has anything to do with the death of her mentor. In 1936, she was likely still feeling guilt and pain over the death of her two-year-old daughter and focused on cleaning up her life; Leplée was her way out of poverty. Plus, Édith’s entire life and career centred around love and acceptance.

Ironically, very close to the epicentre of all this violence in Pigalle is Le mur des je t’aime in Square Jehan Rictus, a piece of art that has the word love written in almost every language. While here we also stopped to listen to a man playing Édith’s music on an accordion.

3 comments on “Édith Piaf, the Murder of Louis Leplée, and Montmartre”Add yours →