The Arc de Triomphe has always been a rallying point for soldiers both starting and ending major campaigns in war. Dignitaries have passed under the arches, influencers have rested under the arch in death (including the unknown soldier), and world leaders have taken inspiration from its grandeur. Its construction was commissioned at the peak of Napoleon’s success (1806) and his remains passed under it 34-years later on their way to the Invalides after being brought back to France.

But, I’m not writing about these events. I’m writing about something a little more elusive and daring. Exactly 100-years ago, an unauthorized flight happened in Paris… through the Arc de Triomphe.

On July 14, 1919, seven months after the armistice, the French military planned to march troops along Champs Élysées and through the arches of the Arc de Triomphe. And, they planned for the Aéronautique Militaire (including the top French aces) walk on foot like the infantrymen and gunners.

This was seen as insulting to the men who fought in the sky. These men kept victory scores and had a well-defined pecking order that gave them hero status amongst other soldiers. And, the top Ally pilot (who was just shy of beating Manfred von Richthofen’s record) was a Frenchman: René Fonck. They took pride in their prowess in the sky. So, in defiance, pilots decided to send a single plane through the arch during the parade rather than walking.

This was a risky proposition but isn’t the first time French pilots considered flying through the arch; both Georges Guynemer and Roland Garros are said to have considered the feat but decided against it (and later died in the war).

Days before the parade, the ace chosen for the task, Jean Navarre, died while practicing for the event. This led to another pilot, Charles Godefroy, to take up the challenge in honour of his friend; but unfortunately, it was too close to the event and Godefroy wanted to take the time needed to study the structure, drafts, and practice ahead of his run.

To fly through the arch, the margin for error is small; the width of the arch is 14.63m. The flight was taken in a Nieuport… the exact model is debated online; French newspapers from 1919 only report it as the Nieuport-Le Rhone 120, which covers all models from this time period. A Nieuport 11 has a shorter wingspan (7.2m) but the French decommissioned that plane in 1916. The Nieuport 17 & Nieuport 27, much like the one flown by Billy Bishop and other ally pilots later in the war, were more nimble than their predecessor but had a longer wingspan (8.16 – 8.21m). 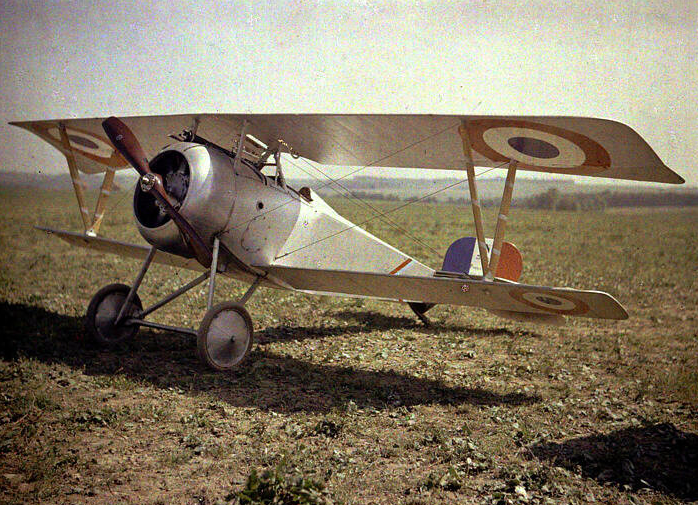 Godefroy successfully flew under the arch at 7:30 am on August 7th, the day before Jean Navarre’s birthday. The moment is captured by French reporter and aviation writer, Jacques Mortane.

Newspapers around the world carried the story for months after the event. Godefroy is said to have wanted to remain anonymous; however, I’m not sure I believe this claim. Jacques Mortane was a friend of the pilot’s (which is why he was filming the event) and Godefroy’s professional military photo and name was splashed all over the news that very same day (someone had to give the papers this information). 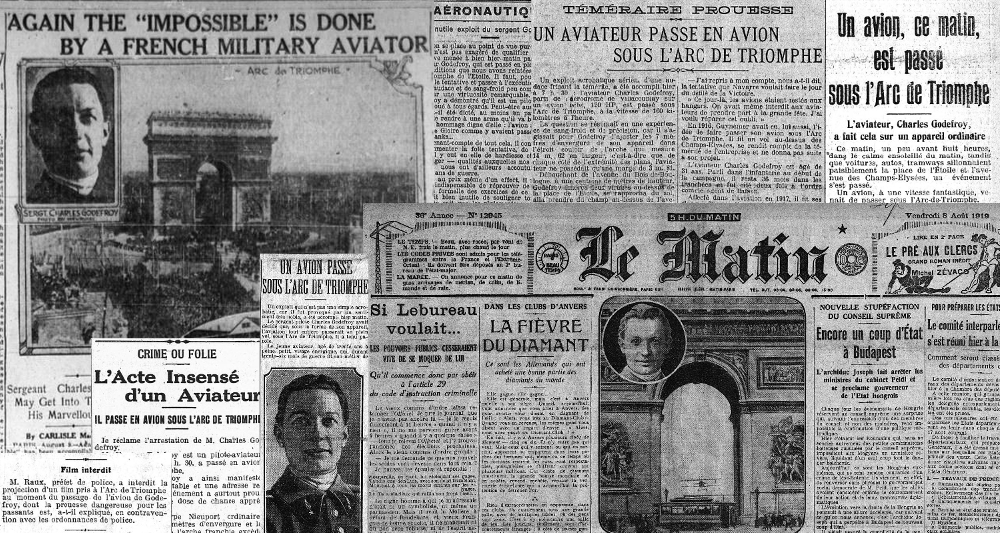 For taking the risk, Godefroy faced prosecution. Months later he was given a warning but by this point, he had already left Paris and was living North of the city.