Everyone has heard of Niagara Falls; they are one of Canada’s biggest tourist draws and a frequent honeymoon destination for newlyweds. This post is NOT about the Niagara Falls, it is about Canada’s other waterfalls (that no one knows about): the Montmorency Falls.

Located in Québec, these chutes d’eau are not as wide… but are taller than Niagara (at 83-metres). They are downstream from Québec City and flow from the Montmorency River, over a steep cliff, and into the St. Lawrence.

Like most waterfalls around the world, Montmorency is the setting for many an interesting historical story about ghosts, tragedy, love and suicide.

This is the Québec version of the lady in white.

Like every other version of a woman in white story, this one follows the pattern: the story revolves around a young woman who is from a rural area, love is involved, there is a tragic death, and a ghost is frequently seen by unsuspecting individuals.

In Montmorency, the ghost is thought to be Mathilde Robin. In 1759, in the middle of the Seven Years War, Mathilde had found her true love in Louis Tessier, a local farmer and member of the militia who asked for her hand in marriage. Her father approved of the match and the two were to be married at the end of the summer in 1759.

However, this was a turbulent time in Québec and Louis was soon sent to fight in the Battle of Beauport, which took place at the base of the Montmorency Falls on July 31, 1759.

The English forces were controlled by General James Wolfe who is famous for taking Québec during the Plains of Abraham. He would not be victorious during this battle; wet air from the falls and a sudden storm ruined the English gun power and the British troops were forced to retreat. Wolfe recorded 210-deaths in this journal. The French leader, Louis-Joseph de Montcalm, recorded 60.

However, for poor Mathilde, the French were victorious but her beloved Louis was one of the 60-militiamen who were killed. In her grief, it’s believed that she put on her wedding dress and threw herself from the top of the falls, where they had met the evening before. People have claimed to have heard her cries or to have seen her ghost in a white dress falling from the top of the falls. 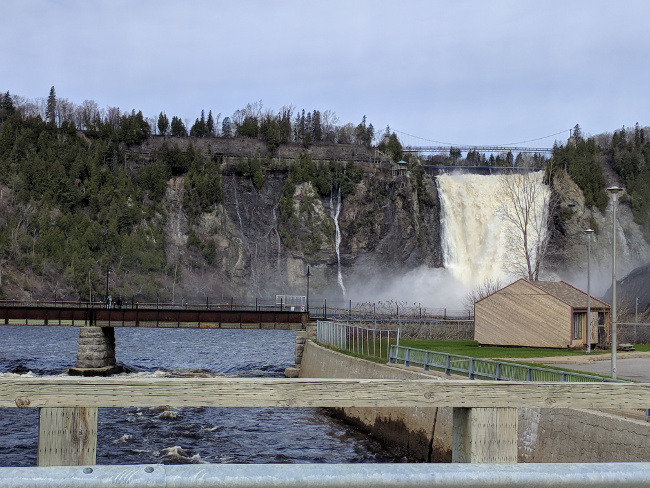 It’s unlikely to be a true story… or at least the part about the bride wearing white in 1759. As was seen in the previous post, brides didn’t wear white until after Queen Victoria’s wedding in 1840.