There are numerous graves at Père Lachaise with sculpted effigies of people sitting, lounging or sleeping on top of their tomb.

Seeing these made me immediately curious. Does this style have any particular meaning? Was this a Victorian mortuary trend? They seem to come from one particular era in history; is this significant?

My curiosity and attempt to answer some of these questions immediately took me down a number of interesting and informative paths.

Taphophobia (fear of being buried alive)

Obsessions with looking at the dead in Paris in the 1800s was akin to a modern public sporting event. This was seen as a necessity for people from the Victorian era who feared being buried alive. You see, doctors of the era lacked the knowledge/tools needed to properly assess whether or not someone was truly dead… and taphophobia flourished the Victorian era once people figured this out.

One way to make absolutely sure that someone was really, truly dead before burial was to place them in waiting mortuaries until the decomposition process started. Parisians made a show out of the practice.

What struck me is that many of these stone effigies of people sleeping resembled photos of people from the waiting mortuaries. 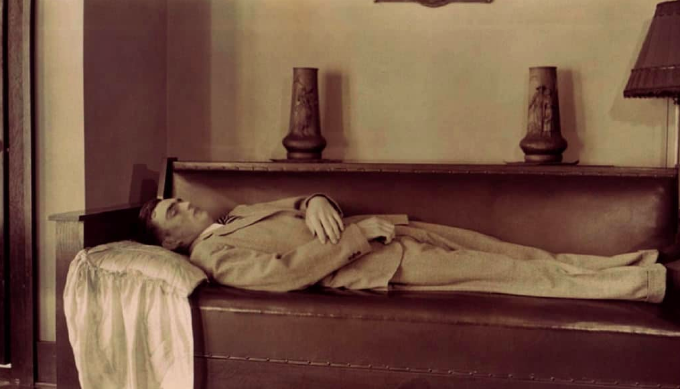 Could this be why sleeping effigies exist? Not likely. It’s just an observation.

Queen Victoria was a trendsetter. A great example of this is when she single-handedly revived the Honiton lace industry after it had all but died in England in the 1800s; and, at the same time introduced the concept of wearing a white dress to your wedding (why would you do that… it’s so unpractical).

You see, Victoria’s white wedding dress contained Honiton lace and the photographs that surfaced after her wedding immediately made it popular. This also happens to be the very first white wedding. 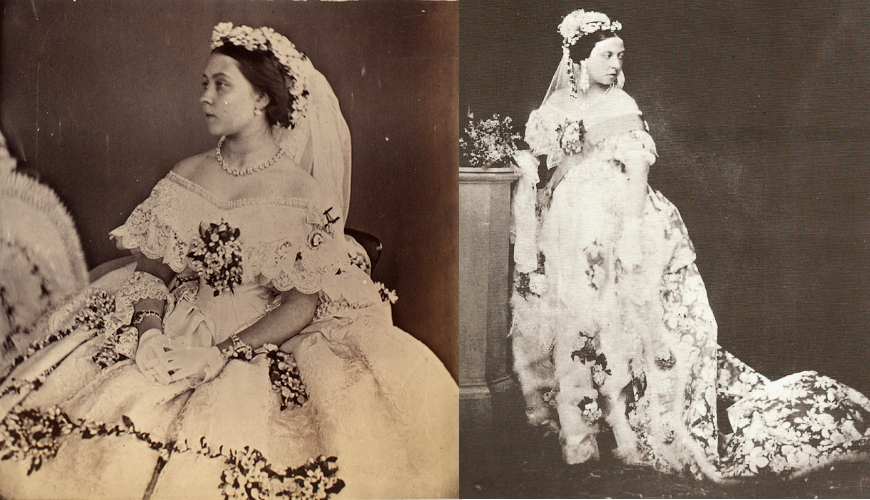 Victoria reigned during the era of the daguerreotype and during a time that saw major advancements in printing press technology. She could be considered the first “paparazzi media star” because she was constantly photographed for print. This gave people access to her style choices, which could then easily be copied.

In 1861, when Prince Albert died, Victoria was devastated. She commissioned Baron Carlo Marochetti to create his likeness (and hers) in slumber at Frogmore in the family mausoleum; eventually, knowledge of the effigies of a young Queen Victoria and Prince Albert found their way to the public. 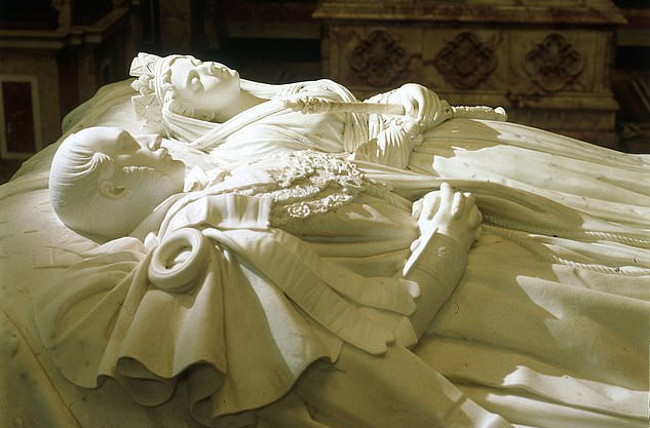 Did Victoria’s tragic sadness over the death of her beloved Albert make this practice mainstream? Stone effigies have long been used on the graves of important religious leaders and royalty after death, but it was not a common practice.

With the advent of the industrial revolution, people outside of royalty and the clergy had the means to hire sculptors and purchase materials like marble or bronze. Couple that with Victoria’s trendsetting and you possibly have the reason why sleeping effigies in cemeteries are suddenly common in the 1860s and later.

Victor Noir’s grave is what originally sparked this post. Noir’s real name is Yvan Salmon (Noir is his pen name) and he was an apprentice journalist for the newspaper La Marseillaise, made famous by its founder Henri Rochefort who wrote a continual stream of criticism of the government and ruling families, particularly Napoleon III. The second editor in chief was Jean-François Paschal Grousset, another outspoken writer who was born in Corsica.

In January 1870, during a flame war between two Corsican newspapers, Paschal Grousset believed he was maligned in a piece written by Pierre Napoléon Bonaparte called L’Avenir de la Corse. Grousset sent two of his employees (Noir and Ulric de Fonvielle) with a letter and instructions to arrange for a réparation par les armes (duel).

However, during the conversation, Pierre Bonaparte (the Emperor’s cousin) fired a gun at the two men. Victor Noir received a fatal shot at close range.

This is not the first time Prince Pierre killed a man. In his 20s, he killed a police lieutenant and was quickly sentenced to death. But, because of his family connections, his sentence was commuted and he was sent to live in the United States. Shortly after arrival in New York, he killed a man on the streets… and when his family sent him to Greece, he was involved in the shooting of another group of Albanian men.

Seems Prince Pierre was trigger happy but was also able to escape justice because of his connections. In the case of the murder of Victor Noir, Bonaparte was sentenced by La Haute Cour de justice to pay legal fees and a pension to Noir’s parents. He was told by his family to leave France, which he refused to do.

Conversely, all the journalists involved with La Marseillaise (Paschal Grousset, Ulric de Fonvielle, Olivier Pain, and Henri Rochefort) were sent to prison. This didn’t sit well with the people of Paris who are already disappointed and angry with the Second Republic.

The day after his death, Noir’s funeral procession was led by political activist Auguste Blanqui and followed by upwards of 200,000 angry people who opposed the unpopular ruling Napoleon family. Future Republican political candidates were only endorsed if they were …a été au convoi de Victor Noir.

Pierre’s acquittal on the murder charge caused enormous public outrage that erupted into a number of violent uprisings. To quell anger, a plebiscite forced changes to the French constitution that benefited the people in rural areas. However, this peace didn’t last long. It was the beginning of the end for the Second Republic.

As mentioned above, Victor Noir’s grave is what originally sparked this post. Noir was 21-years old when he was murdered. Newspapers say he was due to be married the next day.

Victor Noir was originally buried in Cimetière de Neuilly-sur-Seine. But, after the establishment of the Third Republic, his body was moved to Père Lachaise Cemetery. The bronze sculpture atop his grave was created by Jules Dalou 20-years after Victor’s death.

At some point in the last 130-years, people (women in particular) began to notice a large bulge in the pants of Noir’s sculpture; and, as word spread of “the bulge,” the sculpture began to draw women to the cemetery.

It’s said that if you put flowers in Noir’s hat, kiss his lips, and touch his penis (or shoes), you will soon find a husband, be fertile, and enjoy a good love life.