I’m back in Toronto… specifically, at the University of Toronto. This is the only place in Canada that offers SIYLI Training. The program is “highly interactive” (read: exhausting) so during this stay, I needed to stay safe and eat healthy food that wouldn’t trigger an allergy.

Below are some food learnings from the Bloor & Yonge area (near Yorkville)… and some from working on Bay in 2016. Note: anything in Yorkville is going to be more expensive because of the pretty buildings and high-end stores. However, if you head down Yonge street, the experience is more sketchy but the food is cheaper and authentic.

For me, every trip starts with sushi… sushi is a pretty safe bet for people with gluten, FODMAP, nut and dairy allergies (skip the soy sauce). In Toronto, there are so many sushi places that the trick is finding what suits your taste and budget.

Yamato Japanese Restaurant (below) is my default go-to in Yorkville ($30); it’s stereotypical, high quality, well-prepared sushi. If you’re looking to glam up and spend money, Kasa Moto is close too ($100).

On the other hand, coffee in the morning around Yorkville can be tricky unless you like Tim Hortons or Starbucks. Finding gluten-free treats is harder.

For me, a morning quick food grab is a soy latte and cashew cookie from Balzac’s (789 Yonge St). And, don’t let the size of the cookie fool you… their cookies and brownies are super dense. I only ate half a brownie because I dropped the rest on the sidewalk… and was good for at least a couple of hours.

There is a Balzac’s in Union Station (on the UP platform) that opens at 6 am (for those of you taking an early morning train to the airport or VIA to another city). This kiosk does NOT have gf treats.

I’ve not seen places in the Bloor & Yonge area that serve big American breakfasts; but, I’m sure they exist.

Freshii does a breakfast burrito and the one on at Yonge & Bloor makes a decent soy latte. Also, the Sandwich Box has a nice gluten-free breakfast sandwich; the only catch is they don’t open until 10 am.

Every city has a signature food that is unparalleled anywhere else (including the country of origin). Calgary = Vietnamese phở, London = curries, Los Angeles = Peruvian… I could go on forever.

Toronto’s dish is khao soi, with a thicker coconut and spice base than the original. And, from what I’ve seen, the unique recipe has spread throughout the entire city. 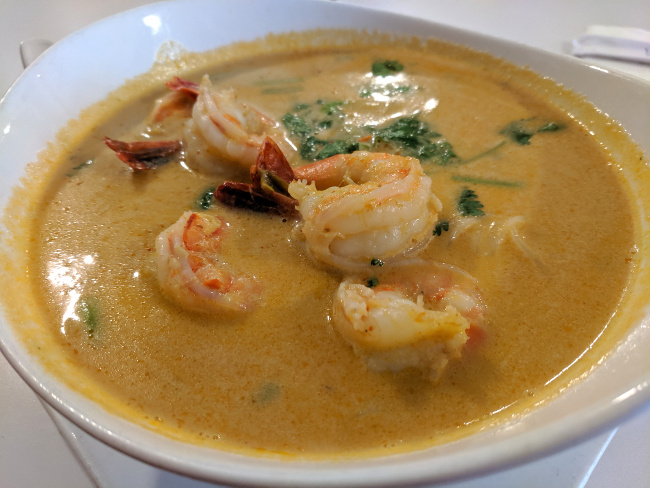 Above is a bowl from the Thai Fantasy on Yonge (578 Yonge St). They were kind enough to substitute the egg noodles with rice noodles to make it gluten-free ($15).

Finally, in Yorkville, there is a little place tucked away under the high-end retail spaces and hidden from the public eye (unlike Trattoria Nervosa, which is close by). This is called KOKO! Share Bar. I love KOKO because they’re the opposite of the loud, boisterous, you-can’t-get-in-without-a-researvation places that riddle Yorkville. They’ll always make space for you without fuss.

KOKO is a Korean fusion bar with all sorts of oriental dishes (including traditional sushi); however, my favourite dish is the bibimbap ($20). They do the crunchy rice perfectly and have the right mix of flavours. If you eat a plant-based diet, there is a kimchi version of the bowl. The egg is an add on. 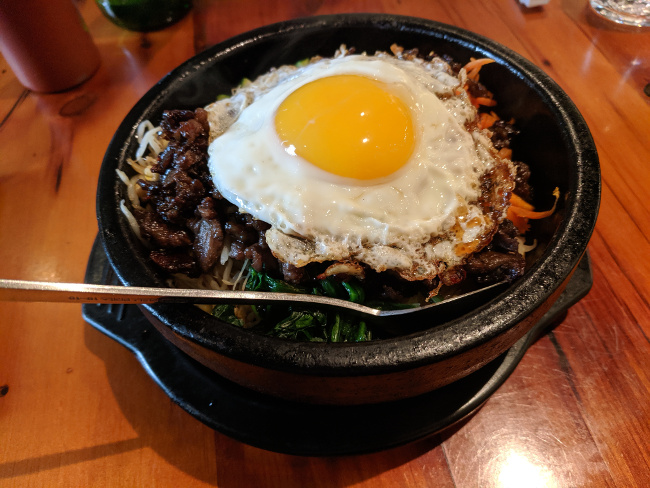 This is by no means an all-inclusive list. Toronto is a fantastic foodie city (here are some previous food posts from Toronto) so it’s easy to find what you need and/or crave. This is simply a starting point for people new to exploring this part of the city!