Herman Melville said that artists have to take a dive, and either you hit your head on a rock and it splits your skull and you die, or, that blow to your head is so inspiring that you come back up and you do the best work you ever did. But, you have to take the dive. And you do not know what the result will be. — Sendak during a 2011 TateShots Interview

When I took the photos below in 2016, many of Maurice Sendak’s illustrative works were caught up in a legal dispute between the Rosenbach Museum & Library in Philadelphia and the Maurice Sendak Foundation. After his passing in May 2012, there was disagreement about who owned elements of his work.

This is a rather ironic ending for a pioneering but sensitive man whose life was already filled with isolation and cultural contradiction.

Sendak’s Jewish family immigrated to the US from Poland two decades before the beginning of the holocaust; they survived the horrors that many in his family could not escape. This was a constant shadow that loomed over his childhood years.

In addition, Sendak was both gay and an atheist… two things considered culturally taboo in the post-war United States (so he hid them). And, throughout his career, his books were labelled as inappropriate by many librarians who refused to put them on the shelf.

On becoming a children’s illustrator, he says that because he didn’t have much confidence, he hid inside the modest world of children’s literature… a world long defined as a realm where only women could work. It was here that he felt he could express himself entirely in a place where no one could find him.

But we all know that this isn’t true. Maurice Sendak became one of the world’s most well known and beloved children’s illustrators. His most famous book is Where the Wild Things Are.

The illustrations of “Wild Things” in Where the Wild Things Are are modelled after his unkept and strange Jewish relatives (from the perspective of a young boy). He came to the book with the view that children need to know that there is bad in the world, but that they are surrounded and protected by people that love them.

Where the Wild Things Are overshadows a lot of Sendak’s other works. We tend to forget that he was the illustrator for Little Bear (both books and TV series), could have been an illustrator of The Hobbit (but wasn’t because of a typo), and contributed to illustrated literary works like the Turn of the Screw, Mother Goose, and various Hans Christian Andersen books. 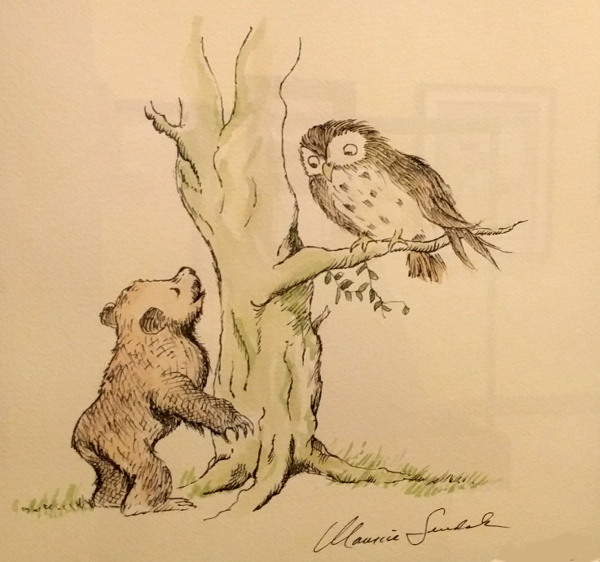 Towards the end of his life, Sendak did a fair number of interviews where he reflected on his “isolationist” life.

It’s sublime to just go into another room and make pictures. It’s magic time where all your weaknesses of character and all blemishes of personality and whatever else torments you fades away. Just doesn’t matter. You are doing the one thing you want to do and you do it well and you know you do it well and you’re happy. The whole promise is to do these work. What a transcendent life. — Interview

I’m not sure how the photos that I took at the Maurice Sendak: 50 Years, 50 Works, 50 Reasons exhibition at Toronto’s Public Library fit into the legal disputes about Sendak’s work (if at all). What I do remember is that the showing was an immensely popular event… kids love Maurice’s books.

0 comments on “Where the Wild Things Are”Add yours →