Of Love and Other Demons is the title of a book written by Colombian author Gabriel García Márquez and published in 1994. This book was the driving theme behind our search for ghost stories in Cartagena.

But, before we get to the telling of that story, here is a few pictures of things that would otherwise go unnoticed in the city unless they were pointed out. These come to us by locals and I hope we’ve remembered the stories correctly.

On many of the houses, you’ll notice that the edges of the terracotta are turned up with a sharp point at the end. These aren’t designed to keep pigeons or other birds away, they are designed to keep witches from landing on your roof. 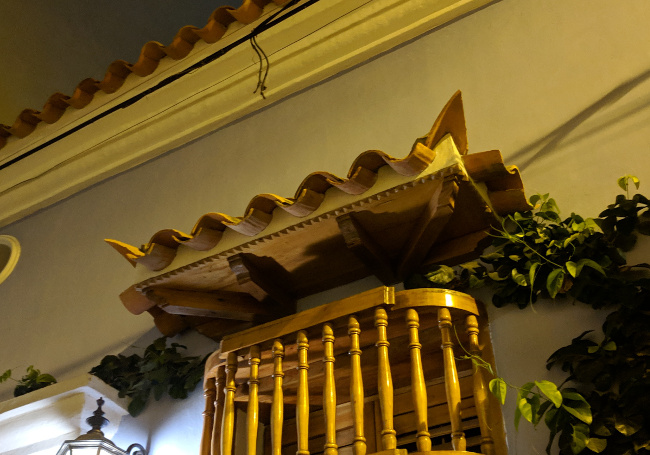 Iglesia de Santo Domingo has a crooked bell tower on its roof. The story of how it got this way is frequently told to the children of Cartagena.

Legend has it that when the church was being built, one of the construction workers was the devil and he created chaos on the construction site until he was recognized by the people of Cartagena. When the tried to expel him from the site he knocked the bell tower out of place, which is why it is askew.

Once off the building, locals drove the devil into a well and covered him with rocks. All the wells in the city were then sealed to keep him from escaping.

This is why when you find a well site in the city, it is covered, filled, and has been taken over by vendors.

The name of this street is a clue as to this story: the street of the falling dead. During the cholera epidemic in the city (1849), the carts of dead people would pass through this area on its way out of the walled city to the Cementerio de San Diego.

But, because the cobblestones were so uneven, bodies in caskets would frequently fall off the carts onto the street. If they were being carried, the bearers would fall because of the uneven stones.

Ok.. if you’ve read Of Love and Other Demons by Gabriel García Marquez, you’ll know that the book is set in Cartagena and takes place in the Convent Santa Clara. 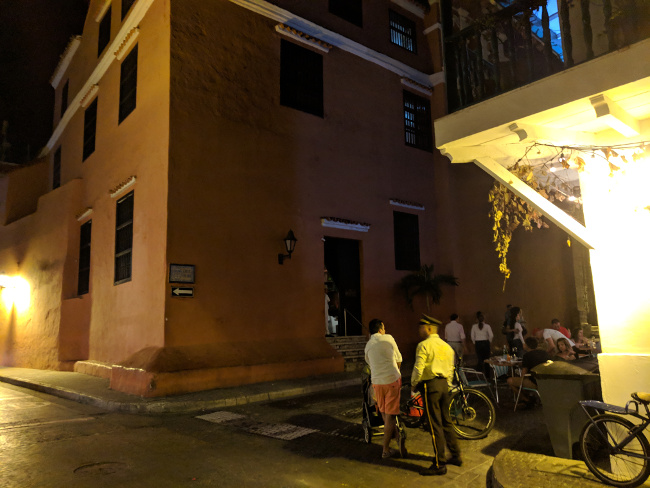 The convent is real and the characters from the book are inspired by the bodies of those interred in the inner crypt of the convent. In October 1949, when the convent was sold to a high-end hotel chain, Gabriel García Marquez was working as a reporter and was asked to cover the demolition of the crypt.

He says in the book notes that during the excavation of one of the tombs,

“The stone shattered at the first blow of the pickax, and a stream of living hair the intense color of copper spilled out of the crypt. The foreman, with the help of the labourers, attempted to uncover all the hair, and the more of it they brought out, the longer and more abundant it seemed, until at last the final strands appeared still attached to the skull of a young girl… Spread out on the floor, the splendid hair measured 22 meters, 11 centimeters.”

The name on the tombstone was Sierva Maria de Todos Los Angeles, with no legible surname. The literal translation of her name is the servant Maria of all the angels.

Seeing the flowing red hair reminded Gabo of a story told to him by his grandfather “of a little twelve-year-old marquise with hair that trailed behind her like a bridal train, who had died of rabies caused by a dog bite and was venerated in the towns along the Caribbean coast for the many miracles she had performed.”

This young girl became the main character of his book, Of Love and Other Demons. We were told by one local that the body of the long-haired girl could not be removed… or that the workers did not want to remove the girl because they thought they’d be cursed. It’s said that she still rests in what is now the El Coro Lounge Bar in the Hotel Sofitel Legend Santa Clara Cartagena.

We did not visit the lounge but did have the opportunity to visit the hotel for dinner one night; the main restaurant is called 1621 for the year the convent was built. The ambiance is special and a tad bit surreal.

Ghost stories from the hotel are a given because not only was the building a convent that survived sieges on the city, war, pirates, and see extreme hardship… it was also repurposed for a time as a hospital, an orphanage, a medical school, and as a penitentiary. Surely some traumatic event energy seeped into the walls and remained there.

One of the stipulations of the renovation was that the hotel chain had to preserve the building as a world heritage site, so the convent walls and many features are original (with energy intact).

For us, there was nothing untoward that happened. We ate some really fantastic food and were spoiled by the very friendly people who work in the restaurant.

However, it wasn’t lost on us that the restaurant is in the courtyard, which is where Cartagenans traditionally buried their dead. The first public cemetery was built in the city in 1816 to handle the thousands of people who starved during Pablo Morillo’s siege of the city. But in the hundreds of years before this, the deceased were usually interred in your house. Construction workers still find bones during renovations on houses in the old city.

Those who worked on the convent renovation have publicly shared stories of what they found buried in the floors and walls. Eerily, the nuns were found laid out in a common grave looking like they did on the day they took their vows to Christ, with wedding bands and crowns of flowers in their long flowing hair that continued to grow after death.

Search for cuentos de fantasmas del convento de santa clara de cartagena and you’ll find all manner of ghost stories. There’s a nun that likes to grabs construction workers by the ankles, there’s a nun that polices the streets around the convent, there’s a headless monk (I think every region in South America has a headless monk folk story), and areas of the building where people simply refuse to go.

We asked one local to tell a story… and we received a never-ending flow of diatribe that quickly became so overwhelming that we forgot important details amidst all the missing items, cold spots, secret passageways, spy holes, and corpses floating in chloroform.

Rather interestingly, in the 1980s when Gabo moved to Cartagena, he bought the lot next to the convent and built a house overlooking the ocean. And, almost 50-years after watching the excavation of Sierva Maria in the Convent Santa Clara, he still remembered the girl with the flowing red hair enough to write Of Love and Other Demons.