This was a short little trip to Toronto. But, this time around I got to do something that I’ve always wanted to do but haven’t been able to because I was flying from another country… or on a large plane.

This time I got to fly into the Billy Bishop Airport… and avoid Pearson.

For some reason, even after hearing the name Billy Bishop many many times, it never really clicked in my brain that the airport is named after the Billy Bishop… the world-war-one-flying-ace and Canadian hero.

It didn’t register until I saw a replica of Little Daisy (French, Nieuport 17) at the airport.

Billy Bishop was the British Empire’s top World War 1 combat pilot with 72 confirmed victories for the RFC. This is not far off from the Red Baron who had 80 documented victories (the British only confirmed 73 of these).

After the war, he and fellow pilot Billy Barker formed Bishop-Barker Company, later known as Bishop-Barker Aeroplanes. The company flew charters and sold airplanes out of Toronto’s harbour and Armour Heights.

There are several displays with Billy Bishop collectibles at the airport and you don’t need to have to be on a flight to see them. Just take the tunnel to the airport and meander around.

This tunnel to/from the airport takes you out by one of my old mysterious friends: the Canada Malting Company (from this post). 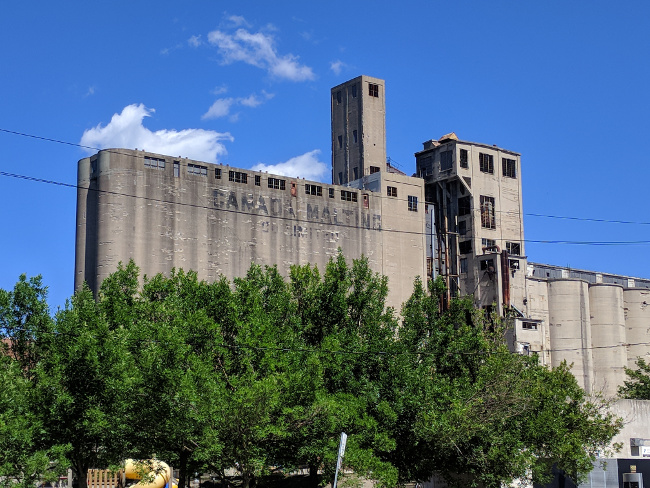 Beside it is Ireland park, which I thought I wrote about previously… but I can’t seem to find a post that mentions it.

The park is a memorial to the many people who left Ireland during the potato famine only to arrive in Canada and die from disease or starvation… (or die on the journey).

Finally, the wonderful thing about flying into the Billy Bishop airport is: if your destination is anywhere in Toronto’s core, you can walk or bike to your destination (using Toronto Bike Share)! And, explore things along the way.

2 comments on “8-hours in Toronto”Add yours →