There are two grain storage silos that standout… quite literally… as hotly contested properties; the city often refers to these as the “bookends” of the waterfront area. There were once three grain buildings but only two originals still stand the Canada Malting Company silo and the Victory Soya Mills silo. Another silo, the Maple Leaf Mills silo (previously Toronto Elevator Company), was torn down in the early 1980s. 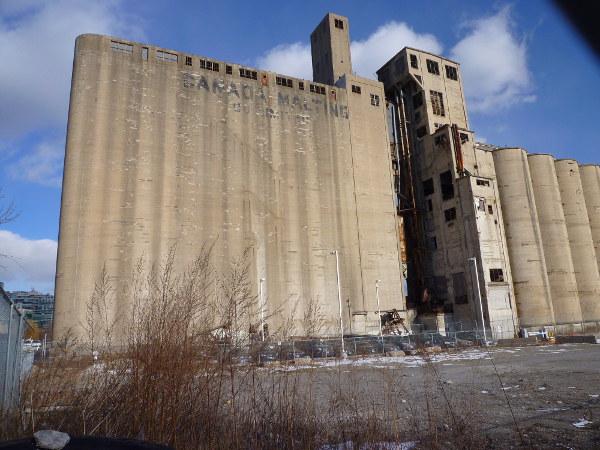 The other end of the “waterfront bookends” that mark the Toronto shoreline is the Canada Malting Company silos located at the bottom of Bathurst Street at the Eireann Quay by the Billy Bishop Toronto City Airport.

A grain elevator has stood on the premises here since the 1800s. This is how wheat and barley from the prairies got distributed to communities (both US and CA) along Lake Ontario. But traditionally, silos were always made from wood and the combustible nature of grain made it a fire nightmare. After the last Toronto grain fire in 1908, which came on the heels of the financial panic of 1907, all Ontario grain storage and malting operations moved to the existing Canada Malting plant in Montreal.

It wasn’t until the 1920s that the company decided to resume operations in Ontario. The idea to re-introduce grain elevators for the production of malt in Ontario may have in part been due to prohibition. Consumption of alcohol was banned in the 1920s in all Canadian provinces, but federal law did not affect production for export and for those breweries close to the U.S. border (like Toronto) it was a prosperous time. Also, because of one of the founders (below), there was a sudden boom in industrial and cement construction; to boost lagging cement sales.

There are two sets of silos developed during different periods: the South grain elevators (1928), which used an experimental explosion resistant design introduced by architects in Chicago (1924). The later North grain elevators were designed by E. C. Miller, an Afro American architect out of Atlanta. He designed the next generation of silo that allowed for improved grain protection and capacity. These two silos still sit next to each other, only separated by a marine leg in the middle. These are all that remain from the original plant and they’ve been on the City’s inventory of heritage properties since June 20, 1973. 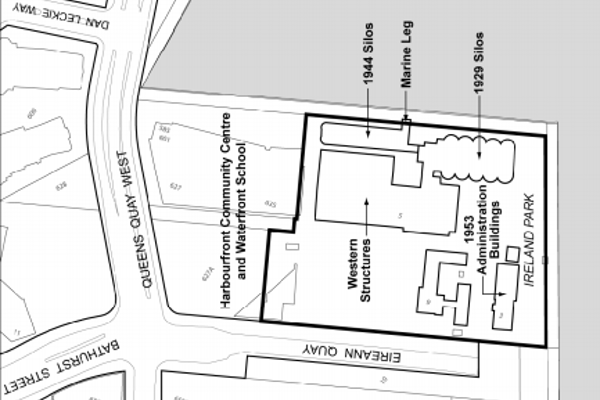 This building is well known to Torontotonians because of all the fuss and muss surrounding the preservation of the site. People have been fighting over what to do with the silos for years. My local friend tells me that for a time there were a group of squatters camped out on the property who stuck around long enough to almost make an ownership claim based on squatter’s rights. They were forcibly evicted.

The People Behind the Silos

While E.P. Taylor’s name was once splashed all over newspapers in Canada, a lot less is known about the men behind the Canada Malting Company. I spent weeks digging through historical records, newspapers, and articles trying to find some snippet of information about the men behind Toronto’s malting silo (or more succinctly, the malting company itself); even the Canada Malting website itself doesn’t freely give up any information about the company’s founders… or even the city of Toronto in all their historical documentation, evaluations, and environmental reports.

The first man on the founder’s list is Lionel Herbert Clarke, the 12th Lieutenant Governor of Ontario and the first chairman of the Toronto Harbour Commission (1911). 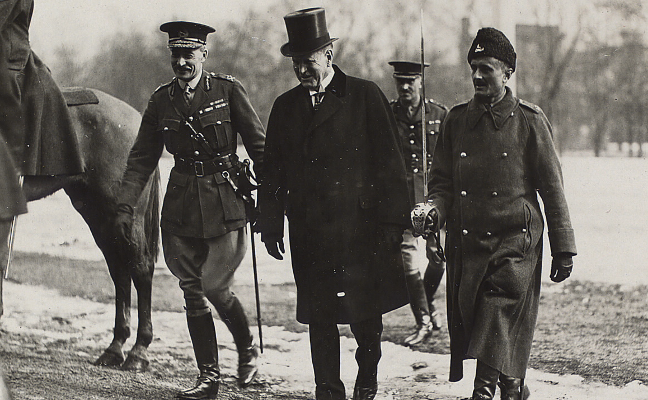 Long before he was extremely active in Ontario’s political landscape, he founded his own company: L.H. Clarke Brewer & Maltster (late 1800s) and used various locations around Lake Ontario for milling, malting, and brewing (e.g. Morton’s Brewery in Kingston and the Palmerston Brewery). It was this company that formed a malting partnership with W.D. Matthews & Company in 1895. The Canadian Malting Company was formed five years later and Clarke was named president.

Considering his illustrious position in Ontario, very little is known about Clarke. But after consulting the “loyalist bible” (Genealogies of United-empire-loyalists and Other Pioneer Families of Upper Canada (1895)) I was able to find more information about the Clarke family; and, while Lionel is elusive, his father is not: the Irish born Dr. William Clarke, Mayor of Guelph and member of the Orange Order. 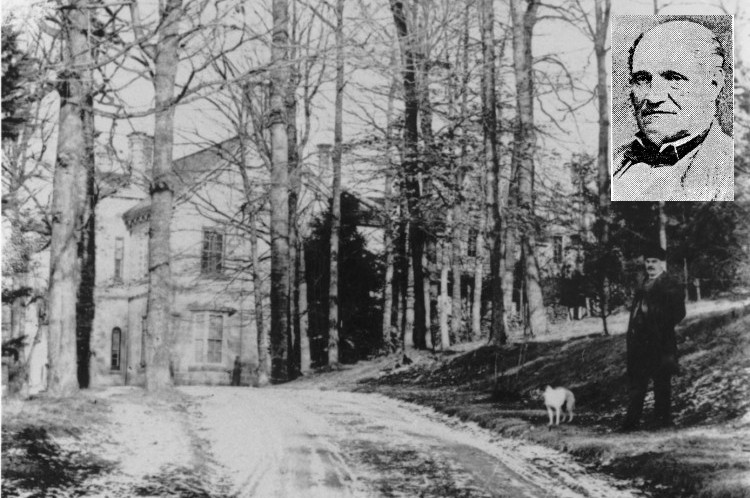 Dr. William Clarke, an outspoken doctor and surgeon, left Ireland in 1835 when the British began to investigate various members of the Orange Order; and, rather than face imprisonment or possible execution, he fled to Upper Canada. It was here that he flourished as a doctor and met his well-known wives, the first of whom was Laura Ann Secord (d. 1852), daughter of Laura Secord… (yes, that Laura Secord). The couple had three children, one of whom died in infancy.

After spending time in Scotland to learn about beer, William and his son Lionel formed a brewing partnership in Palmerston, Ontario when Lionel was only 19-years old; this was the beginnings of his brewing career. And, it was here that the son developed his sense of innovation and fortitude (and helped develop the town of Palmerston) before expanding the business prowess to cities like Montreal, Toronto, Winnipeg, Calgary and Thunder Bay. 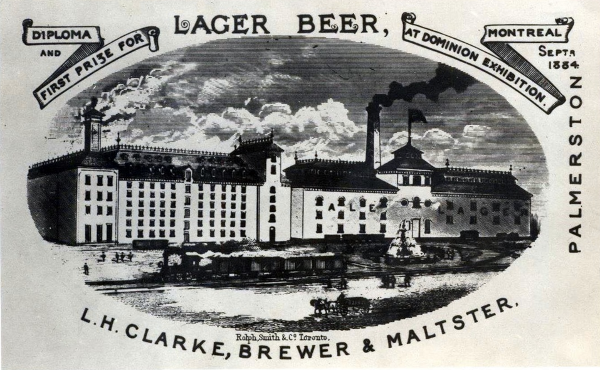 Somewhere along to the way Lionel Clarke met his business partner: Wilmot Deloui Matthews. Matthews comes from a family of Methodist missionaries who came to Canada in the 1790s (Abner and Roswell Matthews) from New Hampshire and who started out in Ontario as woolers, carders, and millers… eventually evolving into grain merchants.

Matthews’ first business was called the St. Lawrence and Chicago Steam Navigation Company Ltd., formed for the sole purpose of carrying grain down the lakes. One of the ships was even named after Matthews: the W.D. Matthews. It was a natural match for a brewer and a grain trader to form a partnership. 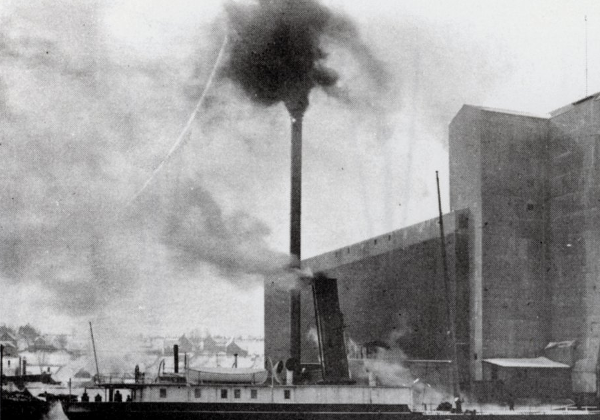 But, Matthews’ business savvy didn’t stop here. He managed to work his way onto the grain board of Ontario, he founded the Toronto Incandescent Electric Light Company Limited and shortly after became a director of the Canadian General Electric Company Limited.

Next he formed the investment firm Osler and Hammond and used this as a jumping point to become a member of the board for both the Dominion Bank and CP Rail. From here he became involved in construction, mining, cement, iron… and the commodities list goes on and on and on. It seemed there was no pie that Matthews did not have his fingers in… and he was able to use his connections in the investment and banking worlds to make sure that each of these companies had the capital needed to continue during depressed economic times.

Knowing all of this information, it only makes sense that a partnership formed between Lionel Clarke and Wilmot Matthews would lead to the bringing back of malting and brewing to Toronto. Especially when all the stars lined up and Clarke became a member of the harbour commission and the building of a large and modern cement silo would help sagging cement and steel sales (for companies owned by Matthews). However, neither would live to see the harbour front silos; both died before construction began. 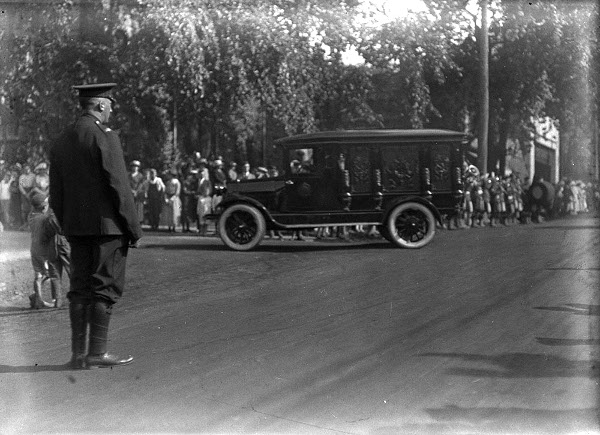 Any work that was carried out by the Canadian Malting Company after their deaths was done so by their children… later grandchildren… and even great-grandchildren.

The most immediately connected of these was Wilmot Love Matthews, who married the daughter of Edmund Osler, his father’s business partner at the Dominion Bank and a prominent Toronto financier.

Lionel Clarke’s son, Eric Sydenham, was the managing director of the Canada Malting plant in the 1940s and 50s.

Previously: The Person Who Built the Abandoned Victory Soya Mill