There are two grain storage silos which standout… quite literally… as hotly contested properties; the city often refers to these as the “bookends” of the waterfront area. There were once three grain buildings but only two originals still stand: the Canada Malting Company silo and the Victory Soya Mills silo. Another silo, the Maple Leaf Mills silo (previously Toronto Elevator Company), was torn down in the early 1980s. 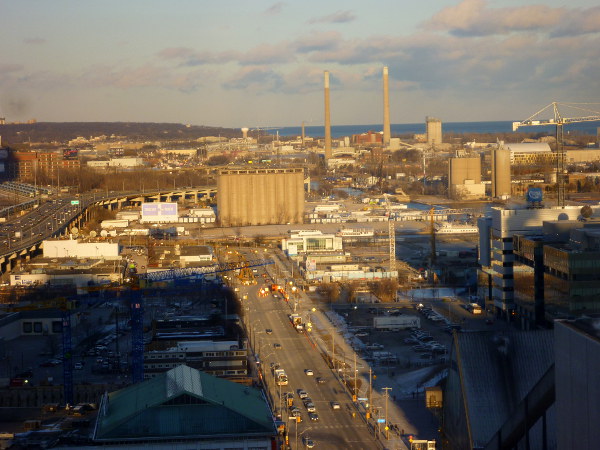 The first of these is on the waterfront’s Eastside: the Victory Soya Mills silo on Lake Shore Boulevard East. It now lays abandoned and sticks out like a thumb. To locals and tourists, it’s known as the place to park when you are taking a cruise of Toronto’s waterfront on Toronto Harbour Cruises. The silos cannot be torn down because they were designated a historical property by the city in 2004. The rest of the complex was demolished in 1998.

The man responsible for the silo is E.P. Taylor, a Canadian financier and creator of Canada’s first investment and holding company, the Argus Corporation. Taylor created Sunsoy Products Limited (originally Soy Bean (Sunroy) Products Limited) as a subsidiary of the Brewing Corporation of Canada Limited (a.k.a. Canadian Breweries) in 1936. The Canadian Breweries was a company that Taylor founded by merging several breweries into one, thus making him the beer king of Canada.

He later renamed the company Victory Mills Limited after World War II in honour of the Allied victory. The buildings themselves completed construction after the war in 1948. 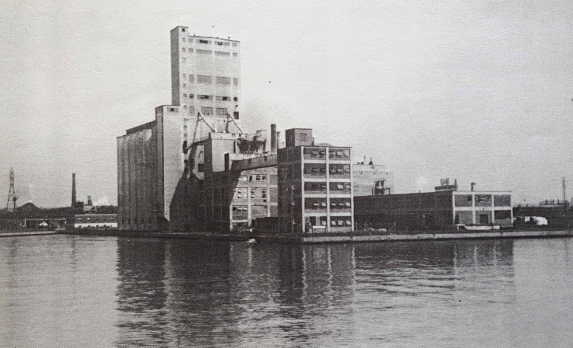 The Family Behind Victory Soya Mills

The name E.P. Taylor is not one you hear much in Canada these days, but at some point, Eddie (Edward Plunket)’s name was on the lips of every gossiper in the country. He was once the Canadian equivalent of J.P. Morgan or J.J. Astor (without the Titanic bit). He lived an aggressive life both in business and in the world of horse racing and breeding. He produced horses for the Queen (UK) and opened his home to the Kennedy’s whenever they visited Toronto. 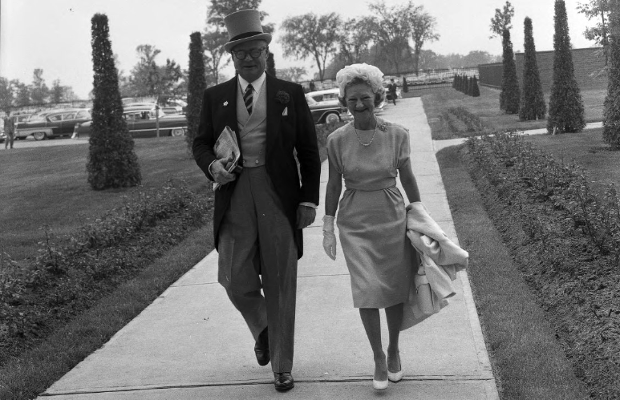 Eddie owes his beginnings to his prominent and influential maternal grandfather: Charles Delamere Magee. Magee was one of the founders of the Bank of Ottawa (later purchased by the Royal Bank of Canada) at a time when it was the grain dealers, flour millers, and beer makers of Canada who formed many of the first banks so they could raise the capital needed to fund business interests. 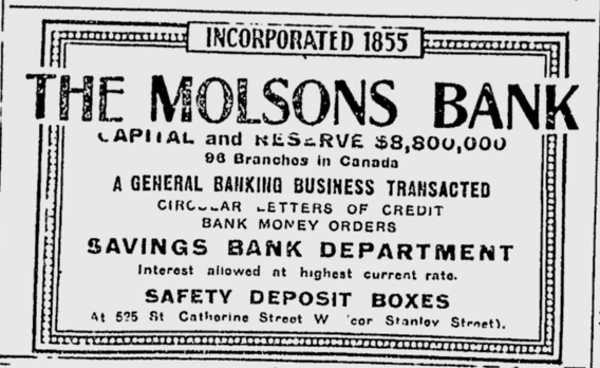 It’s likely that any financial advice that came from Charles before his death in 1918 influenced Eddie’s future as a savvy businessman in the investment world. During the war, Eddie was sent to live with his grandfather and during this time he was schooled on the ins and outs of financing and business.

The old man apparently saw his young grandson’s potential, his interest in the world of business, and in what he, Magee, had accomplished over the years. So he took the time and trouble to tell Edward about the intricacies of some of the banking, trust company, railway, and other corporate deals he had made, and how he obtained his financing, especially in England. — Fred Taylor: Brother in the Shadows by John Virtue

Magee’s wife (and Taylor’s grandmother) was Hilda Marion Cayley, the granddaughter of Sir John Beverley Robinson, 1st Baronet, Chief Justice of Canada, the leader of the Family Compact, and member of the Orange Order. This connected the Magee and Taylor families to the peerage of England.

Magee was the major shareholder in Brading’s Union Brewery, founded in 1865 by Harry Fisher Brading and his two partners. After Brading’s death in 1903, his son took control of the company with his good friend Magee and renamed the business Brading’s Brewing Company Limited; and, when Brading became sick in 1914, Magee took over full control. In 1923, E.P. Taylor was named President of Brading’s at the ripe age of 22. A few years later, during the later year of prohibition, Taylor formed the Canadian Breweries Company and merged several struggling breweries into one national beer conglomerate.

This couldn’t have sat well with his brother-in-law, the Archdeacon J. M. Snowdon and the founder of St. Stephen’s Anglican Church in Ottawa. It was the church leaders of Canada and women’s Christian societies who diligently and actively spoke out about the evils of alcohol during the temperance movement and prohibition. Though, many argue that Ontario in actuality did not actually experience prohibition because it was still exporting alcohol. 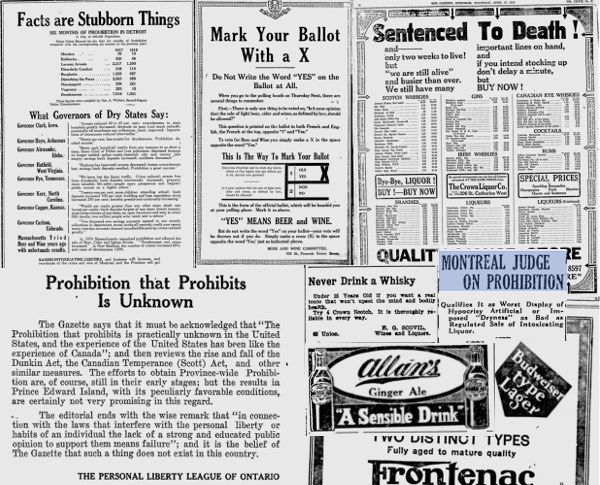 Eddie married Winnifred Thornton in 1927. The couple had three children: a daughter Judith, a daughter Louise, and a son Charles. Both Charles and made their mark on Canadian History: Charles as a journalist and author… and Judith (Mappin) as a philanthropist and member of the Order of Canada. They rubbed shoulders with presidents, prime ministers, royalty, and the world’s richest elite.

Not much is known about his daughter, Louise, a fashion editor for Glamour Magazine in New York. She was once engaged to Billy Wallace, the British peer linked to Princess Margaret and British actress Kay Kendall. 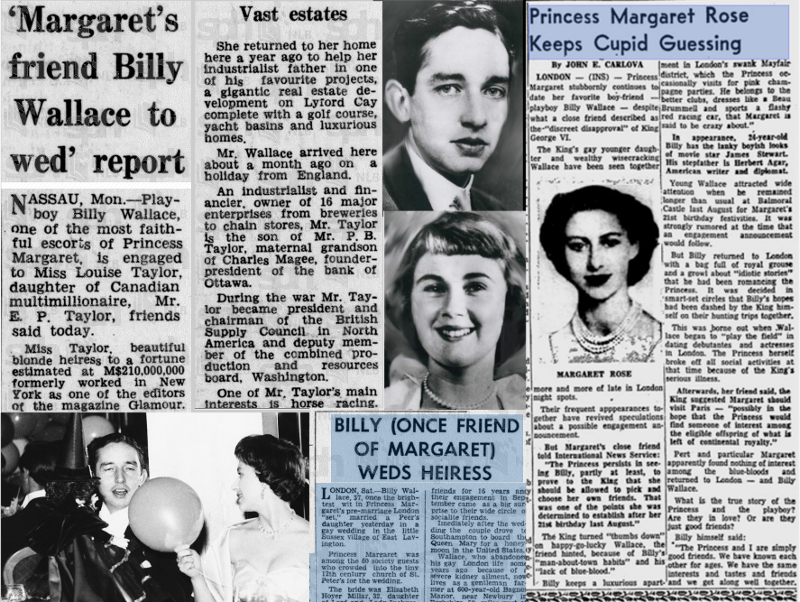 After the announcement of their engagement, it silently disappeared into obscurity, likely because Billy Wallace the playboy was “not husband material.” He was frequently engaged but only married once late in his life.

Witty and wealthy, he lacked only looks (Princess Margaret’s biographer referred to him as “the most chins of the chinless wonders”). Wallace was the sole heir to a wealthy father and stepfather and owned a huge family estate in Sussex. Both Kay and Margaret had entertained matrimonial thoughts about Wallace: indeed. Margaret was briefly engaged to him in 1948. But he proved not to be husband material for any woman until his only marriage, in 1965. — The Brief, Madcap Life of Kay Kendall by Eve Golden

In 1954, Victory Soya Mills was sold to Procter & Gamble and then to Central Soy Incorporated in 1980. All the Taylors listed above have since passed on; with Eddie dying on May 14, 1989, at his home in an exclusive Lyford Cay community that he built for the rich and famous in the Bahamas.

Next up: The People Behind the Abandoned Canada Malting Silo