Located in the heart of Cabbagetown, the Necropolis in Toronto has been a witness to many of the struggles felt by Irish Canadians in the 19th Century. In a way, the history of these struggles is laid out in the Necropolis (1850) and if you know where to look, it’s easy to find.

The Fenian Raids is one piece of Canadian history that rarely gets acknowledged or taught in school.

Remember in the last post… New Brunswick was often the first port of entry into North American for the Irish during the 19th century?

Well, not all of those immigrants stayed in New Brunswick. Many of the Irish who came to North America during the potato famine (1845-1852) migrated West to Toronto or South to the U.S. and later took up arms during the American Civil War (1861-1865). It’s said that there were entire Irish units fighting for both the Confederacy and the Union.

At the end of the American Civil War, many of these Irish who fought found it difficult to adjust to civilian life and instead focused on fighting for Irish independence. Some returned to the Emerald Isle to fight in 1865, while others stayed in the United States and joined the rapidly growing Fenian Brotherhood.

In 1866, the Brotherhood came up with a plan to occupy Canada; and, once the Fenians had control of the country, they’d use this to negotiate independence for Ireland. At this point, Canada was still under British rule and had not yet achieved confederacy (1867).

The brotherhood planned a series of raids that were focused primarily on key points in Quebec, Ontario, New Brunswick, and Manitoba. The first battle was for Campobello Island between New Brunswick and Maine. The Fenian Army, led by John O’Mahony, arrived in Maine and fired shots at the Island. The British retaliated by sending Royal Navy warships and British regulars from Halifax. They pushed the Fenian Army back into the U.S. where the group dispersed.

The only thing this raid accomplished was the realization that New Brunswick was vulnerable and needed to join both Upper and Lower Canada in talks about forming the Dominion of Canada (a.k.a confederation).

So, how does this fit in with the Necropolis in Toronto?

Don’t forget that in 1866, Toronto was a city split between the Catholic and Protestant Irish. Many Catholic Irish-Canadians had sympathy for the Fenians, while the Protestant (Orange Order) Irish were generally loyal to Britain and held powerful positions in government.

Toronto was a key city and the Fenian raid on Upper Canada came from three directions: Buffalo, Detroit, and Chicago. The first and only successful battle took place in Ridgeway, Ontario. It was here that the newly formed Canadian militia went up against the Fenian Army. The young and inexperienced Canadians (many of them were students) were no match for battle-hardened Civil War veterans. 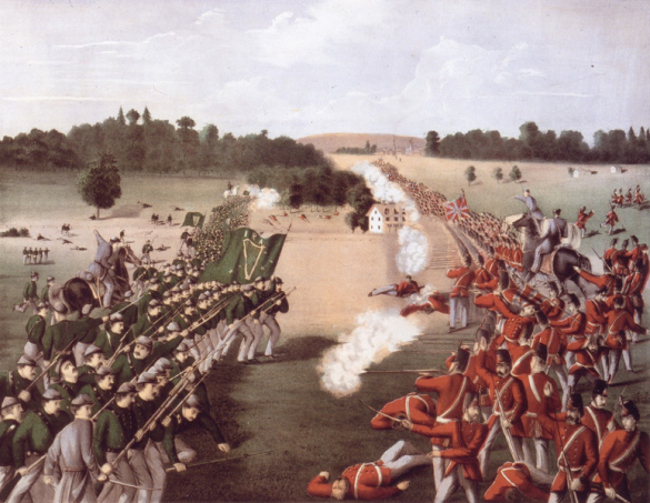 Malcolm McEachren and William Tempest were the first two to die in the battle on June 2, 1866. Both are considered to be the first two “Canadian casualties of war” (prior to this the subjects of Upper Canada were considered British citizens). The two men were buried with full military honours in the Necropolis.

William Fairbanks Tempest also happened to be the nephew of Colonel Silas B. Fairbanks, who immediately pushed for the formation of the 34th Ontario Regiment after the death of his nephew (officially formed 14 September 1866). It’s now referred to as The Ontario Regiment (RCAC) and has played an important role in Canada’s military history.

0 comments on “The Fenian Raids and the Necropolis”Add yours →