Everyone has heard of Niagara Falls; they are one of Canada’s biggest tourist draws and a frequent honeymoon destination for newlyweds. This post is NOT about the Niagara Falls, it is about Canada’s other waterfalls (that no one knows about): the Montmorency Falls.

Located in Québec, these chutes d’eau are not as wide… but are taller than Niagara (at 83-metres). They are downstream from Québec City and flow from the Montmorency River, over a steep cliff, and into the St. Lawrence.

Like most waterfalls around the world, Montmorency is the setting for many an interesting historical story about ghosts, tragedy, love and suicide. This story is of one tragedy that involves the suspension bridge that spans the length of the falls.

The suspension bridge you see today was a recent addition to the park, built-in 1993. The first bridge connecting Beauport to Boischatel was built in 1812. 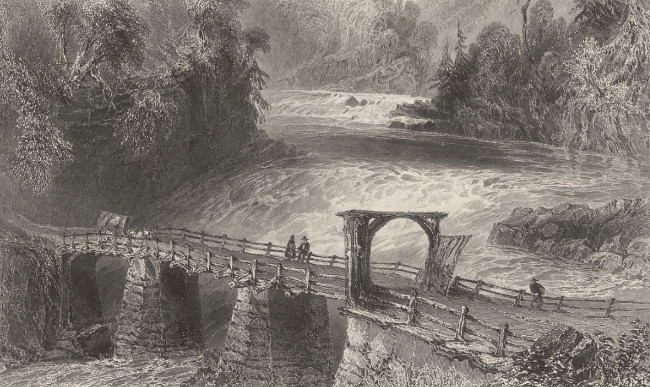 In order to accommodate an influx of tourists, the old bridge was replaced in April 1856 by a suspension bridge, one of the first in North America. It gave better views of the falls.

However, not five days after the opening of the bridge, the chains holding the bridge snapped and plunged three people 100-feet into the water and over the falls to their deaths: Louis Vézina, Ignace Côté, and his wife, Angélique Drouin.

The bodies were not immediately found (Louis Vézina’s body was found at the end of May) so assumptions were made about who died in the tragic event. Witness accounts were given like the one below given by Jacques Binet de Beauport:

[Translated from French] Jacques Binet, of Beauport, aged 15, being sworn deposed as follows: – I live with my father, Jean Baptiste Binet, in the said parish about two arpents from the Montmorency River, on the way to the old bridge. My father is a shopkeeper and sells bread. I remember that on the 30th of April, at about half-past eight in the morning, Louis Vezina came to our house to get a loaf of bread. I gave him two small breads instead of a big one and he went back to his father, Prisque Vézioa, where he lived. The old bridge road was blocked and there was no other way to cross the river than on the suspension bridge. It was at this time that the suspension bridge fell. It is publicly known that Louis Vézina was on the bridge during his fall and was dragged into the abyss. It might have been about a quarter of an hour since Louis Vezina had left our home when I heard that the bridge had fallen.

Another man, Louis Cloutier of Château-Richer, gave testimony of what he witnessed after Louis Vézina’s body was found in May. I mention this because the only reason Cloutier was able to do this is because of his horse.

Cloutier was about to step onto the bridge when his horse stopped and refused to move. Cloutier was trying to regain control when he looked towards a noise that he’d heard, and this is when the chains snapped and the entire bridge fell and rapidly disappeared over the precipice.

I hope he spent the rest of his life thanking his horse!

Records from the legal proceedings from the trial indicate that the entire bridge failure could have been prevented.

People testified that the bridge showed signs of stress and damage before it even opened, but bridge trustees refused to listen and closed the old bridge even though it was still in perfect working order. Officials wanted to encourage locals to use the new suspended bridge.

The most damning testimony came from Isaiah Toussaint, a 29-year-old carpenter who worked on the bridge project. The M. Walker that he repeatedly refers to below is Thomas Andrew Walker, a civil engineering contractor from Québec. I tried to find a link between this T.A. Walker and the civil engineer who built much of the railway infrastructure in Canada… but couldn’t confirm.

[Translated from French] As soon as the thaw began, I realized that the bridge was beginning to lean north and that every day it leaned a little more… one day on the 18th of April around five pm, while I was alone on the busy deck to put the boards … I heard a loud noise and I felt that the bridge had suffered a violent shock, and that the north side had dropped at least four pumice.

I called the two masons and after examining the bridge we saw that there were five broken iron bars in the second link of the chain, counting from above. … One of the masons immediately notified M Walker of the accident and the other mason and I took it upon ourselves to close the bridge to let no one pass …

… On the 23rd the bridge was opened at public the old bridge was closed. During this whole day we tried to raise the bridge. Due to some inconvenience in our hydraulic machines we could not lift the deck more than a few inches during the first days of this week. About this time I realized that another iron bar in the corner on the northwest side was broken.

On the 28th, on Monday, I warned one of the commissioners of the circumstance … Several times while we were on the bridge, the magazines we were putting under the chains to support the weight of the bridge slipped or missed and the bridge went down to this place with a violent shock … At that time there were four painters who worked on the bridge and during one of the shocks they told me that they feared that the bridge would fall … I warned Mr. Lemoine, one of the trustees, on the evening of the 29th that if we continued to work in this way at the bridge, the bridge was in great danger …

A year after the bridge collapse, a third bridge, not a suspension, was built to connect Beauport and Boischatel. Thomas Andrew Walker was charged with criminal negligence and was not involved in the construction.

Ironically, the suspension bridge that was built in 1993 (and you can walk across today) uses the original masonry pillars from 1856. Try not to think of that as you are walking across! 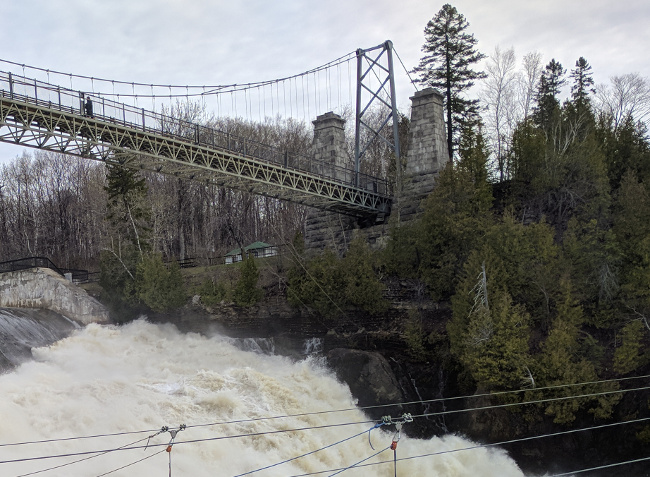