January 7th marks the 1-year anniversary of the attack on the Charlie Hebdo office in Paris; an attack that killed 12 people and wounded another 11. The killings spawned a worldwide movement to support freedom of speech and brought the magazine’s laïcité political satire into the limelight; rather ironically, the attacks bolstered the floundering magazine when it was about to close its doors because of financial difficulties.

In a day or two, the magazine will release a special edition marking the anniversary of the violence and feature cartoons by the five Charlie Hebdo artists who were killed in the shooting. 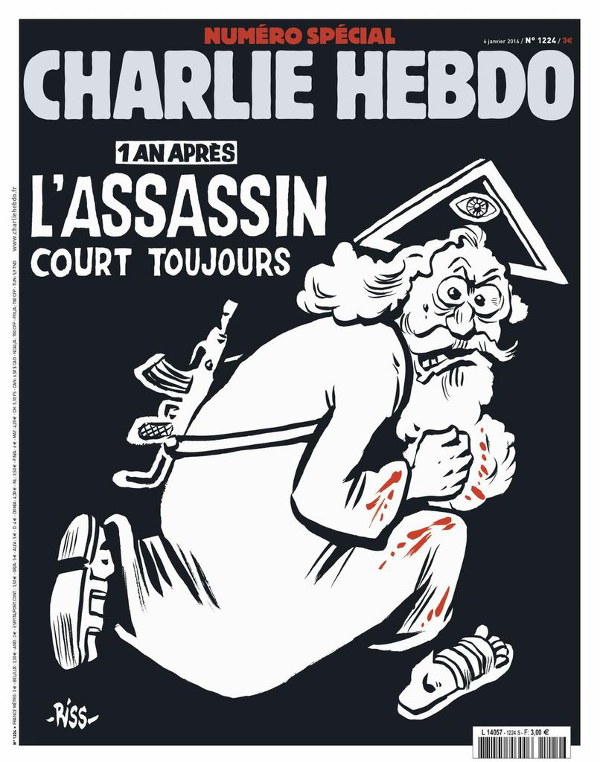 (Note: I read the cover as the assassin is always running away but have been told it means the shooter is still out there. Perhaps the two mean the same thing once you get past the literal language bit.)

The first time I saw the phrase Je suis Charlie was roughly a year ago in Los Angeles. It was a small sign attached to the back window of an Uber driven by a French woman who had just immigrated to California. Tu es Charlie? I asked as I got into the car, not yet making the connection to the attacks in Paris. Oui. Je suis Charlie. Tu es Charlie. Je me souviens de Charlie. Luckily, at this point I was doing daily French lessons and was able to connect the dots. A day later I saw a massive Je suis Charlie sign covering the entire side of a building on La Brea.

The U.S. and French constantly throw insults at each other; but, it was really heartwarming to see that the people of Los Angeles were very quick to support the French and denounce the attacks.

While in Paris, we saw very little Je suis Charlie. Even after a few weeks of wandering the city, it was only when we visited la Place de la République that we saw our first indications of defiance, outrage, and a push to maintain freedom of speech. And, after wandering for a few more blocks, we accidentally stumbled upon the offices of Charlie Hebdo, identifiable by the big men with automatic rifles protecting the entrance.

Across the street was a single small Je suis Charlie sign a shop window. The only free speech message on the street outside of the Place de la République.

It’s no surprise that the Place de la République has become a monument to defiance, it was built in honour of the French Revolution. After the attack on Charlie Hebdo, 1.6 million people packed into the square to support the magazine and the right to free speech… and after the November 2015 attacks it became a place for mourning and quickly filled with tributes to the victims.

On January 7th, I expect that the square to be overflowing with people.