This was an unplanned 11th-hour trip. These trips are the worst because they are inconvenient, expensive, and disruptive.

Because of the sudden unplanned-ness, I found myself commuting to the airport during LA’s deadlocked rush hour… feeling helpless because my flight kept constantly switching between “departing 90-minutes late” and “on-time departure” (after starting a meal planned around a 90-minutes late departure buffer).

As such, I spent 15-minutes of my life unmoving in traffic while my taxi tried to figure out the mess that is a left-hand turn from Hollywood onto Highland. The view here is very LA with pink 1950s buildings, palm trees, and blue sky. The other 45-minutes was spent creeping slowly towards Burbank airport knowing that my original flight time had passed. 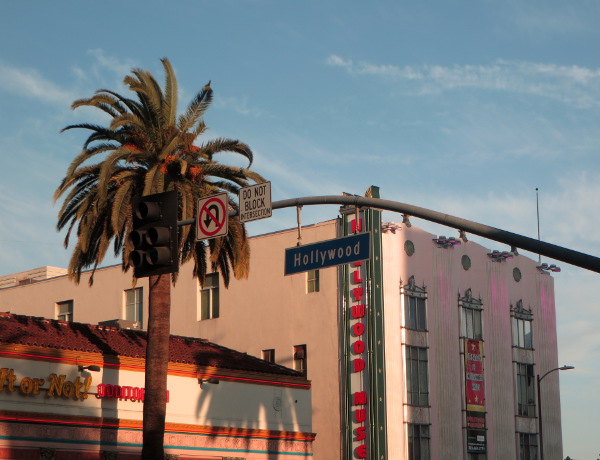 In the end, my flight was 150-minutes late… because the sky in SF wasn’t as blue as LA. In fact, there was nothing but a scary and demanding white blob named Karl surrounding the city. I guess I could have enjoyed that meal with a glass of wine. 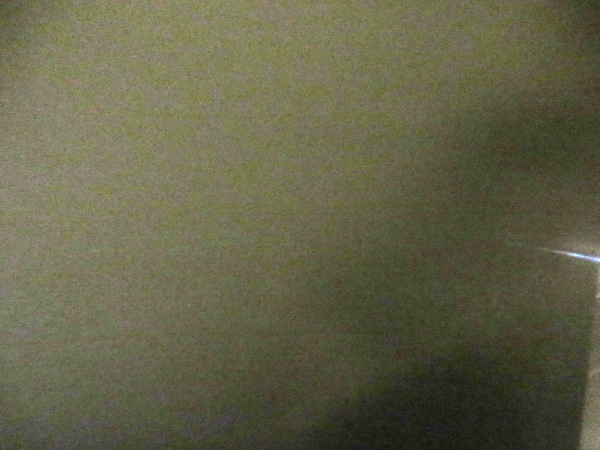 San Francisco feels somehow different to me now that I’ve worked in LA. Or perhaps it’s because I worked in the valley and not in the city, I didn’t have a chance to experience the daily vibe of the core. But waking up to SF felt different from what I’ve experienced in the past. It felt hip and buzzed with brainpower. 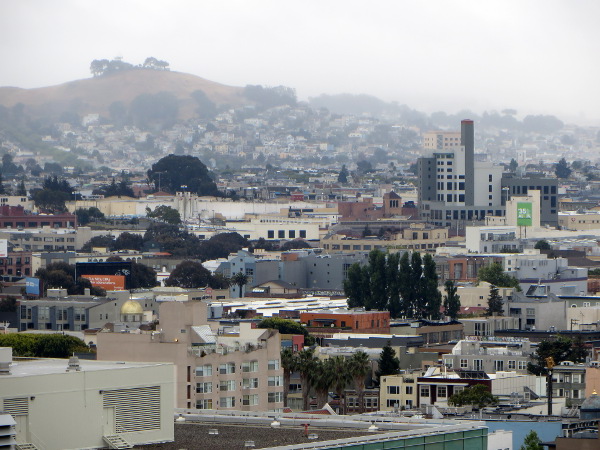 Breakfast was at The Grove. The cool thing about The Grove (besides the food) is listening to all the tech IPO and catty conversations going on around you. I learned more dirty laundry about the tech scene in an hour than I got in two years in Silicon Valley. 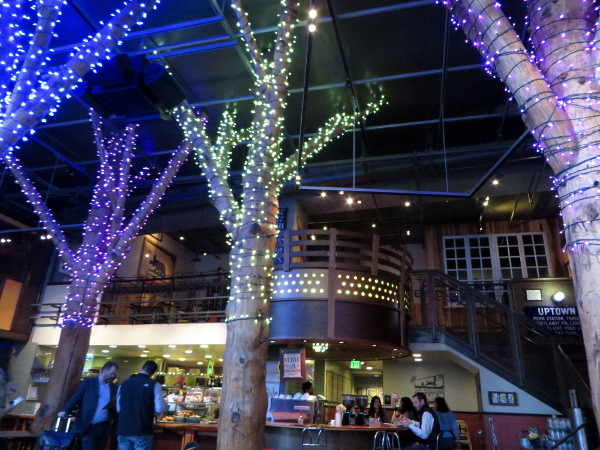 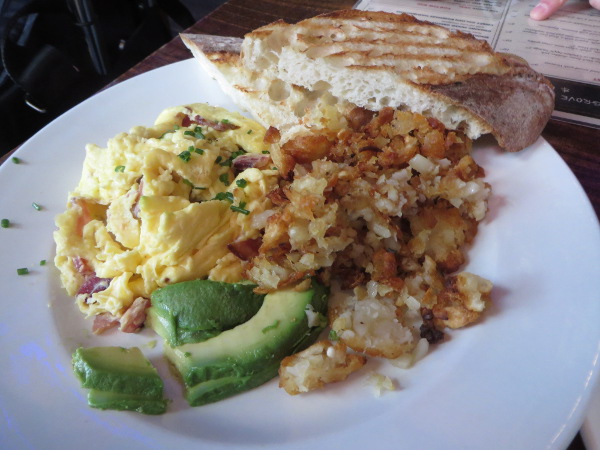 In keeping with the San Francisco tradition, the coffee at The Grove is rather meh. 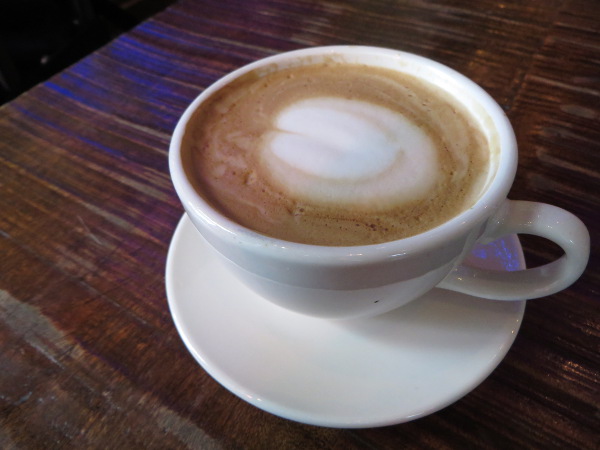 The rest of the day was spent on Market Street in a historical building called the Monadnock. Construction on the building began in 1906 but stopped suddenly with the San Francisco Earthquake and Fire. The nearly complete building was one of the ones slated for demolition in an attempt to save other buildings from the fire. But, the Army botched two attempts at destruction and because of this, I was able to briefly enjoy the Parisian style Beaux-Arts architecture and the San Francisco Renaissance mural in the lobby over a hundred+ years later. 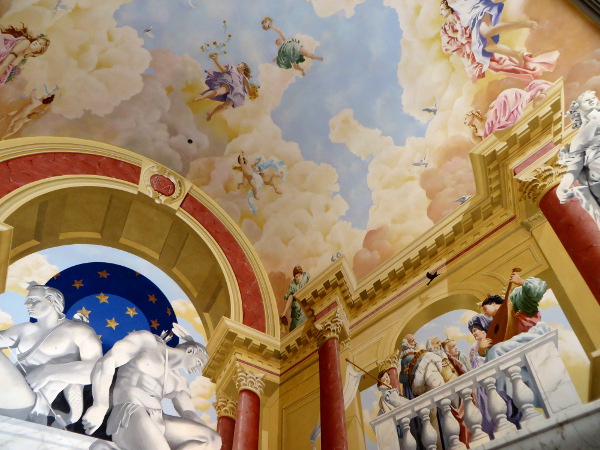 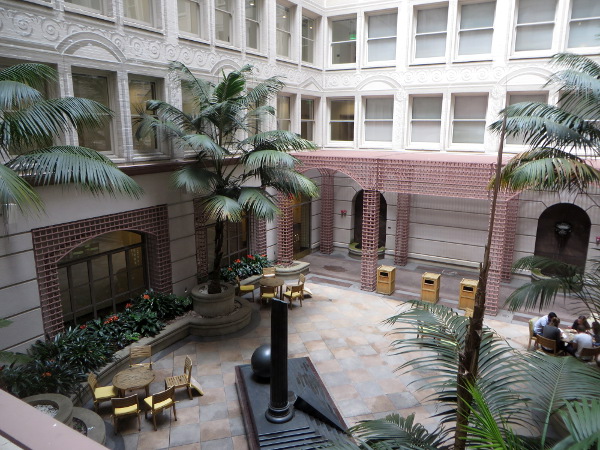 And, after a long day of facilitation… I was off to the airport… in transit.

In all the time I spent in San Francisco, I never once ever stepped on BART (Bay Area Rapid Transit). The Caltrain, yes. The MUNI, yes. But BART, never! So, when presented with the possibility of missing my flight because of insane traffic heading out of the city (the regular commute coupled with a long weekend), I had to learn transit fast.

I will say this, BART is not very user friendly. There are no audio stop announcements (that I could hear), there are no visual stop announcements (you’re stuck trying to see the platform signs as you pull up), there’s no map or map-like listing of stops in the stations (that I could find), and you can only pay for a ticket using a US debit card or cash (what about credit for travellers?). In fact, the entire experience is shrouded in mystery and confusion. 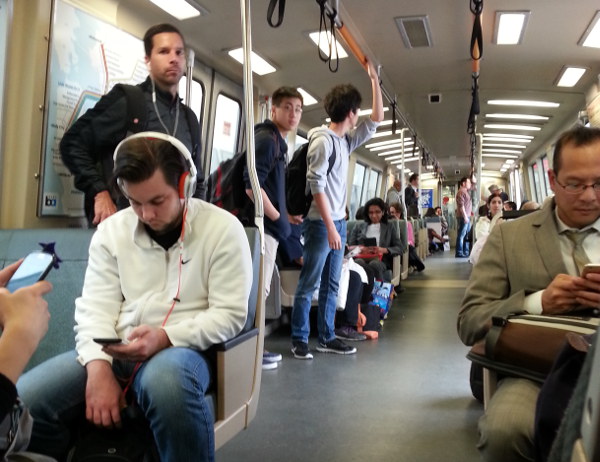 In the end, I conquered BART but almost missed my flight because it took so damn long.

Et voilà. It was a quick 24-hours in San Francisco and I’m sure we’ll meet again… hugs and kisses SF xoxo. Regardless of all the drama, you still feel like home to me.

0 comments on “24-Hours in San Francisco”Add yours →