The Hi Jolly Memorial is a popular roadside stop in Quartzsite for people travelling south through Arizona; the pyramid-shaped memorial shows up on all the “Roadside America,” “RoadTripper,” and road trip planning sites. I drove to the memorial and thought it would be a mere roadside attraction but was pleasantly surprised to discover an old pioneer cemetery… AND someone who had meticulously mapped out EVERY grave in the cemetery and put personal histories into a little brochure that you can grab at the gate.

I love it! I found a cemetery with a well-documented history. So, in honour of the person who took the time to put together this brochure (thank you whoever you are), I’ll include some of these histories in my post. 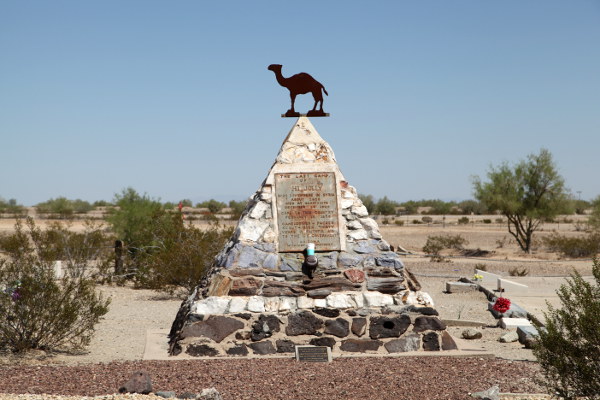 Hi Jolly’s real name was Hadji Ali. He was a Syrian born Greek ex-pat who travelled to Arizona to work as a camel driver for the Camel Corps on Lieutenant Edward Beale’s Expedition to survey and map a potential wagon route from Arizona to California. The pyramid reads: The Last Camp of HI JOLLY. Born somewhere in Syria about 1828, he died at Quartzsite on December 16, 1902. Came to this country on February 10, 1856. Camel driver — Packer — Scout — Over thirty years a faithful aid to the U.S. Government.

The Camel Corp was short-lived and the herd that Hi Jolly is associated with was eventually released into the desert to roam in the wild and fend for themselves. This in itself is a draw for tourists. It’s rumoured that the ashes of Hi Jolly’s favourite camel are incorporated into the memorial.

E.B. Ring and the Kuehn Family 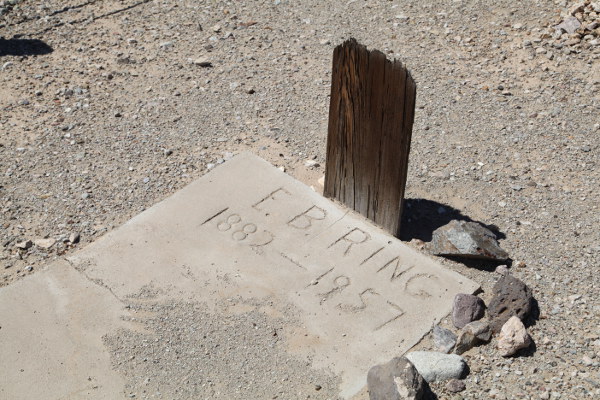 E.B. Ring was a placer miner at the Kuehn Plomosa Mine. He lived in a large tunnel in the mountains and was so kind that he refused to hurt even the smallest of creatures. He was close to the Kuehn family who owned the mine and looked after their property whenever they were away.

Viktoria Kuehn came to Arizona from Germany in 1893 with her three sons William, Charles, and Fred (born on the journey over). The boys grew up to become miners, businessmen, and Pony Express riders… though I’d question this last item because the Pony Express dates to the 1860s. It’s likely they were a part of the Mule/Jackass Mail network. 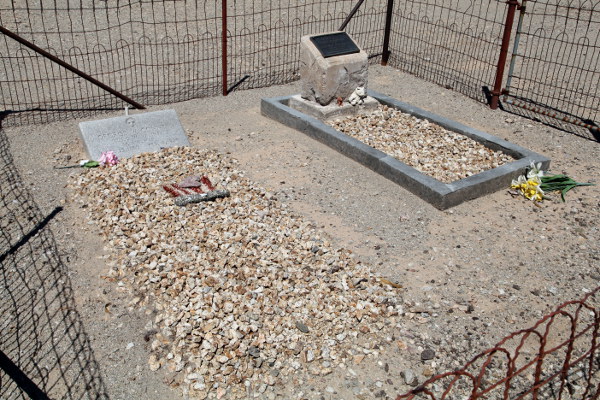 On the left is Buck Conner and next to him is his son, George. Buck was considered one of the town’s most colourful characters: actor, writer, pilot, minister, and a war veteran. He built the town’s airstrip and also The Little Church Beside the Road, which was built for George when he died of Froehlich Syndrome in1932 (4-years-old).

Both were initially buried in The Little Church Beside the Road) but, in 2008 the two bodies were exhumed and moved to the pioneer cemetery.

John B. Nash and Jack Moffatt 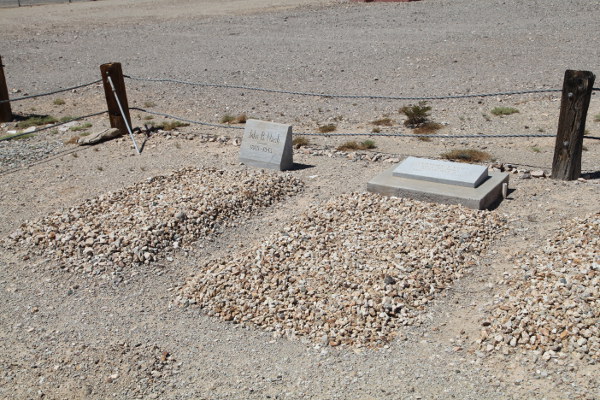 In the far corner of the cemetery are examples of the hazards of living in a mining town.

On the left is John B. Nash, who died of heat exhaustion and thirst in 1943.

A few feet away is Jack Moffatt who is the Canadian representation in the cemetery. In 1941, he had been in the town for only 15-days when he went on a drinking binge and then died of cold exposure (because deserts get cold at night).

I’ve seen this in every school/work event I’ve been too in Canada: some guy drinks a lot, proudly proclaims that he’s Canadian/a Maritimer/from the Prairies and can withstand any type of cold weather. He then goes outside in his shorts, a t-shirt, and flip flops and gets some sort of cold injury… every single time. Canadian’s are predictable and some things never ever change regardless of the era. 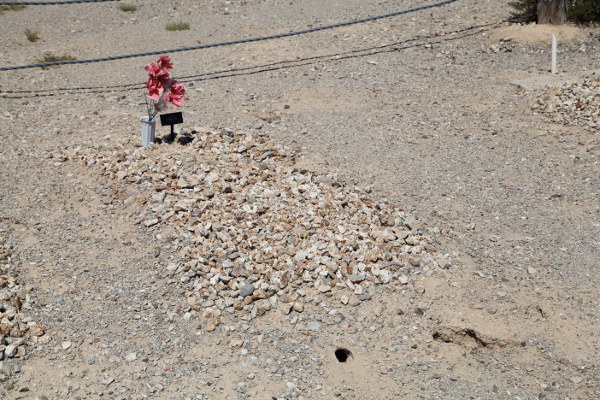 0 comments on “Hi Jolly Cemetery”Add yours →