The tiny and almost non-existent town of Cabazon appears rather suddenly as you whip down the I-10 from Palm Springs to Los Angeles. If you blink, you’ll miss the town, which is really a handful of restaurants, a gas station, and two very large dinosaurs.

We’d passed the dinosaurs before and not bothered to stop. But this time I needed a break from driving, and my phone was ringing and buzzing non-stop. Apparently, I had the wrong return date for the car and booked the wrong date for my hotel; so, I needed to make some calls.

The dinosaurs have names: Dinny and Mr. Rex. The former is a 150-foot-long Apatosaurus built in 1964 and the later a 65-foot-tall Tyrannosaurus Rex built in 1975. In the belly of the Apatosaurus is a gift shop that people flock to when it is open, but wasn’t open during my stop. Both creatures were built by Claude Bell, the same theme park artist who built structures at Knott’s Berry Farm.

The dinosaurs saw quite a bit of fame in the 80s and 90s. Of their appearances in commercials, music videos, and film, the most known of all of these is a guest appearance in Pee-Wee’s Big Adventure (1985). 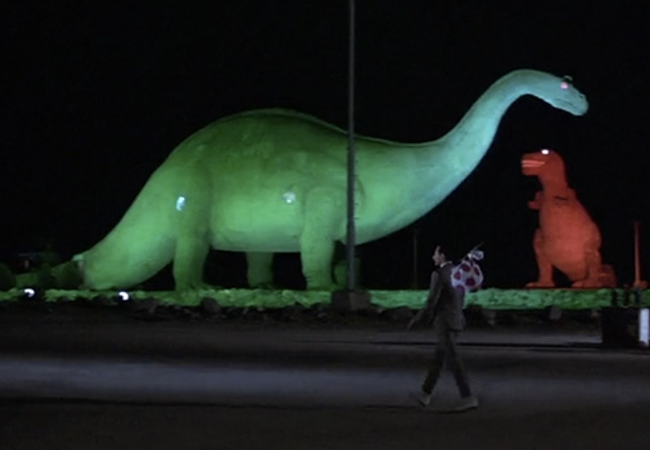 The photos of Pee Wee’s bike and suit are from the Hollywood Museum on Highland and Hollywood.

0 comments on “Dinny and Mr. Rex (the Cabazon Dinosaurs)”Add yours →