Remember the previous post on Lake Havasu, Arizona’s vacation destination and version of Daytona Beach? Well… Lake Havasu is the current inland destination for locals and travellers who are looking to having a bit of fun, do a bit of gambling, and enjoy the sun and water. But, before Lake Havasu, there was Bombay Beach on the Salton Sea: the accidental lake.

For most of its history, the Salton Sink was a salty, dry lake bed, which periodically filled with water during periods of heavy rainfall and flooding. But, evaporation quickly undid any of the flooding, and the area went back to its natural, dry, stinky, sandy, desert-like state.

However, in 1900, the California Development Company began to mess with the natural landscape and diverted water from the Colorado River into the Salton Sink using a series of man-made canals. The goal was to irrigate potential farmland that they planned to sell along the water’s edge. This worked well for a couple of years, but the problem with using the Colorado River as a water source is that it is full of silt, so with the diverted water came a lot of other materials that clogged the canals that led into the Salton Sea.

In 1905, as crews from the California Development Company battled this silt, they were hit by record rainfall, which flooded the Colorado River, blew out the canals, created a diversion channel, and deposited the entire contents of the Colorado River into the sink. This submerged existing towns and destroyed the Southern Pacific Railroad businesses in the area.

To make a really long story short, the California Government and Southern Pacific Railroad spent 2-years and a ton of money trying to plug the hole that caused the water to divert, the California Development Company was sued into oblivion, the Salton Sea was created, and California realized they needed a dam to control the flow of water in the Colorado River to prevent this from ever happening again.

Not all was lost, however. A newly created lake now sat in the middle of the Sonoran Desert and opportunists saw this as their chance to create an inland vacation destination to rival places like Palm Springs. In 1929, Bombay Beach was created as a private and exclusive retirement community and property prices soared. People came by the busload to buy lots.

In the 50s and 60s, the community was known as California’s French Riviera and attracted more tourists than Yosemite. The water was frequently full of boats and it was a prime destination for weekenders and celebrities like Frank Sinatra, Desi Arnaz, Sonny Bono, the Marx Brothers, Jerry Lewis, and the Beach Boys. Fishing fanatics came in droves to the Salton Sea, where there was the orangemouth corvina, a marine quality game fish, and tilapia thrived in abundance. 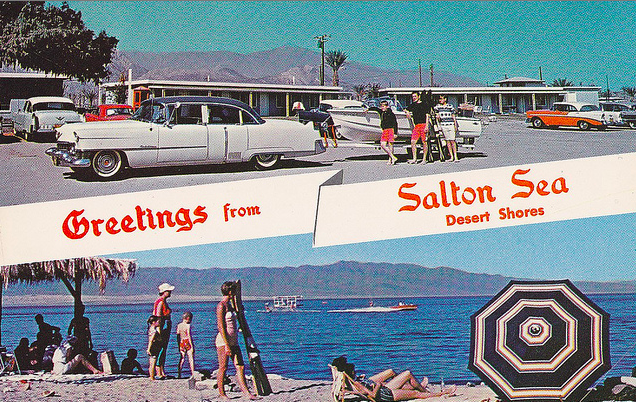 Remember the Government’s push to build a dam to control the amount of water that flows down Colorado River during periods of flooding? Well… these dams were built and cut off any means of getting fresh water into the lake to flush it out.

Remember those farms sold by the California Development Company? Well, the company may have disappeared, but the farms did not and for decades they dumped their farm waste and excess salty water into the sea. By the 1980s, the waste made the water so toxic and salty that fish and birds started to die off… by the millions… in 1994 7.6 million tilapia died… and the biological matter from this die-off caused the algae in the sea to bloom, which killed the birds.

And, the die-offs didn’t stop… it happens every summer. When you walk along the beach you can see dead fish floating in the water. The sand is actually not sand. As you walk you are stepping on the skeletal matter of generations of dead fish. The smell is atrocious. I used to work with dead bodies and can handle a lot of unpleasant smells, but when I first stepped out of the car to investigate… I gagged and couldn’t stop. It smells like death, sour socks, rotten fish, algae, poop, and some other unpleasant components that I don’t even want to try and identify. Think of every bad smell you know, put it in a blender, and breathe it in. This is what the Salton Sea smells like.

Then there is the flooding.

Dykes were built to combat the flooding from the fluctuating water levels but they only worked for half of the town and completely failed between 1976-1977 when two devastating tropical storms hit the Imperial Valley and brought massive amounts of rain and water to the town. Houses, restaurants, pubs, boats, and roads were all washed away. People in the town were told to evacuate… some did and others didn’t… but those who did leave left their belongings behind and never came back.

Because of this, Bombay Beach is known to photographers and videographers as California’s post-apocalyptic beach town and is often used in post-apocalyptic photoshoots, movies, TV shows, and documentaries. You can wander the streets and peek into houses to catch a glimpse of the 1970s amidst the destruction caused by flooding.

Keep in mind that people still live here. The population of the town is 295 (2010) and is rising because some families from L.A. have seen the benefit of leaving the poverty of the ghettos to raise their families in a small, cheap, gang-free community.

Want to visit Bombay Beach? There’s no hotel but some locals have put their places up for cheap on AirBnB. Want to buy a lot? You can buy one for $400. As one local put it, if you want to gamble, buy a lot. It’s no different from playing the lottery every month.

It might not be such a crazy idea. The Imperial Valley CDBG just did a massive clean-up of the town, a ton of money just went into re-building the Bombay Beach yacht club to make it a community hall and museum, farms have started to use ecologically friendly ways to dispose of their waste, and in 2016 there are plans to rehabilitate the infrastructure in the area. Bidding for the construction work opened in 2015.

There may still be hope for this small town.

0 comments on “Bombay Beach”Add yours →