There is only one time in my life where I thought I would die; where inside my head a little voice said, this is it… today is that day… the day that I die. Where you so completely let go of all control and put your hands into fate and hope for the best. It was in India. And now there are two times: this one is in Santa Cruz.

But the day didn’t start out that way… it started in Edmonton reeeaalllly early in the morning as I gelled La Niña‘s hair. I like those kinds of mornings. They are quiet and we get to bond and talk about synchro. Gelling isn’t hard but enough skill is needed to prevent pain. 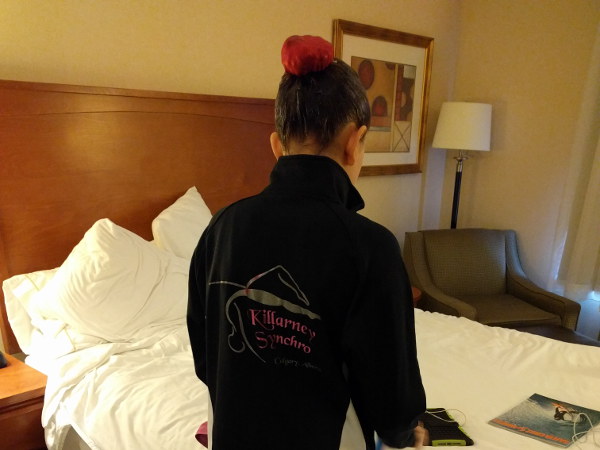 After all the gel had set, the early morning coffee was gone, and the girls swam their routine: I hopped in my Jeep and drove back to Calgary to catch my flight. For those who have never done the drive: it’s 3-hours long, flat, and full of good two-lane highway and green farms/cows/blue sky.

Arrival in San Francisco was delayed. Some of you frequent fliers may wonder why I’m flying into San Francisco and not San Jose (much closer to Santa Cruz). Well… even though San Jose’s airport has the word international in it, international does not include Canada. To fly to San Jose I need to fly through another US city (like San Francisco or Los Angeles or Denver) and add an additional 4-8 hours to my flight path. So, I opted to skip the second part of the flight and do the drive from SF (much faster).

Except it wasn’t me that was driving, it was an unnamed co-worker, because after a three-hour drive from Edmonton to Calgary and a delayed three-hour flight to San Francisco, I didn’t feel like driving so I asked my unnamed co-worker to wait for me so I could catch a ride.

In hindsight, I should have just booked a room in Sunnyvale or somewhere on the 101 and done the rest of the drive to Santa Cruz early in the morning. But I couldn’t predict that NorCal would be in the throes of a torrential rainstorm when I arrived; and, normally the drive is quite beautiful.

So, with my coworker, we started the journey from SFO to Santa Cruz. The rain made it nearly impossible to see out the front window of the car and large puddles of water meant we were hydroplaning frequently.

Me: “Are you ok with this? We can pull over and grab some food or something and wait for it to pass.”

Unnamed Co-worker: “I’m from Atlanta. I always drive in this kind of weather.”

Me: “How can you even see anything? I can’t see anything and the wipers are on high.” (Photo was taken not during the bad part but when I felt ok enough to release my death grip on the door handle.) 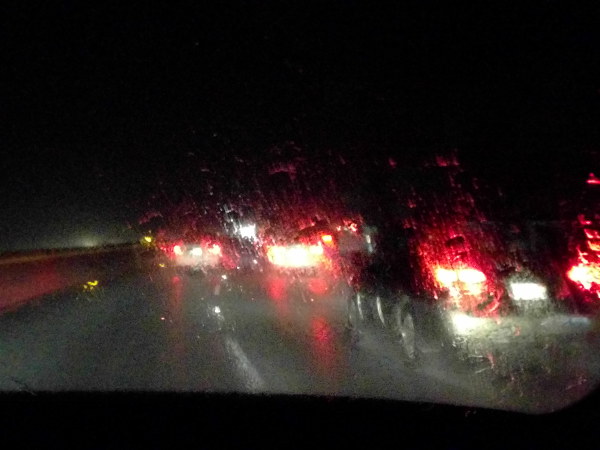 Unnamed Co-worker: “I don’t need to see. It’s all about mathematical angles. As long as there’s a trajectory and the lights work then I just need to predict the path and follow the angles.”

Me: “Ummmm. We’re on the 17. There are no angles on the 17… just winding turns and danger signs that we can’t see. And, puddles wider than this car.”

10-minutes of tense silence where I’m pretty sure we’re going to die. I wonder who is going to run the workshops if we both die.

Me: “Dude. Maybe you should drive in the lane away from the crumbling, sliding mud because the tires on this car are pretty tiny with no treads.”

I tell him the story of one of my friends who was driving across the Rockies and was hit by a rock slide. He lived but his insurance provider wouldn’t cover the damage to his car because he didn’t have rock slide insurance.

There are another few minutes of awkward silence and by this point, we’re getting pretty close to Santa Cruz and have to navigate the weird one-way streets to get to the hotel; and GPS takes us on the scenic route — but we can’t see anything.

There is a lot of relief when we finally get to the hotel.

The rooms are beachside and it looks like an ocean vomited up its contents onto the beach. The storm brought a lot of flooding and damage to the city, which we see the next day. I have so much adrenaline going through my veins that I doubt that I’ll ever sleep again. 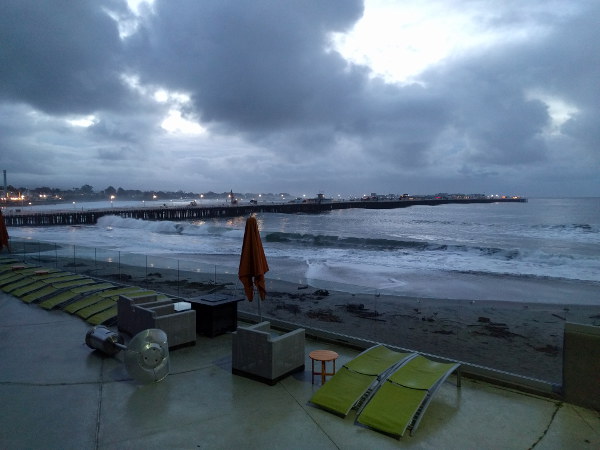 But, in California, the water disappears quickly and is dissipated by the sun. And, if anyone is happy about a storm it’s the surfers. Storm = great waves and they were out bright and early the next day.

0 comments on “The Storm that Rocked Santa Cruz”Add yours →