Remember all that construction that we started in May with the dramatic, tween-like, construction guys… well… where do I start? I’ll just jump into the explanatory rant. This company is an unprofessional joke.

We hired and paid Done Wright Contracting to come into our house to redo the bathrooms; totally green field. Over the course of 6-weeks, they repeatedly lied to us. They destroyed our bathrooms. They wrecked portions of our floors, doors, walls, and plumbing. They stole tools, construction materials, food, towels, money, and cleaning supplies. And, in an epic screaming match, stood on our front lawn and fought each other until one “partner” quit the company. We had neighbours come over / call to make sure we were ok because even people down the block could hear the epic screaming/swearing.

Two workers hurt themselves — one cut himself on a saw (they just built over the blood) and another blew out his knee in the first week of work and had to “take time off to heal.” Apparently, safety issues were not specific to our job because Darren (the company’s pretend owner — the “legal” owner of the company is his wife) was called away one day to resolve an OHS violation.

And, before we left Alberta, Darren started showing up at our house at the same time that La Niña came home from school. He left creepy, threatening, handwritten notes on tiny pieces of paper that he stuffed in the outdoor power outlet (wtf !??). This scared La Niña so much that we had her sleep at a friend’s/neighbour’s houses and would only come over to our house escorted when we weren’t there.

The best part of it all is that our house is now un-rentable and un-sellable. We had two impartial people come in and inspect the work (after we had Done Wright fix their mistakes) and both said the bathrooms are not only unsafe to use but it was completely sloppy work. One of these people now uses our bathrooms as an example of how not to do construction in classes that he teaches.

We didn’t randomly pick some company to do the work. We saved up for this, did our research and vetted this company with several others. They were not the cheapest (we had vastly different quotes) and they were reviewed highly on the TrustedPros website (which we no longer trust); they also came with good references. But, according to our lawyer and another friend (who faced similar issues with a different company), Alberta is like the wild west for construction and these sort of things happen all the time. There’s no regulation that protects consumers so it’s basically a free for all for construction companies to rip off consumers, make threats, and then hold their house hostage when they refuse to pay.

So, like the multitudes of other houses in Alberta, we turned it over to a management company and it now sits empty until we can recover financially and have it fixed (thanks Done Wrong Contracting). I believe in forgiveness and empathy, but these people make me feel only hatred and anger when I think of them.

Let’s give you a tour of twelve photos I took of cosmetic things AFTER those construction guys left to give you a taste of the quality of work and the level of professionalism. There is a separate stream for safety/code/structural damage that I’m not able to show at this point in time. 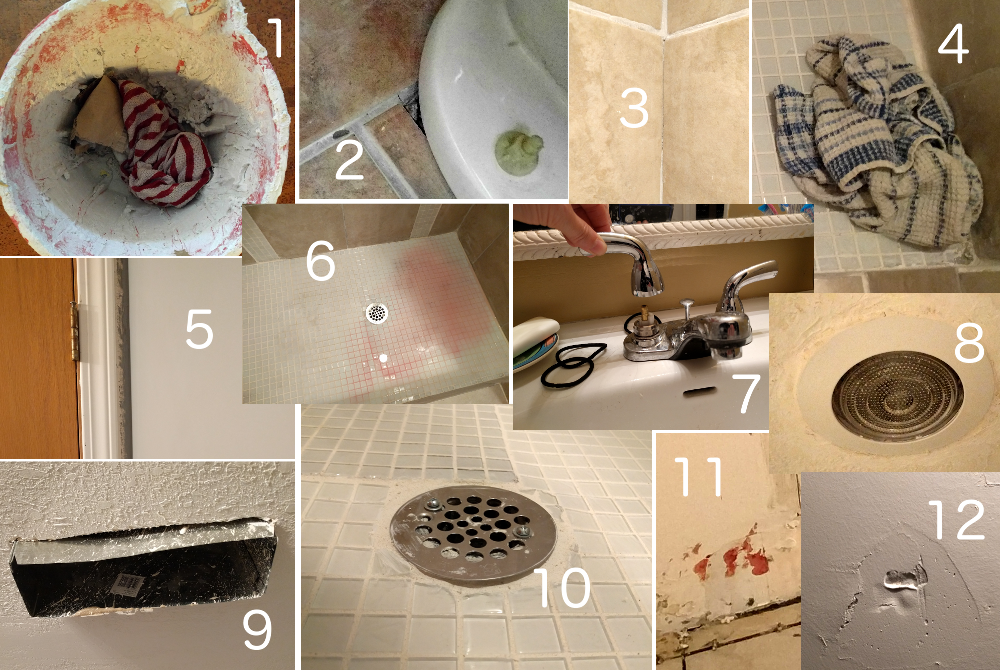 This is one of our cleaning buckets with a dishtowel in it. I discovered later that they simply dumped out the contents of the bucket onto the floor in the laundry room (and never cleaned it up) and then snagged the dishtowel from the kitchen when I wasn’t looking and used it as a rag. 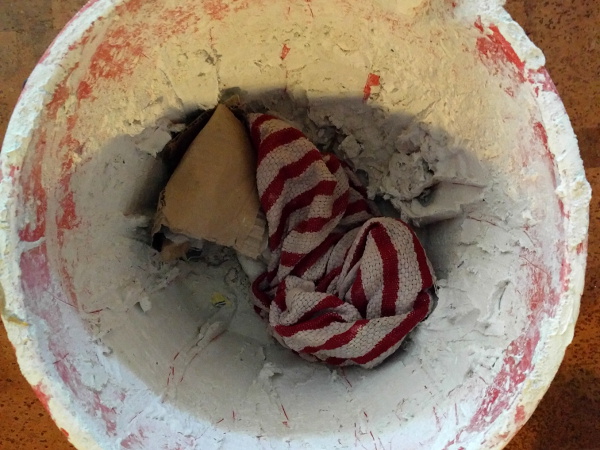 2. Hole in the Floor

Yep. There’s a hole in the “waterproofed” floor next to the tub and poking out from under the toilet (what could possibly go wrong here?). This could have easily been fixed by grout but they left it there… like they did the original flooring, which was supposed to be replaced. 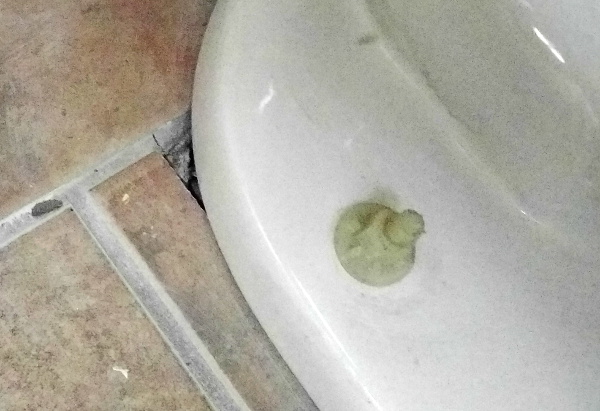 Beyond the fact that they used floor tiles on the walls, there is also no grout or caulking in spots (like the corners of the shower).

The other thing that galled me is when I asked why they were using two different colours for grout, I was told that “when it drys it will all be the same light grey.” Well, this was a lie because when it dried there was still white and grey. There was no colour changing happening. They “accidentally” used two different coloured grout. 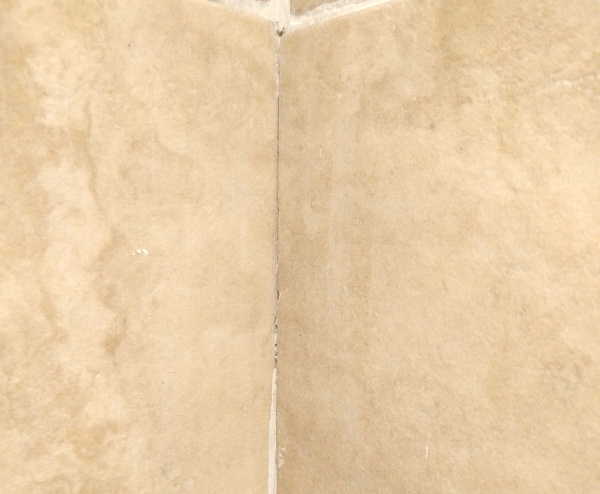 A pile of dishtowels that they took from the kitchen. Seems every time I replaced one they would take it and walk around with it over their shoulder or in their back pocket. Eventually, we hid all the towels. Then they started to steal rolls of paper towels. Why not simply supply your workers with a bag of rags? They’re less than $10. 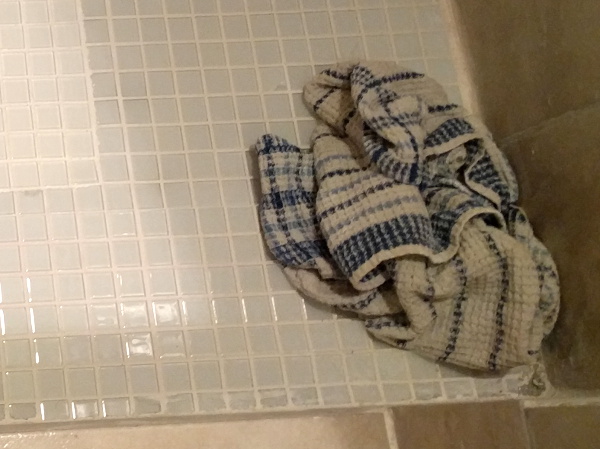 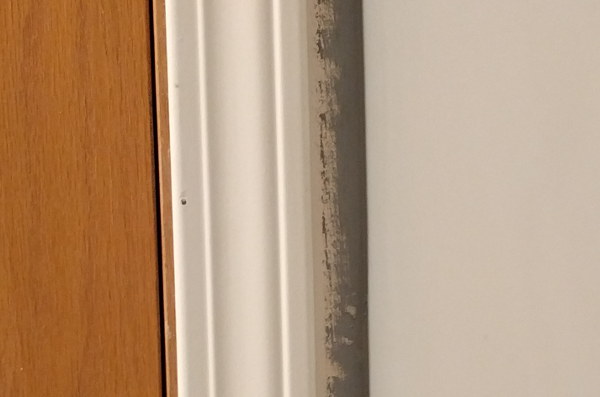 This isn’t blood (that’s photo #11) but food dye, which we used to figure out where the water was draining. As you can see, the water isn’t draining down the drain. The wavy pattern that you’re likely not able to see in the small photo is not a trick of the camera/light, it’s reality. The wall and floor tiling were as flat as recently unbraided hair. 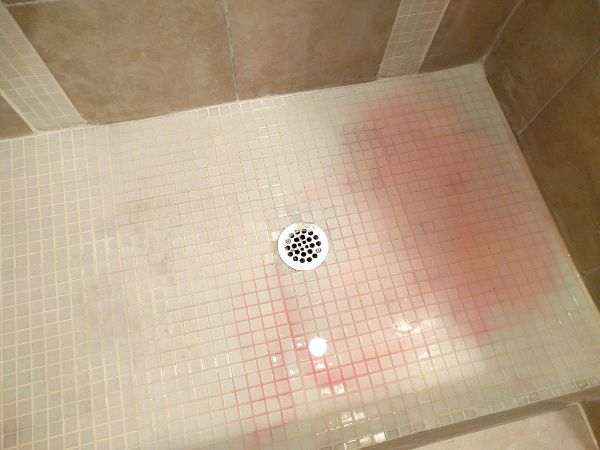 This one’s pretty self-explanatory. The handles weren’t even attached to the sink hardware. The one I don’t show is the upstairs shower/tub spigot, which was never attached to… well… anything. The only thing holding it to the wall was silicon. 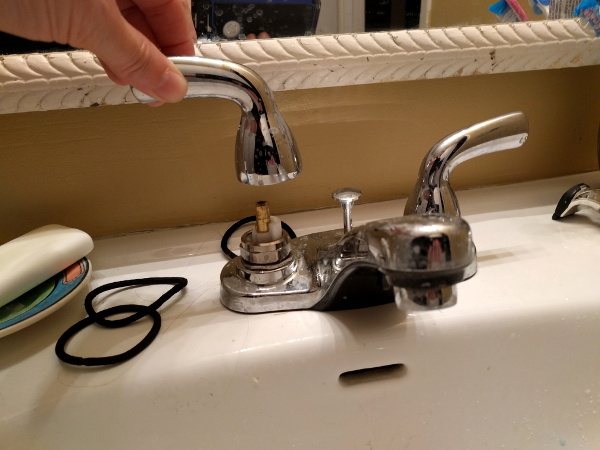 This is the ceiling light for the downstairs shower. We asked them to keep the old one because the sizing changes every year and they’re nearly impossible to find/fit year after a year. Once lost you’ll need an electrician to come in and fit a new one. We even set it aside when we noticed it was by a pile of garbage.

Well guess what, they lost it (even though we repeatedly said: please keep track of this because you won’t be able to replace it once it is gone). 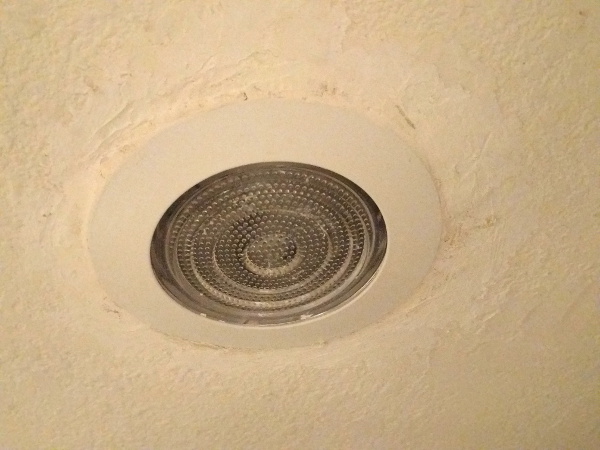 They put in a new one that didn’t fit properly and then tried to caulk it to the ceiling. The caulking fell apart in less than 24-hours and the light fell out (electrical hazard). Thinking we wouldn’t notice, they put it back in and spackled/mudded it to the ceiling. When I asked, “how do you change the light bulb,” they couldn’t give me an answer.

The other thing that really pissed me off is, I repeatedly said: “Please DO NOT stucco/texture the ceiling. It’s expensive and I hate stucco.” Guess what they did when we weren’t looking: they textured the ceiling in both the shower and the bathroom. Stucco in the shower makes no sense to me whatsoever. How do you even clean that?

Here is the ceiling ventilation opening, which the guys drywalled over and forgot about. When asked where it was, they denied it ever existed. After hounding them for days to cut a hole for ventilation because the bathroom gets cold, this is what they left behind. To add insult to injury, they broke the ceiling fan next to it. Note: the textured ceiling. 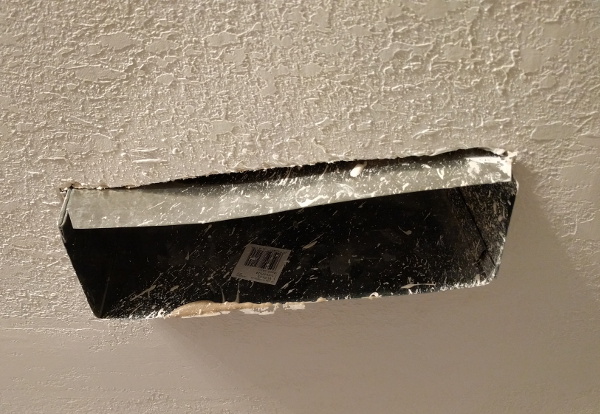 This is the “fixed” rendition of the shower pan in the shower. The shadow next to the drain is the 1-inch gap between the floor and the drain. The screws are random non-flat screws that Darren found because he somehow managed to lose the ones that went with the drain.

I’m sad to say that this was also the day that Darren walked out with my favourite screwdriver. 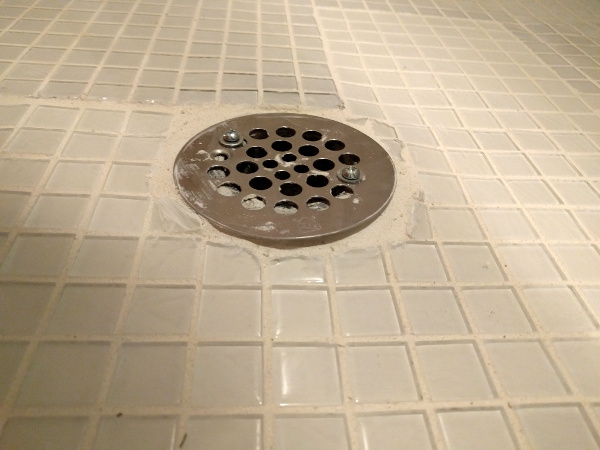 One of the guys cut his hand badly while using a saw and then left bloody handprints all over the main and shower walls. I initially didn’t photograph out of respect for this guy but later changed my mind. This is what was left AFTER they tried to hide it under drywall mud. 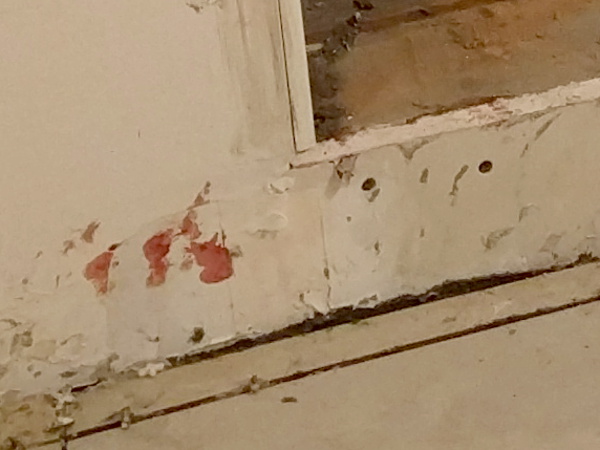 12. Random Hole in the Wall

I’m not sure where this hole in the wall in the basement came from but it appeared one day; maybe they were throwing things around in frustration (like they did upstairs). It appeared roughly around the time that Darren called is wife a “dirty fu**ing cu*t who never answers her phone” in front of La Niña (one of the contractors actually told him to watch his mouth). I know… professional.

There was an attempt to mud over it. Once dried, they simply painted over the un-sanded hole. This is the finished product. 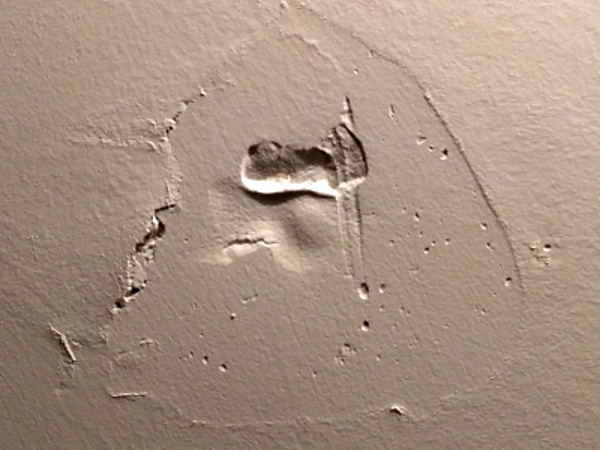 Phew. Now that we have all this negativity and anger out of the way (not really), I can start to write about all the driving that happened in June. The two biggest trips being driving across Canada and a drive across the Southern U.S.

0 comments on “Those Construction Guys”Add yours →