Edgar Allan Poe was once quoted saying about Boston: Their hotels are bad. Their pumpkin pies are delicious. Their poetry is not so good. And, I couldn’t agree more about the hotels.

It is really hard to book a room at a hotel in Boston; the fluctuating nightly costs (up to $800 a night), frequent blackouts/sold out weeks, and the whole concept of “prepay” for your room (with no flexibility) has driven me to try hotels all over the city.

What the pre-pay thing has done is it creates an artificial need in the market that drives business travellers to book months in advance, which means that unless you know your travel schedule a few months in advance you may be struggling to find a room. This also means that rooms fill faster and the price becomes abnormally high for the average tourist/visitor. And, companies shoulder the cost when changes are made to business bookings so there’s no incentive to stop.

In response, hotels give lower weekend rates, which drives the weekly rate even higher. When booking you need to look at the overall weekly cost and not the daily rate.

Honestly, this city is ready for an AirBB takeover. I had one Uber driver tell me that most tech workers stay in luxury apartments in the city because it is cheaper than hotels. 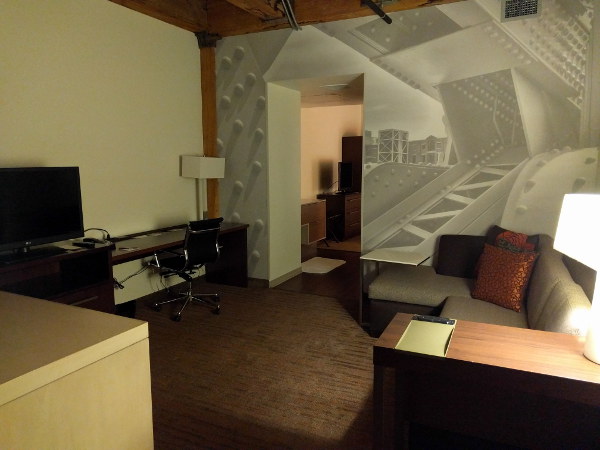 This Residence Inn is different from the standard brand look/feel. It has the feel of a boutique hotel; a boutique hotel with a history. The staff are lovely. The rooms are super nice, spacious, and clean. The location is in the Seaport district (2-min walk to the Children’s Museum) which is a vibrant, growing district filled with food, coffee shops, and lots to do.

For my stay, I arrived really late at night and the lady at the front desk was super nice. No issues here. But when I got to my room, I discovered that the carpet was soaking wet. Not wanting to cause a fuss because I knew the hotel was oversold (and because it was super late) I went to bed.

When I woke, my room was FREEZING… I could barely move I was shaking so much. To add insult to injury, there was no hot water. So, picture this: trying to have a cold shower as fast as possible, struggling to get dressed in a freezing room while completely numb, while standing on wet carpet. I’m pretty sure I entered the realm of hypothermia. It took me all morning in the sun to feel warm again.

Marriott is my favourite brand but unfortunately, this coupled with a payment fiasco and arrogant interaction with accounting means I won’t be staying at a Marriott in Boston. 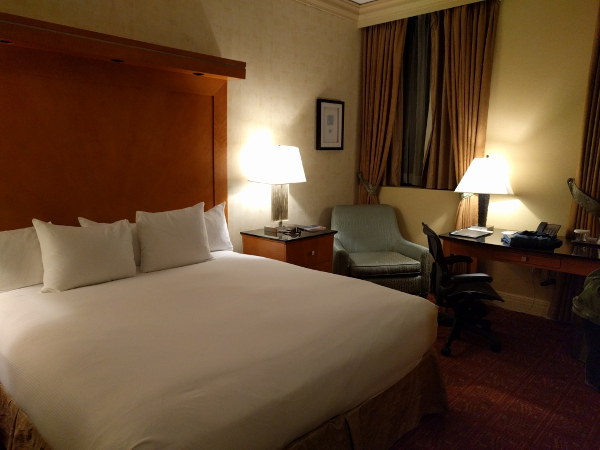 I stayed at this hotel twice because the rate is a consistent $299 and there’s none of that pre-pay-for-your-room-without-refund nonsense. It’s in a great, walkable location, the porters are friendly and helpful, and the lobby is gorgeous. It also has a history: the building is the 1928 Batterymarch Building.

But, there’s a reason the hotel is cheaper than all the others, it’s pretty rundown. For example, the second room I got was literally falling apart. The desk had been glued back together, there were holes in the bathroom walls, the tub didn’t drain, my 1980s phone clicked all night long and I couldn’t get it to turn off, and the bed kept coming loose from its rails. 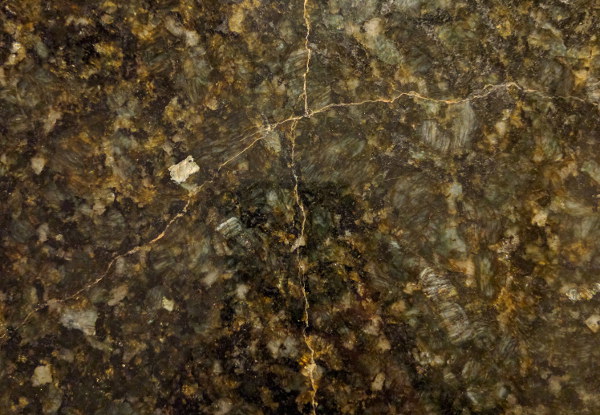 The eww factor at this hotel is also pretty high. There’s other people’s hair everywhere. I cleaned the bathroom for both of my stays because the tub, floor, and backs of doors all had a variety of different hair on them. 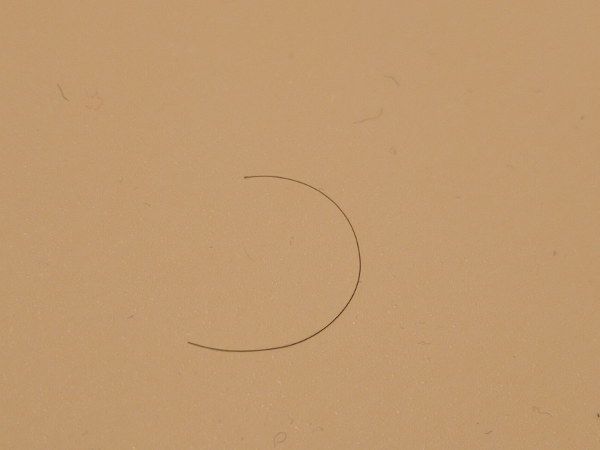 The sheets were clean but the carpet not. I wore shoes for the entire stay. Normally, I try not to care but there was hair everywhere.

Ok. So. Let’s start this off by saying… I didn’t book this hotel for myself. One of my coworkers booked it and I took over the booking when he was rolled off the project.

The building is interesting. It is round (hence the name the Roundhouse). Built by the Roxbury Gas Light Company in 1870, it was formerly a fuel storage building… for the coal gas used to light the street lamps in Boston. Later it was used as a movie theatre and then abandoned for 60-years. It was converted into a hotel in 2001. 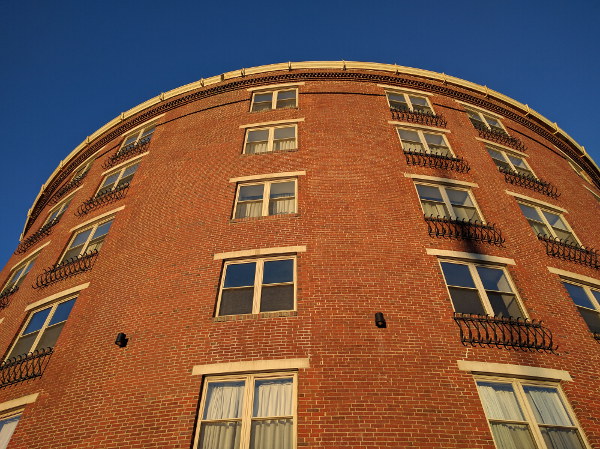 Inside the hotel is clean (it shone like diamonds compared to the Hilton). My room was very nice. The check-in staff were really wonderful, wonderful people. 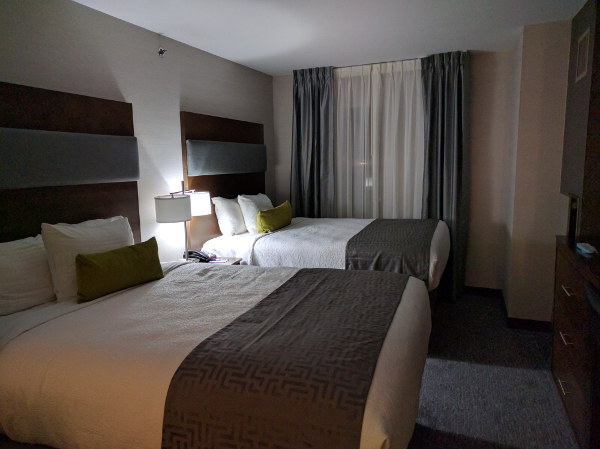 But, the hotel is in a really unfortunate location. It’s surrounded by some of the saddest sights that Boston has to offer: poverty, drug addiction, homelessness. I have a really hard time seeing people suffer and in this area, you get to see people experiencing various levels of hell. Addicts walk around like zombies… they sleep on the street… I saw one guy riding his bike pullover, fall over, struggle a bit before passing out.

Also, the trucking and bussing companies have their lots behind the hotel so expect a night full of beeping, revving, banging, clanking, screeching, and random noise. The sound of trucks does temporarily block out the sound of sirens, which is never-ending. The hotel supplies earplugs with each room but don’t expect to get a good nights sleep.

Best Western really downplays its location. It also doesn’t tell you that there are no restaurants around (other than the MacDonalds across the street… surrounded zombies… it feels like being in the middle of the zombie apocalypse) and that it’s nowhere near anything interesting in Boston. It’s a $10 Uber ride to downtown.

Personally, I will never stay at this hotel again. For anyone thinking of staying here: do NOT bring children to this hotel unless you are willing to have conversations about drugs, prostitution, and homelessness. 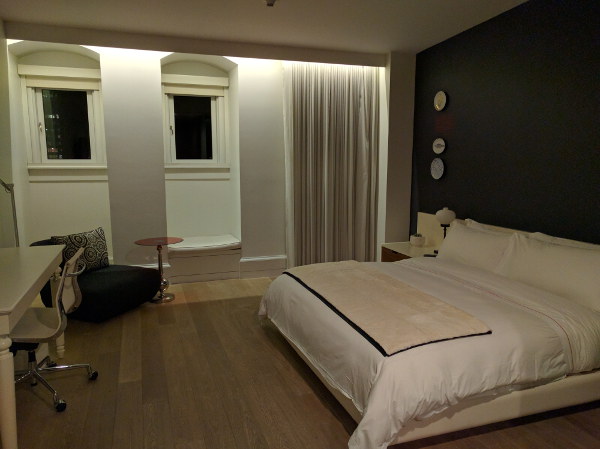 Soon to be a Hilton, I can see this boutique hotel knocking all other Hiltons off the map. It’s clean, it’s quiet, it’s in a great location, it has a historical back story, and it’s soon to have a free breakfast. What more can you ask for?

The hotel is named after Frederick Lothrop Ames, who was in his lifetime the richest man in Massachusetts. The family fortune was made in the shovel industry; and, when business was really good, they invested millions of dollars in the railway industry.

The hotel was paid for entirely by Ames and completed in 1889, just four years before his death. A plaque on the side of the building says this was once Boston’s tallest building. However, the internets dispute this claim.

It’s a shame that my project ended early because I would have liked to have spent more time in the Ames. There were a few other hotels on my reservation list: The Omni Parker House, the Revere Hotel, and the Battery Wharf Hotel. All of these came in at less than $1500 per week.