“Surprise is the best thing in life. It makes life exciting.” Otavio Pandolfo

My first encounter with the Os Gêmeos (Gustavo and Otavio Pandolfo) was in São Paulo in 2011. They worked with politicians in São Paulo to beautify the city by adding their giants to various locations. I remember just sitting in a tiny little square outside of a church and a McDonalds just pondering the little guy on the top of the giant’s head. 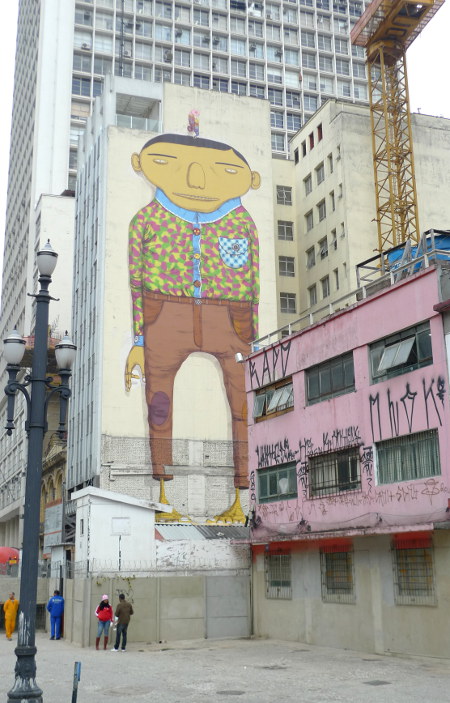 The twins have steadily been expanding their art globally and Boston is the first city in Massachusetts to invite the couple to artify the city. Works by the two have appeared in both California and New York since the early 2000s.

In Boston, it all started in August 2012 when the Institute of Contemporary Art invited them to be a part of their summer show. Two unique Gemeos works appeared in the city: a giant on the back of the Big Dig ventilation building facing Dewey Park (the “Big Dig” refers to the tunnels that Boston built under the harbour and this building provides fresh air to them). 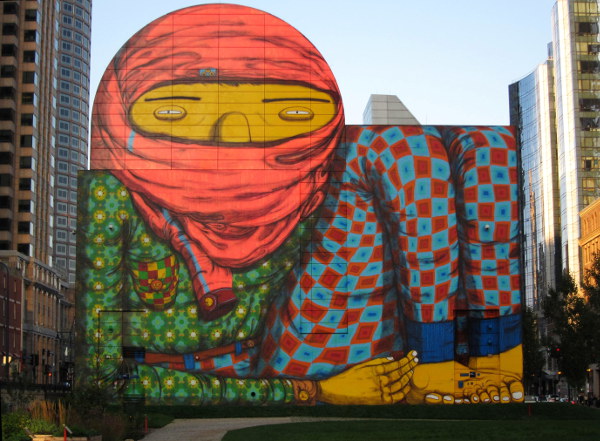 The piece was both controversial and well received. The immediate reaction from people who don’t know the Os Gêmeos style is to see a “ninja” giant as a “terrorist.” This in itself is a social commentary… to immediately be offended and upset when seeing a hidden face… and assume the worst.

The giant was always intended to be temporary and 18-months later, it was taken down and replaced with a big blue wall.

Other pieces appeared around town. The twins did a mural with local Boston graffiti artists/writers; at Mama Gina’s Pizza in Somerville across the street from the Brazilian market.

The one I stumbled upon is on the side of the Revere Hotel on Stuart Street (beside Cocoanut Grove Lane in Bay Village). It’s a self-portrait of them spray painting their name to the side of the building.

In one of my favourite interviews with the twins, they said that they work together as a unit. They just know each other’s thoughts and work as one artist instead of two. 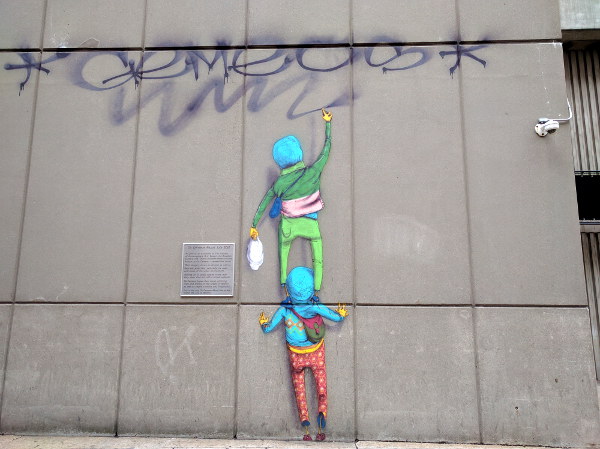 The thing that struck me is that neither work was defaced or coloured over by other artists/writers (other than one or two small tags that you can’t see from a distance). If this were a Banksy it would have lasted no more than a few hours before someone else toyed or tagged over it… or carted it away. 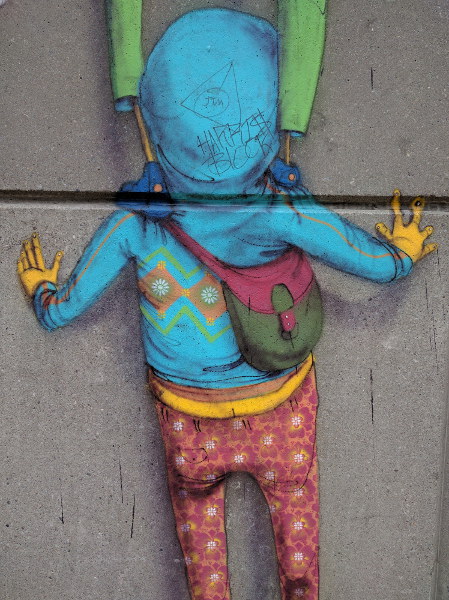 It seems that Os Gêmeos have a lot of respect. It’s 4-years later and their artwork on the side of the Revere Hotel: still intact and uncovered. The only difference is that now there is a plaque telling you about the artists.

0 comments on “The unexpected discovery of Os Gêmeos”Add yours →