The next stop on the underground exploration tour was the large and cavernous Catacombe di San Gennaro.

The third dimension of this is if you visit the monastery and tombs at the Santa Chiara, you get a discount on tickets at either San Gennaro or San Gaudioso.

If I were to do the day all over again, I would have followed the map of the Holy Mile, which tracks San Gennaro (the principal and most popular Patron Saint of Napoli) through the Rione Sanità community.

And, here’s a final tip: these tours can be packed during the busy season (upwards of 80-people per tour). However, during the low season (November/December) not so much. There were two people on my tour (counting myself), which expanded to 4-people when two people joined late. It made wandering the massive catacombs an extremely relaxing experience.

The San Gennaro referred to in the name of the tomb is the martyr Januarius I of Benevento who was born some time in the 3rd century AD. Not much is known or written about his life other than he was the first Bishop of Benevento and is thought to have been beheaded during the Diocletianic Persecution (Great Persecution/305). He was venerated by Rome as San Gennaro for hiding Christians from Emperor Diocletian during the Great Persecution.

San Gennaro was once buried in the lower catacombs in a simple tomb that people flocked to daily for prayers; the upper catacombs built up around him because people wanted to be buried next to the adored saint. 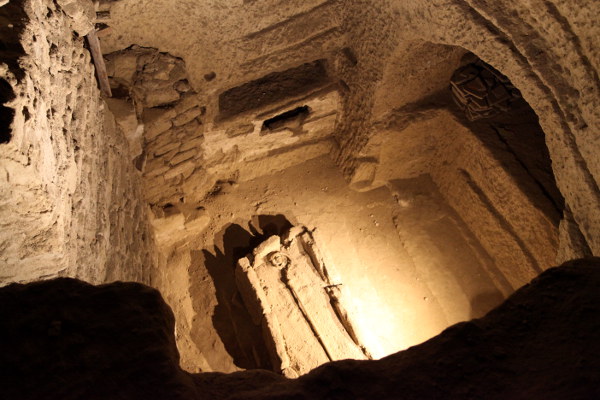 But Januarius wasn’t the first patron saint buried in the San Gennaro tomb; St. Agrippinus, the Bishop of Napoli, arrived first. His tomb is in a simple nave carved out of stone with an altar in the middle. To this day, people still use this space for small ceremonies.

Some of the earliest Christian paintings in Italy come from this part of the catacombs; including an early depiction of Adam and Eve; and, an ornate painted ceiling depicting Jesus.

The remains of Januarius and St. Agrippinus are no longer enshrined in the tomb; both were moved to a handful of locations before finally settling in the Napoli Cathedral (Cattedrale di San Gennaro).

In the early ninth century, the body of Januarius was removed from the catacombs by Sico of Benevento, who attempted to invade Napoli. He was not successful in the invasion and instead settled with taking the body of Januarius (minus the head) back to Januarius’s home town of Benevento (9th century). Hundreds of years later, the body was moved to the Abbatia Territorialis Montisvirginis and then to the Cattedrale di San Gennaro. The body was finally reunited with the head in the late 15th century.

All other remains in the catacombs were supposedly moved to a cemetery after Napoleon’s conquest of the city in 1806, but in my wanderings, I still saw large pieces of bone and fragments littered throughout the tomb.

The Januarius story doesn’t end with the catacombs. Remember way back in 2010 when I visited Belgium for Easter? One of the highlights of that trip was seeing a vial that contained the blood of Jesus… blood that had re-liquified every Friday for centuries before eventually stopping.

Well… after the beheading of Januarius, a local woman named Eusebio filled several vials full of his blood. These vials still exist and during the annual celebration of San Gennaro they are brought forward to the faithful so they can see the re-liquefication of the blood. If the blood does not re-liquefy, then disaster will befall on Napoli; so far, the blood has been 100% correct in its predictions for the year and in those years where it does not re-animate disaster strikes. The blood even blessed and re-liquified for the new Pope during a special visit.

Researchers cannot explain the phenomenon. They’ve tried to naysay and regardless of all the science and testing that’s been thrown at the blood, it can’t be determined why it liquifies at certain times. For more, check out The Blood Miracle of Saint Januarius.

0 comments on “The martyr, the catacombs, and the blood mystery”Add yours →