You can see the castle from just about everywhere in Napoli. It was one of the first things we saw from the hotel (and were curious about). In the Bourne Supremacy Napoli scenes, the castle appears looming in the distance in just about every outdoor shot.

There are actually two structures that you need to tease out in the photo below: Castel Sant’Elmo and Certosa di San Martino. The monastery is the pale structure on the right. The castle is stone grey and is poking out from behind the monastery. 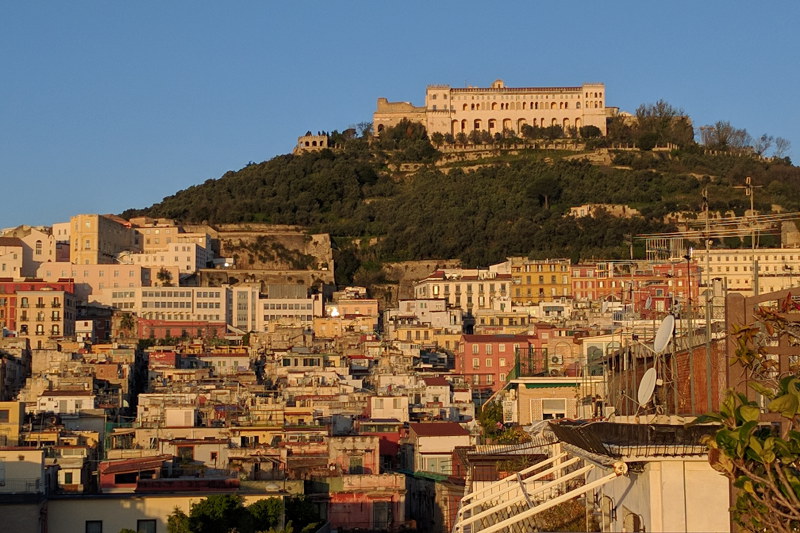 One of my co-workers planned his runs so the midpoint was at the castle. Two days later I would hike through the Spanish Quarter in search of the castle walls because I was so curious about the building. You can wander around on the walls; it’s 6€ to get in and they only take cash.

In writing about Napoli, I’ve given glimpses of the city’s French history (also here), it’s Christian legacy (also here), and, it’s Greek and Italian history. The five point hexagonal star structure that you see on the hill today comes from the Napoli’s Spanish occupation, which began in 1501.

I’d argue that it’s likely that there’s been a structure on that hill for as long as there have been people. From the peak you can see all routes into the city; this makes it easy to protect. The last non-Spanish structure on the hill was severely damaged during an earthquake. As such, in 1537 the current structure began construction. The two-headed eagle insignia over the entrance to the castle dates to this period.

It’s a miracle that the structure wasn’t destroyed in World War II during heavy Allied carpet bombings that lasted years. It stands out like a beacon in the middle of the city. The intensity of the siege was only matched by the importance of the Napoli ports to both Allied troops and Nazis because of their centralized location between the Middle East, Africa, and Europe.

The Nazis had long occupied the city and remained there until September 3, 1943, when the Italians signed the Armistice of Cassibile and joined Allied forces. On the way out of the city, Nazis destroyed communications towers, what was left of the ports and had strict orders to destroy the Castel Sant’Elmo. But, for some reason, they didn’t.

Castle Saint Elmo is a rather unassuming place to wander; there’s not a lot left to see that hasn’t been converted into an office or artistic space. Probably the best thing about it is the view of Napoli and the surrounding countryside.

0 comments on “Castel Sant’Elmo”Add yours →