Note: The backstory of the Finding Max series can be found on the Remembrance page.

All of the assumptions made below are based on probability. There is always the chance that Max could be anywhere in the graveyard… or not even in the graveyard; this is the truth that the CWGC and researchers face constantly: that they simply don’t know who the unknowns are. DNA is the only real identifier.

But, based on probability, I’ve uncovered a few interesting patterns.

Firstly, the graveyard contains only Canadians and British men. I did not find any other nationalities listed in the records. There are roughly 70% British and 30% Canadians sprinkled throughout. During reburials, a few smaller Canadian cemeteries were moved to this location; these men are mostly identified and in unified locations.

Secondly, one immediate observation is that soldiers were buried vertically rather than in rows (visitors walk the cemetery in rows). So, columns of men (1-10 / 11-20 / 21-30) were buried together rather than rows of men (A-K).

Thirdly, the “original” burial area from the Battle of Arleux (“VI K”) that is listed on the informational sign is misleading. There are a few “original” areas starting with the “I” section of the cemetery. Most of the men in “I” and “VI K” are known. Another area (“III”) has a large concentration of men who died in April and May 1917… and then there is a sprinkling throughout the rest of the cemetery.

I’m assuming that the areas that are symmetrical and well ordered were created during reburials; and, section “I” and “VI K” were left in a random pattern because those men were already known.

Where are the unknown Canadians buried? 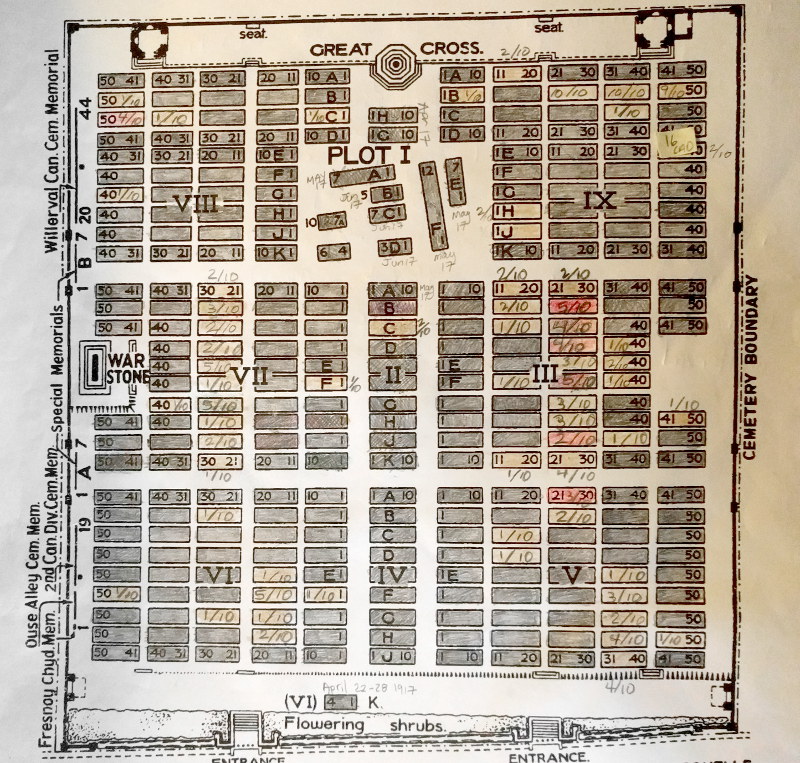 In the photo above, grey coloured boxes indicate areas where no Canadians are buried… or all the graves are known. I ignored these areas.

Yellow indicates areas of unidentified Canadians who are not likely soldiers from the 10th Battalion, who were grouped with men who died much later in the war, and who did not die at Arleux. Each box contains 10-men. The number on the box indicates how many of the 10-men are known as Canadian (e.g. 2/10 means two men are known Canadians).

Red indicates groupings of unknown men from the 10th Battalion who are buried among those who died on April 28th, 1917 at Arleux.

Breakdown by details and dates

I went through all the reburial records and headstone reports for the cemetery (yes… all of the records) and grouped areas by kinship (nationality, battles, battalions) and date. After all the dust settled, there is one grouping of soldiers (in orange) that likely contains Max. This is based on the probability that like were buried with like (e.g. men who died together were buried together). From what I’ve seen in known records, this assumption was true. 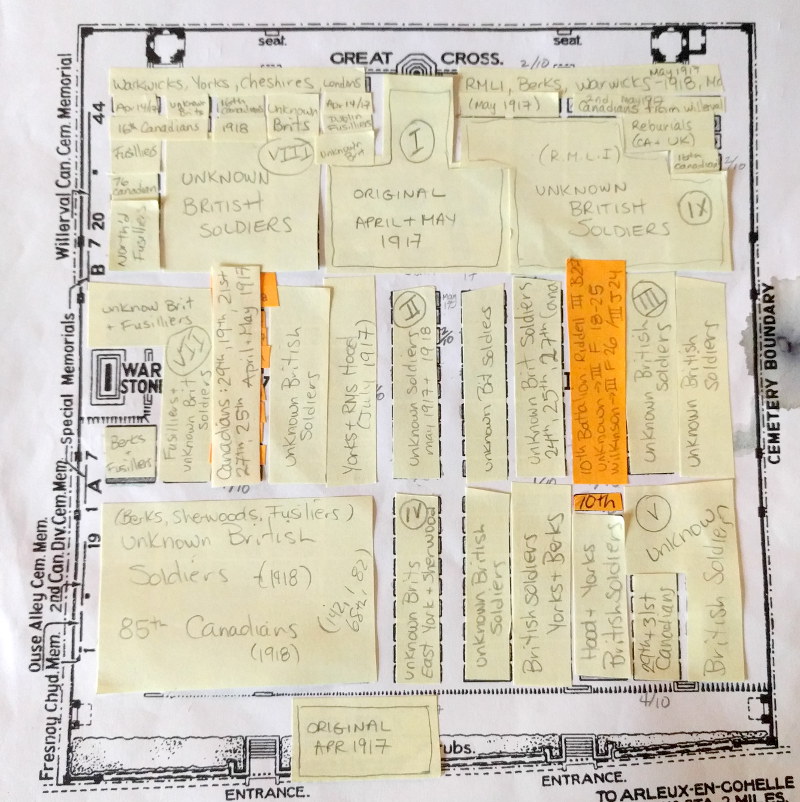 The orange area contains soldiers from the 10th battalion who died on April 28th, 1917. From this grouping, I was able to identify three men from the reports.

This leaves a handful of men from this grouping who are unidentified.

The next step is to track down old Belgian maps from World War 1 and map reburial Lat/Long records to areas where the bodies were found. I’m working on a scatter map.

Another trip to the archives will hopefully tell me which platoon Max was in (A, B, C or D)… so I can determine where he would likely have been when he died. If the stars all line-up, we may get close to making a match based on probability.

15 comments on “Who is buried in the Orchard Dump Cemetery? (a.k.a. Finding Max)”Add yours →