The windmill and miller’s house stand quietly on a lonely corner of the island overlooking the Baie de Vaudreuil, Senneville, and Sainte-Anne-de-Bellevue. It dates to the era of Charles le Moyne de Longueuil et de Châteauguay (from this post)… maybe. The dates of the windmill’s origin conflict wildly.

One of the most comprehensive research essays about the moulin à vent on the interwebs is found here; and, the author presents compelling historical evidence that the windmill existed prior to 1707.

The land was purchased in 1684 by Charles le Moyne (Benigne Basset Registry) from François-Marie Perrot, the original seigneury. Unfortunately, Le Moyne died a year later and upon his death, the land passed to his sons, most likely Paul le Moyne, Sieur de Maricourt whose name appears in legal records.

Up until this point, there is no evidence that Charles le Moyne used the land for anything other than military training. But, after the sale, in order to appease the French government, it was required that the new seigneury build a mill on the land to act as a gun tower, lighthouse, to attract settlers, and to grind grain after the harvest. This became critical after the Lachine massacre in 1689.

Some records show that Le Moyne hired a master carpenter… and a mill builder from Senneville in 1686.

After the family sold the land to le seigneur Joseph Trottier Sieur Des Ruisseaux in 1707 there is more concrete evidence of a windmill (inventories, sales, payment to a carpenter, etc). This could account for the discrepancies in the dates. But, there is a question over whether Trottier built the mill or renovated a mill. Some records hint that there were two mills.

Regardless, the Moulin de l’Île-Perrot is perhaps one of the more researched, preserved, documented, polished of them all. The land is privately owned and you have to pay to enter the parc historique de la Pointe-du-Moulin (May to November only). You can hike and walk around the site free of charge… but finding a place to park a vehicle is difficult.

During a drive around l’Île-Perrot, I kept wondering why is there only one windmill and why was so far away from the rest of the community… a community that is built along a windy waterfront. I didn’t find an answer to my question but I did find another undocumented windmill. 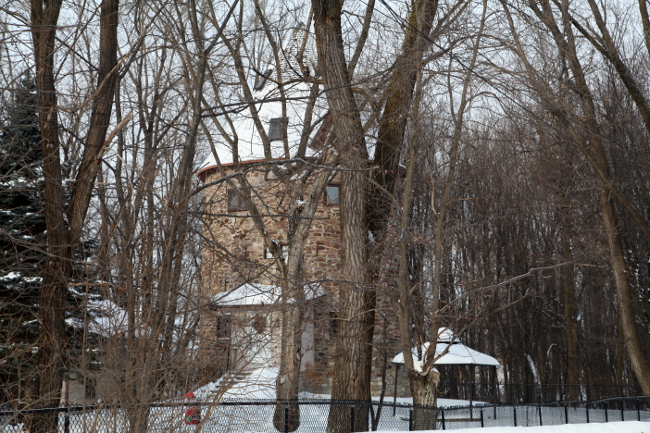 Meet the Moulin à vent d’Arvor-Vack. This is a private residence built in 1954 using the stones from a historic windmill from Vaudreuil (1767 or 1778). This re-creation was the handiwork of Lieutenant-Colonel Roger Maillet… a World War 1 veteran, Francophone journalist, and well-known personality from the L’Arche artistic era (1920s & 1930s). His wife was Corinne Dupuis-Maillet, an artist and recipient of the Order of Canada (1973).

The windmill was part of a larger Île-Perrot estate (also called l’Arche). Over the years, the Maillet couple collected bits and pieces of historic buildings (e.g. the Windsor Hotel and an archway from the Pied-du-Courant prison) and incorporated them into their property.

The windmill was purchased for $100 and moved to Île-Perrot stone by stone. It’s the only remaining building from the original Maillet estate, which burned in 1965. Sadly, the Québec historical society does not recognize the building as a historical property because it is out of situ and therefore not considered authentic.

However, I would argue that its story and ownership by an influential, well known, eccentric Québec couple makes it more authentic and interesting than the windmill park. I rather enjoyed researching the Moulin à vent d’Arvor-Vack.