In Hartland, a small town in New Brunswick with a population of less than 950-people, there is a covered bridge that is 1,282 feet long. Essentially, the bridge is longer than the number of people that live in the town (to be fair: this is the longest covered bridge in the world).

The bridge has one lane, which means people need to wait at either end and yield to cars that are already inside. This isn’t as stressful as it sounds. The locals are patient and observant; and, everyone seems to understand the rules of crossing. I did wonder, however, if all hell breaks loose during tourist season… or if any RVs ever get stuck somewhere in the bridge (or at the entrance).

A Google search yielded no results to that question… though two years ago the bridge was damaged by a plow.

So much government outrage

Throughout its 117-year old history, the bridge has been a source of pride, drama, and outrage for both locals and officials.

The original justification for building the bridge comes from a variety of different places: convenience, safety, and envy (Woodstock and Florenceville both had newly built bridges). From the April 7, 1899 edition of the St. John Daily Sun:

“The necessity for a bridge at Harland arose largely from the fact that, owing to the proximity of the Beckaguimic stream, the ice in the main river did not freeze over solidly, making the crossing very insecure in winter while in summer the water was often so low as to greatly interfere with the operation of the ferry.”

In actuality, it was the farmers on the opposite side of the river who truly benefitted from the bridge:

“The country opposite Hartland was peopled by a very energetic class of farmers, and the product they had to ship from Hartland station was very great.”

The structure was originally pitched as an uncovered toll bridge, which incensed officials. A headline in the April 7 paper reads: “Government Reviving Toll Bridges in the Province. This Return to Barbaric Ways Strenuously Opposed.” In the article it’s stated that “…toll bridges were a relic of medievalism, that should not be revived in the province.” 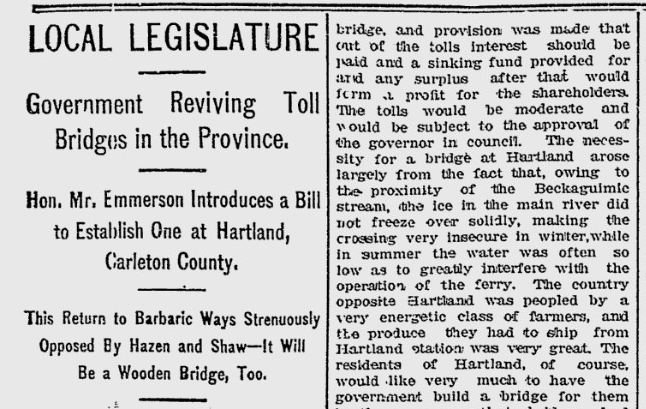 And yet, the town wasn’t given enough grant money to build a proper non-wood bridge so their hands were tied. The original estimate for construction came in at $90,000. But, when it came time to receive funding, the town was only granted $34,000.

The logic behind the official outrage was that privately-owned toll bridges have a limited lifespan. It seems that locals who live in the towns surrounding toll bridges quickly grow tired of paying a toll every day and within a few short years towns petition the government to purchase the bridge.

Hartland was no exception, the bridge was built in 1901 and purchased by the government of New Brunswick in 1906.

And, the religious folks were outraged too!

The wooden truss covering came in 1922. This was another source of outrage. Religious groups thought that adding a covering to the “kissing bridge” would lead to all sorts of acts of immorality and “destroy the morals of the young people.”

This didn’t stop the town from covering the bridge and the youth’s morals somehow remained intact. The only real inconvenience it caused was the need to haul snow into the interior during the winter so that horse-drawn sleds could pass through.

Of all the other stories told about the bridge, I love this one so much: “On May 13, 1901, Dr. Estey was the first person to cross the bridge before its scheduled opening, because he had to respond to an emergency call. Workers placed planks on the bridge so he could drive across the bridge.” – Wikipedia

I have so so many questions about this story: what did the doctor do before the bridge was there? Did the doctor have to take a boat or did he simply let people die because he couldn’t get to the other side of the river? How long were those planks because the bridge is really long? Was laying planks really faster than driving around? How is it that a small-town doctor in New Brunswick had one of the early automobiles? Cars in 1901 could run anywhere from $600-$1500 ($16,000 – $42,000 in today’s dollars).

0 comments on “This Covered Bridge has its own Google Doodle!”Add yours →