I was nervous about booking this trip. If you’ve ever been to Cartagena you’d know that the streets are filled with people selling island trips… this spills over to the internet where tons of suspicious websites will gladly take your money and then never show up on the day that you agreed upon.

The common scam (and by common I mean we talked to at least 3-people who were hit by this) is to book a tour of the Rosario Islands but then be taken to Playa Blanca. Playa Blanca is a public beach just south of the city that can be overcrowded and full of beach sellers pushing fake massages, trinkets, hats, etc.

We were looking for the secluded island experience; we wanted something quiet, authentic, and easy to book. Playa Blanca is as far away from quiet as you can get (and it’s not even in the Rosario islands).

But, knowing what is authentic is hard (check out all these negative experiences). We ended up booking through our hotel, which can be just as problematic as booking yourself (two of the 3-people we met who were scammed had booked through their hotel).

Our hotel is a part of an “internet referral chain” so their reputation is important. We decided to book a day trip through them and the company they recommend works with an eco-hotel called Isabela. This hotel sits in a quiet little cove on a tiny little island named Isla Marina next to the Isla Grande Rosario Island.

Getting to the Island

This part of the trip was rather seamless: a driver shows up, which completely not necessary because the wharf is a 5-minute walk from the old city; however, he does help you navigate the wharf, the wharf “tax” ($15,500 pesos), boat payment, and gets you to where you need to be rather quickly.

There was no waiting and in a very short time, we were on a boat listening to the captain explain in Spanish that we are going to a nature reserve (protect it), that we were on a speed boat (so keep our arms, legs, and head inside the boat), and that the trip could be rough with lots of water (so expect to be wet and to lose your hats/sunglasses/cameras if they’re not put away).

He then proceeded to blow a bugle and a bunch of boats raced out of the wharf as fast as they could go (which is slow while in the Port of Cartagena… but picks up once you leave the area).

When we arrived on the island, we were greeted by people who already had our names and were waiting for us.

We were given a welcome drink, showed to our place on the beach, given towels, and left alone to relax. The number of people allowed on the beach is limited and the people we arrived with were quickly absorbed into the scenery. This was exactly what we were looking for!

What is included in the price: transportation, beach chair and umbrellas, towels, a welcome drink, and lunch.

Separately, we secured a boat to take us out to snorkel on the reef (another post). Also, drinks and snacks are extra; we’ve become quite fond of the local drink limonata y coco, so this was the majority of our bill at the end of the day.

The lagoon is very small, and I’m not very good at sitting still for long so I meandered the island to see what I could find.

Many of these islands are inhabited by people who have lived here their entire lives; this is probably more true for the main island, but it looked to me like there was a community of people who live in little houses around Isla Marina.

There were some more elaborate but rundown buildings at strategic viewing points, which seemed completely out of place. I suspect these are part of the Pablo Escobar estate (another post). 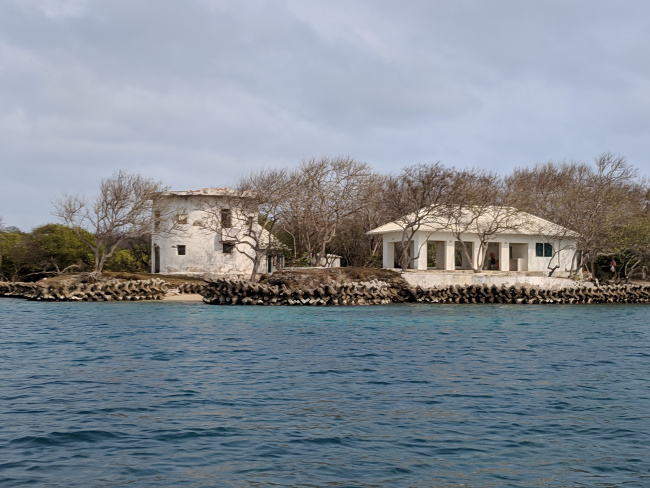 There are no sellers working the island (though there was a guy in a kayak who worked the boats in the lagoon). We did find a table where local artisans could sell their work; most of it was beautiful, unique local artwork.

Food is a simple but traditional plantain, fish and coconut rice. You can also choose chicken instead of fish. It’s all delicious. For extra, the kitchen will make ceviches and other simple but tasty local dishes. 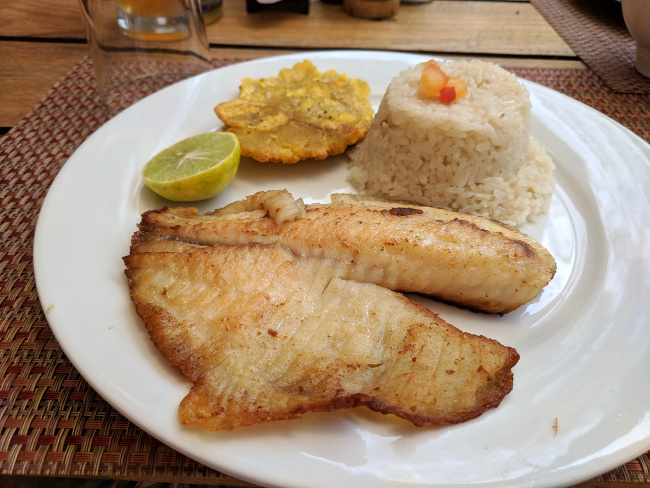 With the food you get to see the full cycle of catch to plate: someone ordered a lobster ceviche, one of the locals walked to a trap and pulled out a lobster, this quickly became a ceviche. Trap to mouth… very fast… very fresh.

Theory about the Rosario Island Tours

I could be completely wrong about my theory; but, this is what we observed.

There is a huge discrepancy in the costs between “tours.” Some are less than 60,000 pesos ($25) while others are in the 180,000 peso range ($68). It’s possible that with the lower costs you’re booking transportation to the islands, but not access to the islands themselves.

And, because much of the occupied, non-conservation land on the islands is privately owned (there are 27 islands, only 3 belong to the state), in order to land a boat, you need approval from the landholder. There are capacity limits for each of the beaches and these fill fast leaving boat operators trying to find a place to land, which explains why everyone races out of port quickly in the morning.

We saw several boats come into the lagoon, but none were granted the ability to land (though a few people swam to shore from their boat). And, for private boats, they anchored in the lagoon and kayaks brought them food and drinks but they weren’t allowed to come to shore. 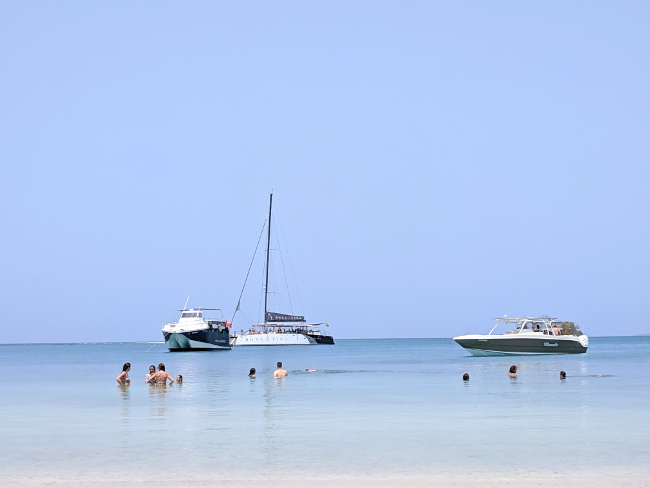 It was interesting to watch, but I think this may be the reason that many tours will only take you out to Isla Grande public areas, reefs, or to Playa Blanca, which isn’t even in the Rosario Islands. They’re not working with the people who own the private islands.

Overall, the experience with Isabela was exactly what we wanted and expected. It’s the perfect relaxing day trip.

0 comments on “The Rosario Islands: The Experience”Add yours →