This week starts with a new sassy LA girl. Seems the second week of improv added a layer of complexity and an attitude that is completely off the charts. Like whatever. Could be like puberty or something too. I have a very large bag of tricks for attitude… and have been saving the contents for years.

They thought she was cute, laughed, apologized, and then complimented her on her taste in shoes. To this day, I’m still trying to understand that interaction. 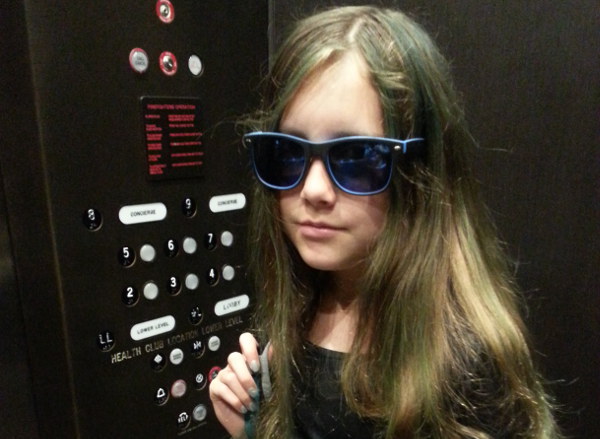 We’re no longer in Hollywood. I’ve wanted to stay in one of the LA beach communities since coming to the city in January (Santa Monica, Venice, Malibu, Marina del Rey). But, without a car, it’s nearly impossible to go back and forth to Hollywood.

We decided to stay in Marina del Rey for a couple of weeks when I found out that I was rolling off my project in August. I will say that I’d rather deal with LA traffic than Spongebob, Mr. Muscles, Spiderman, and that really annoying $5 sign mime guy on the Southside of the Boulevard. I wonder how many times a day that guy gets punched by people defending themselves from his aggressive miming.

(An aside from La Niña‘s improv class last week: Miming is the French form of self defence.)

Our view is of Mother’s Beach on the Marina. The view is a very relaxing, zen-like way to start every day. 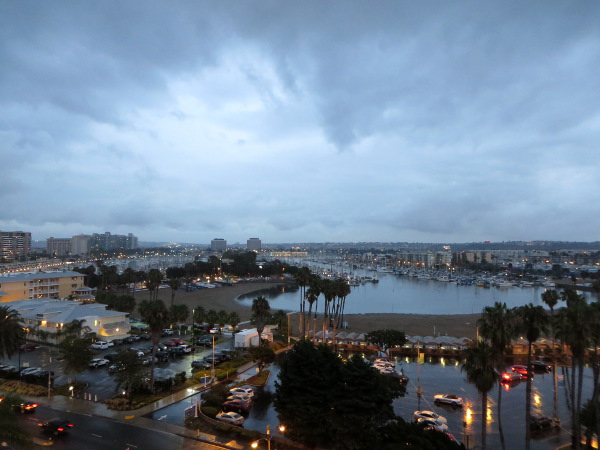 The food landscape has completely changed for us. If you were to look at LA food on a list from the highest quality to lowest, Hollywood probably is at the bottom of the list. We now drive through places like Culver City and on Melrose every day… and these would be near the top (if not at the top) of the list.

Here are some of the week’s food discoveries:

Mendocino Farms. There’s a Mendocino Kitchen next to Lyfe on Santa Monica Boulevard… and also one in Marina del Rey. Their sandwiches and salads are fantastic, cheap, and quick. All made from good quality food and are perfect for lunches.

dineLA. This week is the dineLA festival, which is a great way to try out new restaurants like Akasha, Lukshon, Cafe del Rey, and SugarFish.

Munchery. This is another chef-made, order by app, delivered to your location food service provided in LA. The only glitch in this service is that you need to find yourself a microwave to heat the food… and not all hotel rooms have a microwave (but sometimes you can ask and they will bring one to you).

Plant Food and Wine. I mention this restaurant because La Niña is a burgeoning vegan/vegetarian (she’s still weighing her options and tastes). So, she has recently discovered a love of really pretty food that incorporates plants and flowers into the presentation. Plant Food is one restaurant that uses edible flowers.

Hurricane Dolores put a wrench into the first day of this week’s surfing camp. Dolores is a tropical cyclone that hit Mexico and drove rain and swells up the coast into Southern California. As such, for three days, undertows, lightning, and poor visibility made it unsafe to surf. Though actually, as anyone from LA knows, it’s not the water conditions that are the problem, but actually all the garbage and bacteria from LA’s streets that wash into the ocean with the rain that are the problem… because this makes people sick. Bacteria levels in the water were too high for swimming and all LA county beaches were closed.

So, La Niña made a triumphant and sassy return to Steve & Kate’s (our emergency fallback plan) for a day so she could sew more jean purses and a pillow. She uses the pillow to sleep during the long drives.

Surfing for the rest of the week was hard… really hard. One of the harder things La Niña has ever done (and she does synchronized swimming and horseback riding). But by the end of the first day, she was able to “stand-up surf” and was constantly being told how natural she is with the waves. The “Hollywood attitude” quickly turned into surfing calmness and she made some great down to earth friends. 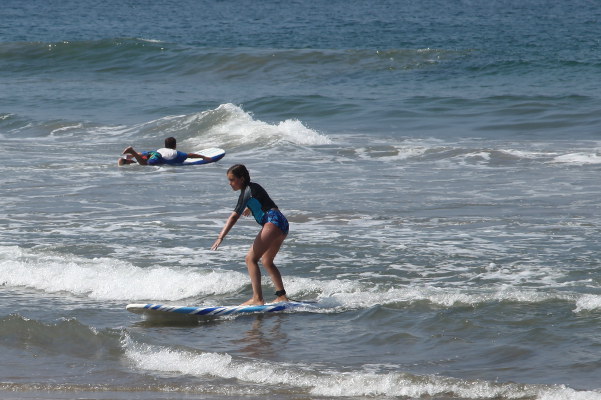 And, after 8-hours of surfing every day, I’d point her at some food and water (which she inhaled), point her at a shower (which she could barely complete), coat her from head to toe in aloe, and put her into bed for 12-hours. No more sassy LA girl…. just a quiet sleeping one who says, “I can’t wait to get back on the waves tomorrow” before falling asleep. My “surf-the-kid-to-zen” tactic from the bag of tricks worked this week.

One of the highlights was surfing every morning with a pod of dolphins. 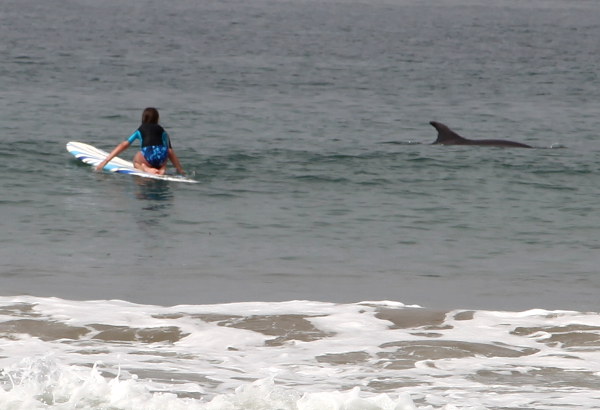 And, I did manage to capture a video…