Of the two deadliest nightclub fires in the United States, I unintentionally visited the site of both this summer. Until now, I’d not heard of either. They are horrifying stories and both are a harsh reminder of why fire codes exist.

Walter Barnes and the Royal Creolians were playing an one-night-stand in Natchez, Mississippi on April 23, 1940. The show was at the Rhythm Club, a good ‘ole fashioned shanty barn-like structure made of corrugated iron on the edge of town. 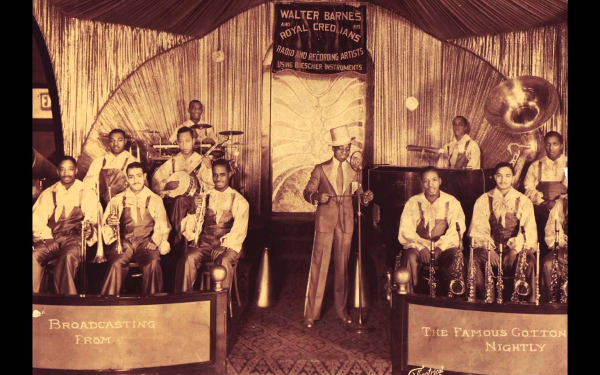 Signs were put up on telephone poles advertising a dance and the name of the band that’d be playing; word spread like wildfire throughout the town. The admission for the dance was 50c and people scrambled to pull together the cash needed to attend. According to people who lived through the event, “everybody in the Black community who considered themselves anybody was planning to attend that dance.”

The rafters were decorated with Spanish moss and flowers were laid out throughout the venue. The owner of the club (Ed Frazier) was so worried that people would try to avoid the 50c admission and watch the band from the outside that he nailed the windows shut. This meant there was only one way in and one way out of the building that evening.

As you can guess, this was a recipe for disaster. The actual cause of the Rhythm club fire has never been determined but it’s been attributed to a discarded cigarette butt that somehow ended up in the highly flammable, petroleum soaked (to keep bugs out) Spanish moss. 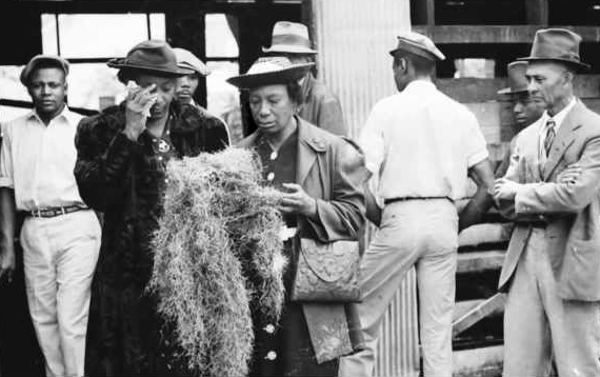 The effect was catastrophic and in a matter of minutes, the entire building was engulfed. Some news clippings say the roof fell down on those trying to escape, other reports say it was still intact after the fire. Photos show a building that was still intact.

Firefighters arrived fast and worked fast. The fire was out in 20 minutes but unfortunately, because the building was made of metal, when the water hit the fire it created steam which became superheated and within a matter of minutes, everyone that was still alive and trapped inside was killed by the steam.

The news articles following the tragedy weren’t kind or empathetic. Religious groups, politicians, and trolls all weighed in on the tragedy. They talked about the evils of dance clubs, excess, and sin. Fighting corruption and pushing for better fire codes became the cause de jour.

The impact was lifelong for Natchez (every year they still have a memorial ceremony). And, for those poor 60 souls who couldn’t be identified, they were not buried with dignity and grace. For 73-years, an unmarked mass grave in the Watkins Street Cemetery is where the majority of these bodies were unceremoniously laid.

In 2012 a memorial marker was finally added to the cemetery after a small documentary film brought visibility to the tragedy.

Other reminders of the tragedy in Natchez include a plague on the blues trail, a plaque listing the names of the victims, and memorial plaque that was erected in 2004 close to where the fire took place and near the entrance of the Rhythm Club museum.

I’d like to say that people learned from this fire and that the deaths of these innocents were not in vain. However, sweeping changes were talked about but not implemented and the US would repeat this tragedy two years later in Boston.

Cocoanut Grove was the place to be seen in 1940s Boston. Mobsters, movie stars, celebrities, and socialites all frequented The Grove and the night of Saturday, November 28, 1942, was no exception. It was Thanksgiving weekend, naval troops were in town, the Boston College football team had just played Holy Cross College and had lost but revellers were still enjoying a night out.

Luckily, a football celebration party that was scheduled to take place at the Grove was cancelled.

The Grove had a capacity limit of about 500 people but it frequently pushed the limits and on this particular night there were 1000 people at the Lounge. Like the Rhythm Club, the owners of Cocoanut Grove bolted the windows shut and chained the doors to keep people from leaving the building without paying. The only way in/out was the front entrance, which was a revolving door.

The walls and ceilings were covered with fire retardant cloth that had allegedly passed a burn test. The freon refrigerant air conditioning system had recently been upgraded because of wartime freon shortages and was outfitted with methyl chloride, a highly flammable gas.

As you can imagine, this is now a time bomb waiting to explode.

Like the Rhythm Club fire, the cause of The Grove fire is undetermined. Newspapers from the time reported that the first was caused by a busboy who lit a match so he could see while putting in a light bulb. However, fire investigators later disproved this theory and the boy was exonerated. This didn’t stop the press from crucifying the poor boy, however.

Today, the commonly held theory is that the fire started behind the wall in the Melody Lounge (under the coatroom and front entrance) and that the methyl chloride used in the air conditioning systems rapidly accelerated the blaze. It also came out during the inquiry that the club had faulty electrical wiring.

However, the official cause of the fire is listed as “unknown.”

The fire department was actually at the scene when the fire started. The first engine was responding to a car fire that was less than a block away when they saw all the commotion. Within a matter of minutes, there were 25-engines at the scene. The fire itself was put out fairly quickly and the rest of the time was spent taking care of the people injured in the blaze.

Many people died while trying to escape through the revolving door.

For the people that did make it outside, and they dropped like flies as the cold air hit their heated lungs… or for other reasons. Hospital workers say that those that made it to the hospital frequently suffered from an unknown acute pulmonary event. One minute they were ok and the next they were dying. The suspicion was that these victims were exposed to a toxic substance.

The reason this fire wasn’t the deadliest single-building fire in American history is that this was the first time that penicillin was used in large scale to prevent infection from burns (there were lots of learnings from this); also, the doctor in charge of the burn victims was a researcher working to improve treatments for burns for those fighting overseas.

Thanks to the success in treating the Cocoanut victims, both penicillin and new burn treatment methods were approved for use with the soldiers fighting overseas. 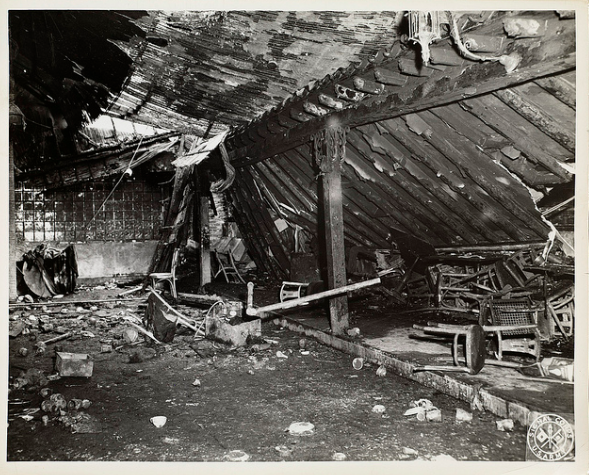 This is still considered the deadliest nightclub fire in the world. And, in stark contrast to the Rhythm Club fire, the Cocoanut fire was a big deal for Boston and the rest of the United States because it killed soldiers, movie stars, musicians, socialites, and sports fans who wanted a drink after the Boston College football game.

If more attention had been paid to the Rhythm Club fire (instead of mansplaining the evils of excess around town and in the news), perhaps all these deaths could have been prevented.

As such, the message got through this time around and there were sweeping and aggressive changes made to fire codes and laws throughout the United States.

For many decades after the fire, the lot which housed the night club sat empty and the streets changed. In 2013, the street running over where the fire happened was renamed Cocoanut Grove Lane. 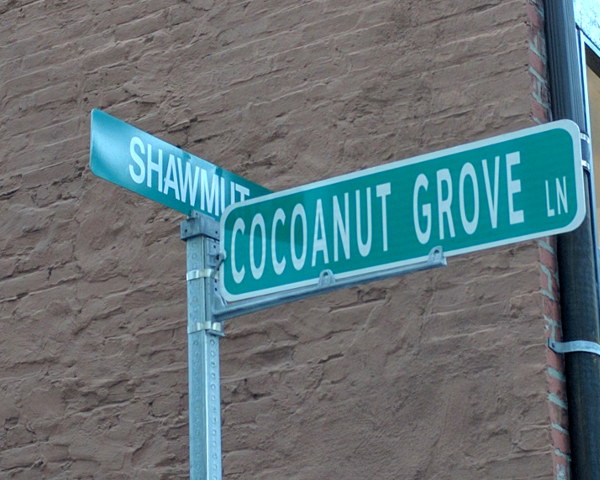 In 2014, luxury condos were added to another portion of the fire site and during the construction the plaque created by the youngest survivor of the fire was moved to a new location a block away. 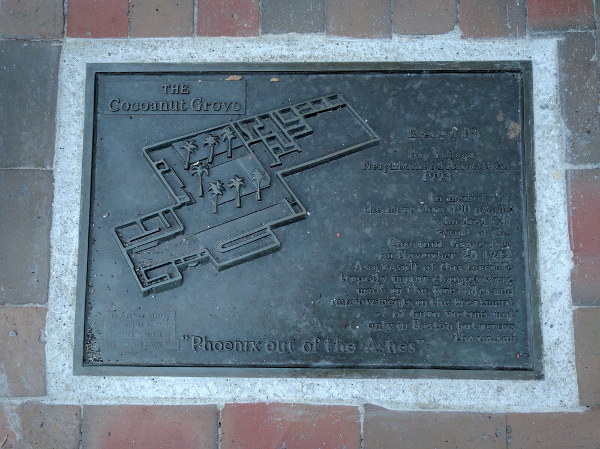 This area feels off — something kept pulling my hair and it was really difficult to breathe while walking around… strangely because it felt unexpectedly hot (if anything I was expecting cold). I passed a couple who were looking to purchase a condo in the building. The agent disclosed the building’s history. “We don’t care about those things. That doesn’t bother us because it was a long time ago.”

I’m excited about this couple: to be purchasing a property in the Bay Village community is a big deal. But I’m not sure I could live here, especially in the unit that now sits over what was once the revolving door. My brief walk ranks up there with Vicksburg, the Preston Castle, and the mausoleums at the Hollywood Forever cemetery… and I really wanted to leave the area quickly.

0 comments on “The two deadliest nightclub fires in the U.S.”Add yours →