I arrived at the Richards DAR House in Mobile by accident. I was in the community looking at some of the old Southern houses and wasn’t expecting to find a museum… but I did, and it was open.

In a nutshell (from Wikipedia), The house was built in 1860 for Charles G. Richards, a steamboat captain, and his wife, Caroline Elizabeth Steele. It remained in their family until 1946 when it was purchased by the Ideal Cement Company. That company renovated it for office use in 1947. It was turned over to the city of Mobile in 1973, which then leased it to the Daughters of the American Revolution for operation as a museum.

Like mentioned, the Richards House is a Daughters of the American Revolution (DAR) site meaning it is funded, preserved, and staffed by volunteers from DAR. These women have taken it upon themselves to preserve history.

I was lucky enough to get a solo tour because they’d just finished a big weekend event and it was a “quiet day.” A personalized tour made it better because I could ask the things that I want to ask… like tell me a ghost story or a juicy historical tidbit that no one else knows.

I’m told that the house has plenty of ghost stories. It was investigated several times by various paranormal organizations; the most recent being by Delta Paranormal Project Alabama, which proved to be very lucrative: photos had apparitions, recordings had voices, EVP spiked frequently.

Another well-known investigation is by a Ghost Hunters team, which wasn’t so lucrative. However, a photographer from the Mobile Bay Monthly Magazine named Dennis Holt was there during the investigation and he did take a photo with a mysterious figure in it.

I tried to debunk the photo.

This is a digital photo taken on a SONY DSC-V1 with infrared and the investigation team uploaded this photo to their website in its original, untouched format. I looked at the hidden EXIF data encapsulated in the image and confirmed that it is completely untouched (no Photoshop), was taken Saturday 2007:07:21 18:35:18, no flash, no double exposure, and, not a great camera (which can cause small anomalies because it doesn’t handle light well).

But, the photo could be the photographer’s shadow. There is a light source (look at the light and the cabinets) that’s not outside light (on 2007:07:21 18:35:18 the sun was still high in the sky) and it’s possible it could come from behind the photographer… 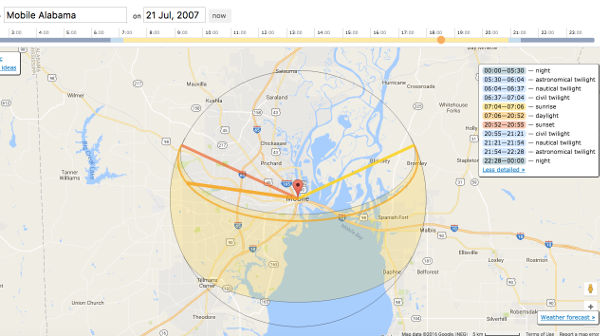 …but I tried to replicate creating a shadow with no head and couldn’t do it; also, the light source goes right through the head (look at the windows).

Later, the investigators later said that there was a video camera behind the photographer that had an infrared illuminator attached to it. This could have been picked up by the SONY DSC-V1 and would have created a partial shadow of the photographer.

But, I digress away from the ghost stories…

The best story is about marbles; the house is famous for its moving marbles. Volunteers put marbles on the bed of what is now being used as a children’s bedroom for the “children ghosts” in the house. I was told that four children died in the house: Frances (10-years old), Anna (1-year old), Florence (5-years old), and Joseph (3 mos old); as well, Caroline Richards (1867) died after giving birth to Joseph.

According to the ladies. these marbles frequently move around the bed when no one is in the room. Someone should try and catch this on video… it would go viral and make money for the house! They should get those ghosts working for them. I’m just sayin’.

The amazing thing about discovering the Richards DAR House wasn’t the ghost stories or the history or the interesting stories. It was having tea with two members of the Daughters of the American Revolution. After the tour, the ladies invited me to sit and have tea with them. We sat for over an hour and just talked about travel, the South, history, and our families.

Both ladies at the Richards house were extremely smart women. In particular, one of the guides was an astronomer who worked for NASA and who spent her entire life studying and chasing eclipses. She was in her 70s, so she would have worked for NASA for the first moon shot.

In her retirement, she spends her time coaching people new to the field and planning trips around the world to see some of the most elusive and difficult to find astronomical anomalies. She talked for a long time about NASA and eclipses.

I love this kind of girl brainpower; it enhanced the experience of the tour and made my day much much better.